Home World What kind of post-corona world do Europeans want? 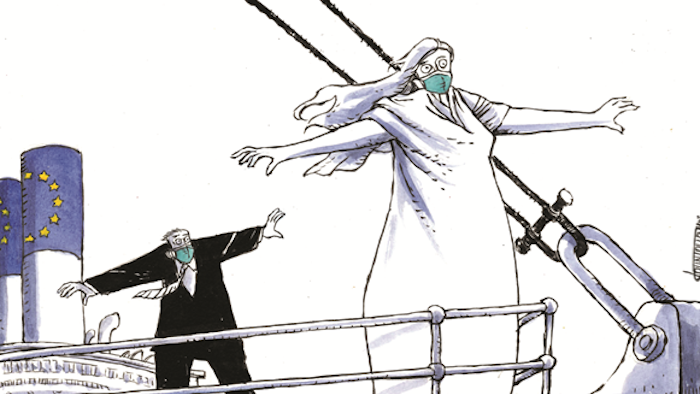 What kind of post-corona world do Europeans want?

The current epidemic is bringing political tightening, economic downturn and social disruption, but it might also be an opportunity for radical change towards a more fair, democratic, and open Europe, says Timothy Garton Ash.

The coronavirus crisis seems to be encouraging belief in radical change. An astonishing 71% of Europeans are now in favour of introducing a universal basic income, according to an opinion poll designed by my research team at Oxford university and published recently. In Britain, the figure is 68%. Less encouraging, at least to anyone who believes in liberal democracy, is another startling finding in our survey: no less than 53% of young Europeans place more confidence in authoritarian states than in democracies to tackle the climate crisis.

Our poll was conducted by eupinions in March this year, as most of Europe was locking down against the virus, but the questions had been formulated earlier. It would be fascinating now to ask Europeans which political system they think has proved better at combating a pandemic, as the US and China, the world’s leading democracy and the world’s leading dictatorship, spray viral accusations at each other.

Those two contrasting but equally striking survey results show how high the stakes will be as we emerge from the immediate medical emergency, and face the subsequent economic pandemic and its political fallout. What kind of historical moment will this turn out to be, for Europe and the world? It could lead us to the best of times. It could lead us to the worst of times.

The proposal for a universal basic income was until recently often dismissed as far-out and utopian. But during the anti-pandemic lockdowns, many developed countries have introduced something close to it, not for everyone, to be sure, but certainly for large parts of the population. Spain’s economy minister has said that its ‘minimum vital income’ could become a permanent instrument in the country’s system. Hardly a day passes now when I do not read another article suggesting that universal basic income, or some variant of it, is an idea whose time has come.

This would be one ingredient of a possible future in which we manage to turn one of the greatest crises of the post-war world into one of its greatest opportunities. We address the soaring inequality, both economic and cultural, which has been eroding the foundations even of established liberal democracies like Britain and the US. Having learned during the lockdown to work in different ways, more from home and with less unnecessary travel, we turn this into a new life-work model. Having appreciated the cleaner air and clearer skies, the sounds of birdsong not drowned out by traffic and the slow changes of nature that we had previously been too busy to notice, we will get serious about taking the radical steps needed both to address climate change and to give us a better quality of life.

After turning out on our balconies and rooftops, all across Europe, to applaud the doctors, nurses, social care and other essential workers who have been risking their lives to save our own, we do not forget them once the medical danger has passed. Not only do they get a better deal socially and economically – the post-war slogan ‘homes fit for heroes’ comes to mind – but there is also what Polish populists slyly call a ‘redistribution of respect’. And in making that necessary redistribution, we also deprive the nationalist populists of their electoral appeal.


At the same time, we recognise that a planet stalked by genuinely global threats such as this virus and climate change requires more international cooperation not less. And the EU, which earlier this week convened an international meeting to raise funds for fighting Covid, becomes a prime mover of global collective action.

That’s the dream. But then there’s the nightmare. This may be a post-war moment, but it turns out more like the years after the First World War than post-1945 liberal and social democratic reconstruction. The nationalist impulses we see in Donald Trump and Xi Jinping become even more pronounced. With beggar-my-neighbour policies, the post-Covid recession descends into a great depression. Inequality soars, rather than being diminished, both within our societies and between different countries.

In Europe, wealthy north European countries such as Germany and the Netherlands simply don’t show the necessary degree of solidarity with the battered economies of South European Eurozone members. Instead, they use the EU’s crisis-justified suspension of limits on state aid to pump public funds into their key industries, and the gulf between northern and southern Eurozone states grows wider. In a couple of years time, a populist like Matteo Salvini, or someone even worse ( yes, it’s possible), gains power in an Italy where public debt is now about 160% of GDP and blames all the country’s woes on a lack of north European solidarity.

Meanwhile, in the eastern half of the continent, Hungary remains a dictatorship, with Viktor Orbán’s temporary emergency powers mysteriously becoming permanent. Poland, where the governing party is currently, grotesquely, insisting on carrying out entirely by postal ballot a presidential election which cannot possibly be free and fair, follows down the Hungarian path. The EU, no longer a community of democracies and torn along both axes, north-south, east-west, gradually weakens and disintegrates. Left to their own devices, its member states fail to provide adequate job prospects, social security and an ecologically sustainable future for their younger citizens. And so, as already shockingly foreshadowed in our poll, they turn to authoritarian solutions. Europe looks ever less to the US, ever more to China.

Come 2030 we probably won’t have either this hell or that heaven, just some version of our usual human purgatory. But which variant we come closer to is entirely up to us: to Americans and Chinese, Russians, Indians and Brazilians, of course, but in Europe, it’s up to us Europeans – including the post-Brexit British of course, who are still Europeans, whether they like it or not. That’s why, on the Oxford website which presents our survey results, we have also set up a self-interview facility for anyone with 10 minutes to spare at home to tell us your formative, best and worst European moments, and your hopes for Europe in 2030. Thus far, the fall of the Berlin Wall has been the most widely mentioned formative moment and Brexit the top-scoring worst moment. But maybe this coronavirus moment will overtake them both. Come and tell us on europeanmoments.com.