Home World ‘We want a Europe that cares and is taken care of’ –... 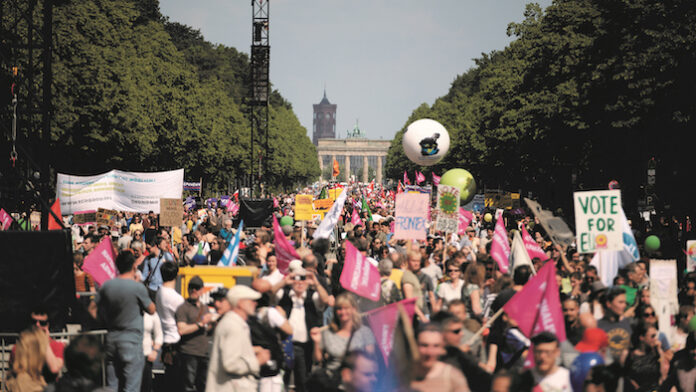 On 9 May, Europe Day, the Citizens Take Over Europe alliance launches its Assembly, a citizens’ conversation on the future of Europe. The Assembly is necessary because civil society has been sidelined from the Conference on the Future of Europe promoted by the European Union, explain the representatives of the initiative, Marta Cillero, Michele Fiorillo and Martin Pairet.

Michele Fiorillo: The Covid19 crisis has transformed a tragic global pandemic into a new systemic crisis of the European Union. The Conference on the Future of Europe, supposed to be launched in Dubrovnik on 9th of May, had to be postponed to a date still unknown. In any case, there was no institutional agreement between the Commission, Parliament and European Council about the scope, methodology or objectives of this Conference. Based on what had been proposed by these institutions, many civil society organizations were already criticizing the structure of the Conference and its methodology, for giving civil society only the most marginal of roles. None of the inspiring participative and citizen-led methodologies used with success in Ireland or Belgium recently, for example, were taken into consideration.

Our ambition with the Citizens Take Over Europe alliance is to demonstrate that we are ready to take the lead and have a say about our future, putting citizens and residents at the centre of the conversation about the future of Europe. And not only that: we believe it is crucial for people in Europe to organise across borders to push forwards the Europe we want: a Europe that cares and is taken care of.

Is it the beginning of a long-term process led by civil society? Could you describe it?

Michele Fiorillo: The 9th of May will be the first step for the opening of a transnational public space. A Citizens Conference on the Future of Europe, in the form of a European Citizens Assembly, could be a powerful instrument to organize this civic mobilization. Experiences like the Irish Citizens’ Assembly or G1000 have shown how citizens could powerfully deliberate together for the common good. On the 9th of May we will issue our grassroots “Schuman declaration”, kicking-off a process for a self-organised European Citizens’ Conference to be built and take place over at least the coming 2 years, in which people can have a say about our present and future. We have to ensure that citizens and civil society participation are at the heart of all new initiatives for the future of Europe.

We need to introduce a fundamental and bottom-up energy to reimagine our relation to Europe at a moment when top-down governance is threatening the idea of European solidarity and risks dividing our societies even further. This process may lead also to the birth of a civic pouvoir constituant able to create a truly European demos – or even a European nation – and ultimately a democratic EU constitution. To achieve all that we need our transnational ‘Tennis Court Oath’ of European citizens and organizations -maybe in alliance with the EU Parliament- willing to join this ambitious experiment. The moment is now.

How do you see the growing role of civil society groups in reshaping the presently fragile European project? What is their leverage?

Marta Cillero: The Citizens Take Over Europe alliance, and citizens all over Europe, have multiplied petitions, open letters and projects through the financial, migration and health crises. For the first time, our coalition has brought together European civil society organisations in an unprecedented way to challenge European institutions with our own plan for renewing democracy. Our role as transnational civil society is to launch our own process for the Future of Europe, amplifying often unheard and marginalised voices, which institutions and governments cannot ignore.

We need our own European Citizens’ Conference: a transnational assembly able to summon the vision and ambition that our leaders are dramatically failing to show. We believe the millions of European citizens and residents that are currently directly affected by the Covid-19 pandemia see the direct impact of the lack of solidarity between European Member-states. Organised civil society has the responsibility to open up political space to address the direct concerns of people in Europe, and we believe now is the right time to demand the appropriate channel to the institutions to ensure people are always at the centre of decision making.


Are they working beside political parties or sometimes hand-in-hand? What are their relays with the political world?

Marta Cillero: Civil society groups need to work beside political parties to preserve their role as counter power to traditional governance structures as well as their capacity to critique government‘s accountability to citizens needs. Our mission is also to propose alternatives to citizens on how to better govern ourselves, create the conditions for decision making that puts citizens and residents of Europe at the centre. Relays and allies in the political world are essential to reach our goals: we need to work with traditional structures of power to set the basis for a genuinely participatory democracy in Europe. However, often, civil society endeavours for change are at risk of being instrumentalized, and be a token for many political parties and governments to legitimate their actions. In France, for example, where a truly participatory Citizens Conference on Climate Change (Convention Citoyenne pour le Climat) took place until April 2020, it is still yet unsure if the policies the citizens articulated will actually be turned into reality. As civil society actors, we have to be always aware of this tension when working with traditional politics.

Civil society is weakly anchored in the European Union decision-making system, and easily ignored: that is why it is so important that we use this unprecedented crisis to create a unity between many dispersed civil society actors across Europe, and take the initiative to organise in ways that cannot be bypassed.

How effective are their actions and proposals to revive the values of cooperation, equality and solidarity, initially at the heart of the original European project?

Martin Pairet: In the crises of the past decades, European politics has failed to organize solidarity with the most marginalised, Roma, migrants and other European citizens alike. Too often, as civil society actors, we hear the argument that this failure is due to the lack of competency of the European institutions over certain areas like migration or health. But, often, alternative solutions do exist, and could be promoted, and ball-passing between national governments, and European institutions is no way of escaping responsibility. Millions of people have organized across borders to support the most marginalized in our societies and developed alternative governance platforms locally that reinvent the way we live and take decisions about our lives. Their actions have proven that alternatives are possible and are already implemented by citizens themselves.

How did those values get lost and why did the top-down governance failed to meet the needs of Europeans? Could civil society manage to strengthen a fragilized democracy in a growing number of Member states?

Michele Fiorillo: The European project has been stuck for more than a decade. Conflicting “raison d’Etats” are blocking the EU Council, and so the Union cannot deliver as it could with a more democratic, transnational governance looking at the European people as a whole. We have a common market, but not a common social policy for all the continent, and this is undermining the legitimacy of the EU, fostering the national-populistic forces. Without the building up of a civic transnational counter-power able to make pressure on the Council and the other institutions, Europe will not make further decisive steps towards the needed direction.

No single State will save itself from a catastrophe of the Covid19 Crisis if it will not act together with the others in cooperation to move towards a stronger Union, and the European Union will be unable to fulfil its global responsibilities of solidarity with other countries if it acts in a divided and beggar-thy-neighbour manner. We believe that this is something that European citizens are everyday more aware of. And we are sure that Europe will change and become more democratic, free and equal, also through the bottom-up process we are inviting everyone to join and shape together with us a permanent transnational European public space for deliberation and citizen participation.

How the pandemic is affecting Spotify use – VoxEurop (English)