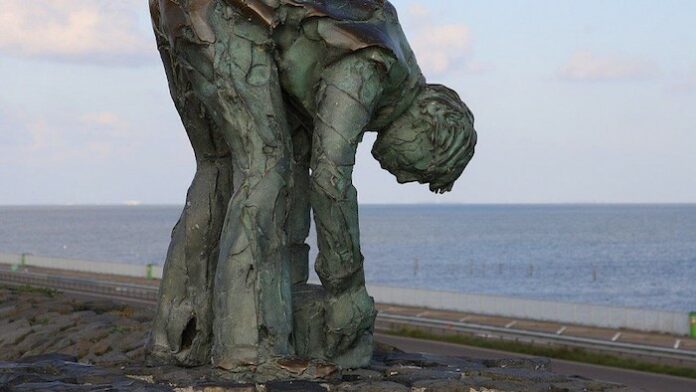 European countries are set to invest up to 2.82 billion euro by 2100 to avoid losing as much as 1.27 trillion euro due to climate-driven coastal flood damage, a new analysis by the EU Joint Research Center shows.

In the next 80 years, European countries will have to pay a total yearly amount of between 1.75 and 2.82 billion euro to reduce damages caused by coastal flooding, according to a new study by the Joint Research Center of the European Commission (JRC), published in the peer-reviewed Nature Communications. The range of the estimate reflects uncertainty as to whether global economies will go green, thus curbing global warming, or will keep emitting carbon at current rates.

Indeed, whether emissions are low (RCP 4.5) or high (RCP 8.5), the melting of ice caps and thermal expansion of water will also be proportionally lower or higher, triggering a mean sea level rise between 50 or 80 cm (possibly exceeding 1 metre) by 2100.

With the economic slowdown induced by COVID-19, fuel consumption and greenhouse gas emissions have been temporarily reduced. Ironically, the spread of the coronavirus has provided a temporary window onto what full-scale mitigation of global warming would look like.

But things could flip back around as soon as the health crisis is contained. “In the wake of the pandemic, with governments aggressively boosting economic recovery, emissions could remain at their pre-outbreak levels, rather than decreasing according to the Paris Agreement and the EU Green Deal plans,” remarks Michalis Vousdoukas, lead author of the JRC study. “In this event, the projected costs of coastal flood mitigation would be closer to their higher bound.”

The cost-benefit analysis by the JRC shows that, once the costs of the protection measures are discounted, in the low or high climate change scenarios Europe could save either 200.1 billion euro (96 percent of coastal flooding costs) or 1.24 trillion euro (98 percent) in the next 80 years. This would require raising the height of coastal dykes by either 0.92 or 1.04 cm, on average.

In other words, in the absence of such pre-emptive measures, either 209.8 billion euro or 1,27 trillion euro will be lost due to the combined effects of sea level rise, and storm and tidal surges.

Lack of action would result, at best, in 1.6 million or, at worst, 3.9 million flood victims among the 200 million Europeans living within 50km of the 100,000 km coastline stretching from the North–East Atlantic and the Baltic to the Mediterranean and Black Sea. In addition, current trends indicate that migration toward coastal zones will continue.

At present, coastal flood losses in Europe amount to 1.4 billion euro per year (based on 2015 values). Each year about 100,000 citizens are affected by coastal flooding which, by the end of the century, will increase the most in France, the UK and Italy, as well as Denmark. The first three countries have the longest and most vulnerable stretches of shoreline, with valuable properties and infrastructures, with the highest adaptation costs as a result.

In the UK, the economic benefits would exceed the costs of raising dykes (construction until 2050 and maintenance until 2100) on only up to one third of the seashore, as opposed to France and Italy, where over half of the coastline could be profitably protected.

The JRC researchers found that, overall, costs would outweigh benefits along 68–76 percent of the European coastline. For this reason, they suggest raising dykes only along approximately a third of Europe’s seafront, precisely where the population density is greater than 500 people per km2. In these areas, higher defensive walls could save 83 percent of the population from flooding.

The mean benefits-to-costs ratio (avoided damages relative to dyke investments) should vary from 8.3 (low carbon) to 14.9 (high carbon) at the European level, and between 1.6 and 34.3 at the national level. This means that per every 1 euro which is invested, tax-payers across different countries would save either 1,6 euro or 34,3 euro, depending on how much the flooding risks and their expected damages grow in the future. These benefits will be highest in all areas with strong socio-economic growth which are vulnerable to severe coastal inundations associated with sustained greenhouse gas emissions.

After implementing additional protection, Europe will still be affected by residual financial and humanitarian burdens due to coastal flooding. Estimated unavoidable losses amount to either 8.88 (low emissions) or 24 (high emissions) billion euro, with between 653,000 and 1.34 million flood victims. The UK will continue to lead the ranking with a 1.77 or 3.6 billion euro toll on public coffers, and 252,000 or 536,000 flood victims.

In the worst-case scenario, regardless of improved protection, Scotland, Ireland, Denmark, Romania, Croatia, Cyprus, the Italian region of Sicily, the Spanish region of Andalucía, the French regions of Bretagne and Provence, and the south east Baltic Sea will see financial losses exceeding 300 million euro towards the end of the century. The populations around Puglia, Croatia, the Ionian Islands in Greece, the Basque country, the French regions of Basse-Normandie and Nord-Pas-de-Calais, Scotland, Ireland and the south east UK, will be most at risk. In all these areas, if carbon emissions fail to drop to the lowest levels recommended by scientists, higher dykes will not be enough to save a total of 15,000 people from rising waters.