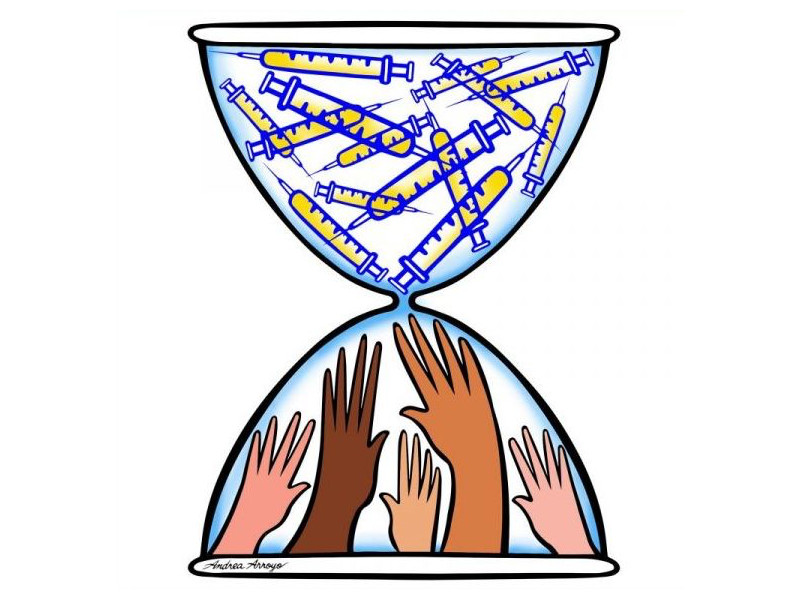 “No one is safe until we are all safe.” The message repeated relentlessly by European health authorities and governments is intended to convince sceptics of the benefits of Covid-19 vaccination. but the campaign has been less than inclusive. Since the beginning of the pandemic, vaccines have proven to be difficult or impossible to access for the most vulnerable groups in society, such as people in detention, the homeless and undocumented residents.

While a sense of invisibility is all too widespread among these groups, undocumented residents are officially invisible: no census has been carried out at EU level since 2009, when their numbers were estimated to be between 1.9 and 3.8 million people. In this context, trying to count the number of illegal residents who have managed to benefit from vaccination programmes in EU countries and in the UK is almost impossible. That is why the nonprofit investigative newsroom Lighthouse Reports, in collaboration with the Picum network (Platform for International Cooperation on Undocumented Migrants), decided to carry out a study comparing and contrasting the situations across Europe: the policies adopted by EU countries and the UK concerning the vaccination of undocumented residents.

The result of this survey is an extremely clear and comprehensive comparative table, covering 18 countries assessed on the basis of five criteria: transparency of vaccination strategies; access provided (or not) to undocumented residents; identification and residence requirements, if any; conditions of access to vaccination for other marginalised population groups (detained, poorly housed, without internet access, or who do not speak the local language); and finally, safeguards for privacy, a key indicator when “illegal” status can lead to arrest.

At the top of the list are the United Kingdom and Portugal, which have adopted “open and accessible” vaccination policies with regard to undocumented residents. This is in contrast to Poland, the Czech Republic and Slovakia, whose policies are defined as “explicitly exclusionary”.

The majority of the analysed countries were placed in the “Confused” category. “These are countries whose policies are extremely vague when it comes to vaccination of the undocumented and other related policies,” says Eva Constantaras, Data Editor at Lighthouse Reports. “We didn’t anticipate this being so common. The Confused category includes countries that may in fact be doing better in practice than they are doing on paper, but also those who in reality might be actively excluding undocumented people even though they don’t openly declare this. In most cases governments use the anti-immigration arguments to win popular support, but at the same time realise that not vaccinating a – sometimes substantial – part of their population is actually a very bad policy decision that endangers public health. So policies are kept vague on purpose, we suppose, to allow governments to have it both ways.”

As Picum’s Advocacy Officer Alyna Smith points out, “in countries where access to the healthcare system is generally closed to people with irregular status, access to Covid-19 vaccination is equally complicated. On the other hand, in countries that have a legal framework providing access to health care for these people, such as Belgium, France, Italy and Spain, access varies according to different factors. Indeed, despite a favourable legal framework, administrative obstacles often remain significant, and “there is a strong reliance on NGOs to facilitate access to vaccination for undocumented residents”.

Other countries such as Germany are characterised by complex public health policies, which have inevitably hampered vaccination campaigns. However, “the regionalisation of these policies has also led to practical solutions at the local level,” notes Alyna Smith.

The results were confirmed by a series of investigations carried out by European media outlets as part of this project, to be published as a series by Voxeurop. Journalists have verified the real effectiveness of these vaccination campaigns (or lack thereof) and described the obstacles encountered by undocumented residents. In Portugal, the daily Público followed Mohammed and Diego struggling to access a vaccination presented as easily accessible, who end up finding informal solutions. This experience is similar to that of Fred, who has lived in Belgium for ten years, as described by the weekly Knack.

Given how lack of clarity in vaccination strategies is one of the principal challenges, Lighthouse Reports has also assigned a confidence index to each Member State to help frame the results of this survey.

In many countries, poor communication strategies and fear of dealing with authorities have limited the effectiveness of Covid vaccinatio campaigns for the undocumented. “Trust is essential”, confirms Luxembourg MEP Tilly Metz (Greens/European Free Alliance), who has seen enough evidence in her country, Luxembourg (not included in the Picum/Lighthouse Reports study). Thanks to the “proactive approach” of the Association de soutien aux travailleurs immigrés (ASTI) and the Comité de liaison des associations d’étrangers (CLAE), two organisations set up some 40 years ago, a vaccination campaign targeting undocumented residents has been set up in collaboration with the Ministry of Health. “A well thought-out initiative,” says Metz, “based on a trial-and-error approach: trust is built.” Thus, she explains, in addition to guarantees concerning the use of personal data for exclusively health-related purposes, the campaign organisers wanted, for example, the security guards present in the vaccination centres to wear civilian clothes. For its part, the government preferred not to publicise the launch of this targeted vaccination campaign, “remaining discreet to avoid the subject being politicised”.

Given the first phase of the pandemic, “the politicisation of the vaccine certainly doesn’t help”, notes Alyna Smith, Advocacy Officer at Picum. However, Smith points out that the systems in different countries can still adapt, each with its own dynamics. “In some countries, the state must first recognise the existence of undocumented residents. This is the case in Slovakia, where a large proportion of the workers are housed by their employers, often far from urban centres.

In other cases, such as in Greece, developments have been – at least on the surface – faster and more positive than expected. On 2 October 2021, the government issued a law (4839/2021), including a provision allowing undocumented residents and stateless persons to obtain a temporary social security number in order to access vaccination. While very encouraging on paper, this provision was to be implemented through the joint decisions of the ministers of health, digital, labour and social affairs, and the minister of  migration and asylum. According to the daily Efimerida ton Syntakton, however, by mid-November two of the three ministerial decisions had still not been published, and the situation remains dramatic for many of the undocumented, especially in the poultry farms in the north of the country, where the paper investigated

“From our scorecard and from our country level investigations, it seems governments across Europe have failed to rise to the occasion and will get away with abdicating any kind of responsibility,” says Eva Constantaras, who fears healthcare for the undocumented could be forgotten.

While this access has always been complicated in the majority of European countries, says Alyna Smith, “the pandemic has made abundantly clear that this is not only wrong and unfair, but also foolish and self-defeating. If we want to live in a healthy society, we have to proactively address this kind of baked-in exclusion”. Despite positive measures taken by certain countries in 2021, “this alone won’t address the systemic barriers they face in accessing health care more broadly, or broader health inequalities in this population linked to systemic factors like poor working conditions, and a pervasive environment of criminalisation. We need to design systems that effectively put health needs before residence status.”

At Picum, which brings together 164 organisations in 32 countries, mainly in Europe, “the picture drawn by Lighthouse Reports will help fuel a dialogue among our members,” says Alyna Smith. “They will appreciate it as an advocacy tool, but also to enrich the reflections within the network.

As The Lancet reminded us in an editorial published before the start of the pandemic in June 2018, there is “no public health without migrant health”. A principle that most European governments do not seem ready to accept, as they face an unprecedented public health crisis.