Home Politics The UN rebukes Donald Trump in his hometown 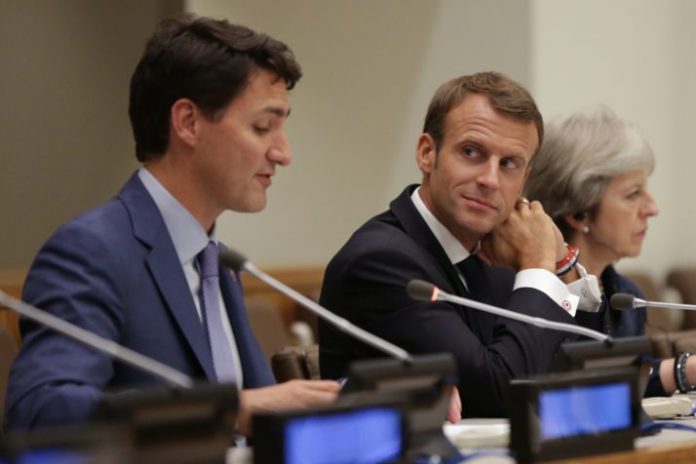 UNITED NATIONS — Foreign leaders came to President Donald Trump’s hometown of New York this week. But they refused to show the U.S. president the fealty that he’s come to expect from Republican lawmakers, conservative groups and even businesses.

Over three days at the United Nations’ annual meeting, heads of state and diplomats repeatedly took issue with Trump’s go-it-alone, “America first” foreign policy pronouncements. At a U.N. Security Council meeting that Trump chaired on Wednesday, the criticisms of his foreign policy rolled in overtly and obliquely. And in a remarkable moment on Tuesday, an entire audience of diplomats laughed at Trump when he boasted about his accomplishments during a speech before the General Assembly. The rest of his address was met by silence and at the very end, polite, muted applause.

Trump showed off his own lack of interest in the institution of the U.N. He arrived late for his own speech on Tuesday before the General Assembly, with no explanation, and spent just 30 minutes at a cocktail reception that evening at the United States Mission of the U.N., where the lobby is adorned with an Alexander Calder statue titled “Peace.”

Each night, Trump returned to his penthouse in Trump Tower while diplomats and foreign leaders roamed around midtown Manhattan, ferrying between cocktail receptions, hotel bars and dinners.

Even previous U.S. allies — like Canada — took a more distant approach to the U.S. at the U.N. gathering. Trump did not meet with the Canadian Prime Minister Justin Trudeau for any public meetings this week, though the two briefly shook hands at a luncheon reception. 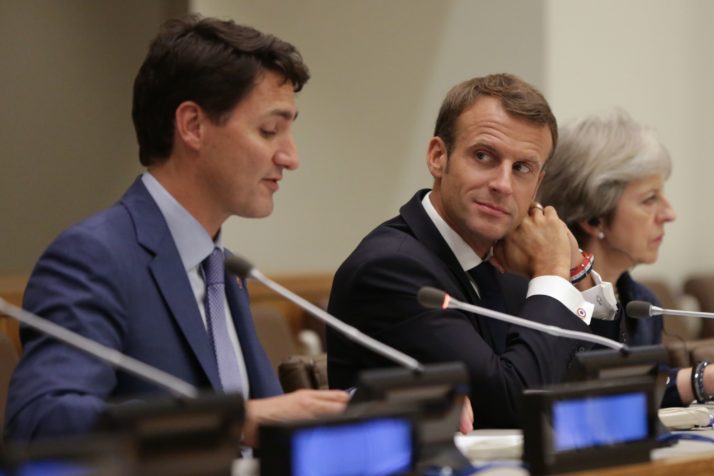 The reaction is starkly different from how Trump is received in D.C. — where many are fearful of incurring the president’s wrath politically, or becoming a target of one of his tweets — and at the rallies he flies to around the country, which are packed with adoring crowds.

But in New York this week, Trump’s applause lines at rallies — bashing the Iran nuclear deal or China’s trade practices, for instance — were instead met with shrugs, smirks and and silence.

After Trump blasted Iran at the security council meeting he chaired Wednesday, French President Emmanuel Macron pushed back. France and other global powers are still trying to save the deal, which lifted sanctions on the Middle East country in exchange for curbs on its nuclear program. Trump has said he wants a broader deal with Iran that tackles other aspects of the Iranian regime’s behavior, including its ballistic missile program and sponsorship of terrorism.

“We need to build together a long-term strategy in order to manage this crisis and it cannot boil down to just sanctions and containment,” Macron said.

Smaller countries were especially unrestrained in going after Trump, as the meeting offered a rare opportunity for them to raise their concerns to Trump with everyone else watching.

Macron’s comments also came one day after the French leader vowed that France would not support trade agreements with countries that are not part of the Paris climate accord — a clear signal aimed at excluding the U.S. after Trump withdrew the U.S. from the pact last year.

The Trump administration appeared to have anticipated such a reaction — especially at Wednesday’s meeting. Originally, U.S. officials said the meeting would focus on Iran and its military aggression in the Middle East. But upon realizing that Trump could find himself isolated on the subject, U.S. officials decided to broaden the agenda to cover the importance of non-proliferation of weapons of mass destruction.

Regardless, the various world leaders at the table Wednesday took advantage of their opportunity to speak to cover a range of issues. Smaller countries were especially unrestrained in going after Trump, as the meeting offered a rare opportunity for them to raise their concerns to Trump with everyone else watching.

The president of Equatorial Guinea, Teodoro Obiang Nguema Mbasogo, spoke in support of multilateral institutions, which have long drawn Trump’s ire. The Equatorial Guinea leader said nations too wedded to “sovereignty” could undermine the welfare of the international community, a likely reference to Trump’s sovereignty-focused speech Tuesday before the entire U.N. body.

And then there was Bolivia, which brought up the U.S. role in Iran’s 1953 coup at the start of fusillade of criticisms that painted an America as too quick to turn to war instead of diplomacy.

“The United States could not care less about human rights or justice,” Bolivian President Evo Morales said, just steps away from the stone-faced U.S. president. 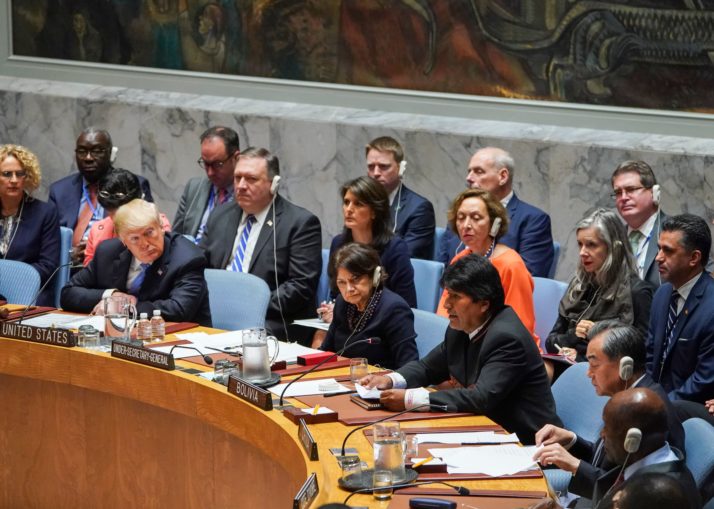 Bolivia brought up the U.S. role in Iran’s 1953 coup at the start of fusillade of criticisms that painted an America as too quick to turn to war instead of diplomacy | Don Emmert/AFP via Getty Images

Bolivia has long been a vocal critic of U.S. foreign policy, and Morales did not hold back on Wednesday.

He raised what he described as past U.S. failures in the Middle East and North Africa — including the chaotic aftermaths of the U.S. invasion of Iraq and its operations in Libya — to warn against what he cast as U.S. designs on Iran.

Morales even castigated the Trump administration’s earlier policy of separating migrant children from their parents along the southern border, and putting the children in “cages.”

The verbal slams were predictable: There is widespread unease at the U.N. with Trump’s foreign policy outlook, and in particular his aggressive stance on Iran. But Wednesday’s spectacle was nonetheless striking, as it involved international leaders confronting the U.S. commander in chief in person with the world watching.

The moment that will likely come to define Trump’s 2018 trip to the U.N. General Assembly occurred only minutes after the president showed up to address the entire U.N. body.

When Trump blasted Germany over an energy pipeline to Russia during his Tuesday speech, cameras caught the German representatives smirking.

After Trump used his opening remarks at Wednesday’s security council meeting to accuse China of meddling in U.S. elections, cameras caught China’s stern-looking representative reacting to the remarks with a slight shrug.

“They do not want me or us to win because I am the first president ever to challenge China on trade,” Trump said. “And we are winning on trade. We are winning at every level. We don’t want them to meddle or interfere in our upcoming election,” the president said.

But the moment that will likely come to define Trump’s 2018 trip to the U.N. General Assembly occurred only minutes after the president showed up to address the entire U.N. body. 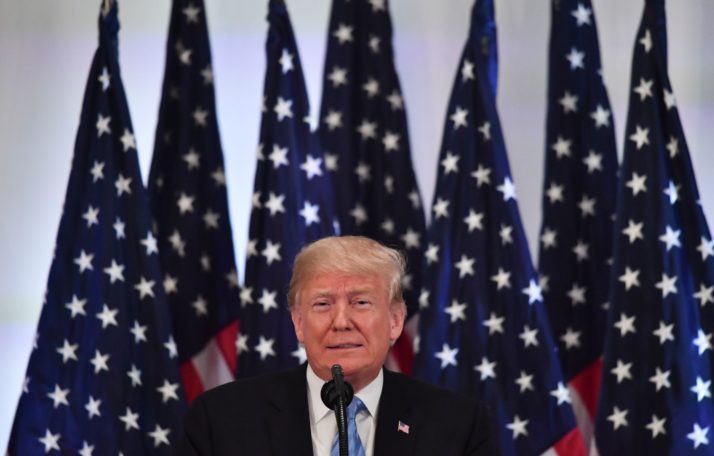 “And we are winning on trade. We are winning at every level” said U.S. President Donald Trump | Nicholas Kamm/AFP via Getty Imagea

“It’s so true,” Trump continued, before acknowledging the simmering chuckles.

“I didn’t expect that reaction, but that’s okay,” he said, smirking and raising his eyebrows, sending the audience into greater fits of laughter.

Read this next: Cuba on the Thames