Pressure is mounting on Belgium’s government to explain why payments of hundreds of millions of euros flowed to unknown recipients from frozen accounts in Brussels that once belonged to Libyan dictator Muammar Gaddafi.

Opposition lawmakers are demanding that the administration of liberal Prime Minister Charles Michel answer questions after a public broadcaster this week linked the payments from the Libyan accounts in Brussels to arms shipments.

The lawmakers are focusing their attention on answers they regard as inadequate from Foreign Minister Didier Reynders over why funds were paid out from accounts that were supposed be frozen under U.N. sanctions. They are also seeking assurances that the money did not end up in the hands of militia in the volatile African nation.

Questions over Belgium’s implementation of the U.N.’s 2011 sanctions against Libya picked up steam in February after a POLITICO investigation into €16 billion of the Libyan dictator’s assets supposedly frozen in Belgium discovered big, regular outflows of stock dividends, bond income and interest payments to unknown beneficiaries with bank accounts in Luxembourg and Bahrain.

The issue returned to the spotlight in September, when a U.N. panel of experts on Libya concluded that Belgium was in violation of international sanctions, and argued that releasing the funds “could lead to the misuse and misappropriation of funds.”

Seizing on the growing political significance of the case, Belgium’s opposition Socialists are trying to gather a majority in parliament to hold a hearing with the U.N. experts.

On Wednesday, Dirk Van der Maelen, a Flemish socialist lawmaker, submitted official questions to Reynders asking him to confirm if “proceeds of the frozen Libyan assets at Euroclear released by the Belgian government have served to finance weapons [for] Libyan militias.”

Next week, lawmakers in the parliament’s financial committee will also convene to discuss how to take the matter forward. The payments are already under investigation by prosecutors in Brussels.

“I think links between the money leaving Belgium and arms deals have been made too quickly” — Georges Gilkinet, Green member of the Belgian parliament

“We have been tabling questions because we want to know more about this story,” Van der Maelen said on Wednesday. “We have discussed that the current Minister of Finance Johan Van Overtveldt, and Minister of Foreign Affairs Didier Reynders, who by the way was finance minister until 2011, did not give enough clarification and gave many excuses in order not to answer questions.”

Reynders was quoted by the Belgian daily La Libre in 2011 arguing that Belgian companies should be paid their dues from contracts made with the Gaddafi regime before sanctions kicked in. “What we have generally done on past occasions is to see what could be unblocked by the Treasury to pay Belgian companies,” he said.

Van der Maelen added that a lack of clarity over who was behind the decision to free large sums of money from accounts in Belgium threatened to overshadow the country’s role as a non-permanent member of the United Nations Security Council from next January.

“We have a situation where the man representing Belgium at the U.N. Security Council has questions to answer on a serious matter,” Van der Maelen said.

On Tuesday, Belgian public broadcaster RTBF quoted an anonymous source close to the security services claiming that the Belgian government was “not neutral” in the financing of Libyan militia. “There has been one or two scandals linked to airplanes seized at the airport in Ostend with arms inside,” the unnamed source said. However, the report did not offer proof of a direct link between the interest payments and the arms shipments.

Georges Gilkinet, a Green party member of the Belgian parliament’s finance and budget oversight committee, said on Wednesday that he would be “very careful” before jumping to conclusions that Belgium had played a role in arms’ deals or financing militia. 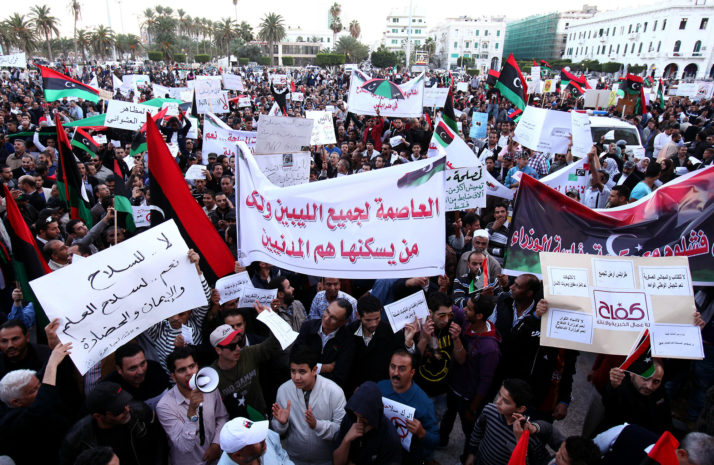 “I think links between the money leaving Belgium and arms deals have been made too quickly,” he said, adding that he would soon submit questions to the ministry of justice for answers on the allegations of arms deals for groups in Libya.

In a parliamentary session in September, Van Overtveldt was not able to identify the recipients of the money but told lawmakers that the interest payments were made in accordance with rules that should prevent money laundering and terrorist financing.

From 2011, U.N. sanctions targeted assets of the Gaddafi regime, including about $67 billion of the Libyan Investment Authority’s assets, primarily invested with banks and fund managers across Europe and North America. An earlier package of measures had introduced an arms embargo and travel bans against prominent members of the regime.

The Belgian finance ministry justified the interest payments from the Belgian accounts by saying they were in accordance with an interpretation of the sanctions’ rules by RELEX, an expert group at the Council of the EU composed of diplomats from member countries. That interpretation was agreed upon on October 20, 2011, the same day Gaddafi was killed near his home town of Sirte.

“In this matter Belgium has acted in coordination with its European counterparts in the application of [EU and international sanctions on Libya] and in accordance with guidance shared and approved by said counterparts within the Relex group meetings,” a spokesperson for the Belgian finance minister wrote in an email. “As has been highlighted by the UN panel of experts on Libya Security Council Resolution 1973 (2011) there is a need to clarify the interpretation.”

“Nobody is preoccupied with the question of where the funds have gone and who benefitted from them” — Robert Wtterwulghe, law professor at UCLouvain

Belgium has also sent a formal request to the U.N.’s sanctions committee to make a legal clarification of the country’s decision to free the funds.

On Wednesday, Reynders denied having anything to do with the decision to release the funds. “It’s the responsibility of the finance ministry and I am no longer there since December 6, 2011.  I have taken no decision in this area,” he said during a trip to Japan.

Asked about the media report on the payments and arms shipments to Libya, the foreign ministry said it had no comment beyond Reynders’ remarks in Tokyo.

A spokesperson for the Council of the EU said it was not for the Council “to express a view” on how a country in the EU interprets the EU’s sanctions regime against Libya.

Legal experts watching the unfolding situation in Belgium said not enough attention is being paid to where the funds ended up.

“Nobody is preoccupied with the question of where the funds have gone and who benefitted from them,” said Robert Wtterwulghe, a law professor at UCLouvain university. “What is surprising is that nobody wanted to see what was going on and everyone is shutting their eyes at a political level … This is an extremely serious problem as it could uncover a real state scandal.”

Read this next: Madrid takes Brexit hit over Gibraltar