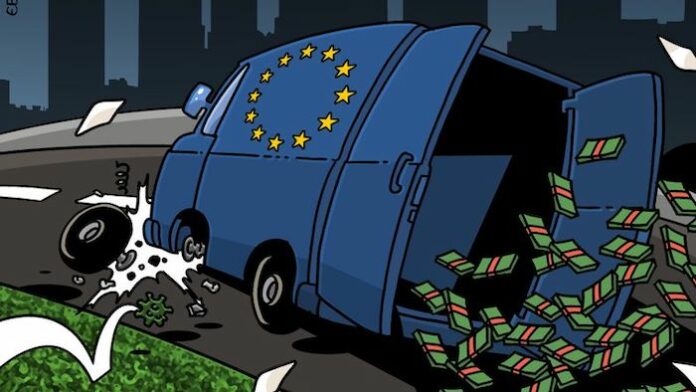 If Europe wants to avoid the mistakes it made after the 2008 financial and the later eurozone crisis, it needs to mobilise its institutions, governments, economic and social actors as well as civil society. Guillaume Klossa suggests a possible path to a sustainable recovery that involves the EU budget.

In the current crisis, the European Union’s loneliness is immense. But the EU should not be paralysed by nostalgia for the world of yesterday. In addition to public health and financial solidarity, the bloc must now consider the concrete form of an ambitious strategic and budgetary solidarity. This is what is at stake at the coming European Councils. The US-chaired G7 is not present even though it was at the heart of the coordinated response to the previous major crises. Worse still, no American leader has asked for it to be activated, which portendsa lasting American withdrawal. As for China, its sole objective seems to be to take advantage of the pandemic to advance its political and economic model and entrench its normative hegemony.

In such a context, we cannot afford to repeat the mistakes made during the 2008 crisis. Then, the only objective was the recovery of our economies. This approach did nothing for our capacity for innovation and only barely helped our competitiveness. Budgetary coordination quickly showed its limits, and only slowed down the EU’s fragmentation, without reversing it.

Since then the European Union has been playing for its survival as an alternative model to those offered by the American and Chinese giants. But Europe’s cooperative DNA makes it a potential counterweight to the inward-looking attitude so prevalent these days. The EU must show unambiguously that member countries are stronger and more resilient together than apart, and that the internal market and economic integration yield more than they cost.

Europe is at a crossroads: it has the choice between a retreat into sovereignism, which would implode both the eurozone and the EU itself, and the bold leap forward of a Union at last endowed with the means for an ambitious and sustainable economic, social, environmental and cultural project.

After a delay getting started, the European Union has in recent weeks successfully organised its public-health cooperation and financial solidarity. It must now take a quantum leap by adopting a bold recovery strategy that goes beyond the mere aggregation of national plans and the means to implement them.

We must reconcile the short, medium and long term, achieve economic recovery and reopen our internal borders, all while accelerating the transformation of our societies in the fields of social policy, the information revolution and sustainable development. The Covid-19 crisis has shown that citizens are ready to make deep changes to their dietary, professional, cultural and health practices, thus creating the conditions for a more rapid transformation of European society. This recovery plan must be co-constructed by the Union and its states, but also involving our civil society, and it must be organised around a shared agenda and the priorities of European citizens.


As a first step, the European Council of 23 April must set the objectives: solidarity, plus shared vision and method.

Secondly, the European Commission, after consulting civil-society partners, states and citizens, using transnational platforms such as WeEuropeans.eu, must propose before the summer a series of major projects of European interest that meet the collective aspirations of our citizens. This “European Marshall Plan”, as announced by President von der Leyen last week, must come within the framework of the European budget for the next seven years, and it must be ambitious to prove to citizens that the EU is up to the challenge of the crisis. The Union’s budget, in the order of € 150 billion a year, could be increased and combined with bond-backed financing for € 350 billion a year, which would correspond to an additional € 1,500 billion in investment for major projects. Deployment of broadband networks and digitisation of the economy to allow widespread teleworking (€ 500 billion); renewable energies (€ 250 billion); electrification of road networks and construction of new high-speed train lines (€ 400 billion); projects in sustainable agriculture, nature and tourism (€ 100 billion); creation of a permanent platform for transnational and multilingual participatory democracy; stepping up R&D in public-health, etc. There is no shortage of relevant projects.

In the third stage, in the autumn, the Union will have to confirm this ambitious budget based on solidarity. Germany, which will preside the Council of the European Union, will have a historic responsibility: it will have to surmount stale ideological quarrels and pass over the psychodrama of the “coronabonds”. Europe is better than a dispute over instruments; let us debate the score instead. The challenge will be to equip ourselves with a Community budget for transformation based on needs rather than on a predetermined percentage of wealth (1 percent of GDP, current EU budget). This budget should be supplemented by innovative resources (a tax on plastics, carbon and so on) but also by an increase in the contribution of the member states, which could be financed by European bonds guaranteed by the Union. Such a mutualisation of debt at European level would not carry the stigma of past mismanagement by states, but would be a wager on the future. The mistrust between South and North and the distrust between West and East have no more reason to fight against the virus and its impact.

To paraphrase Stefan Zweig, let us not wait for “hatred from country to country, from people to people, from table to table” to assail us, for it to separate “people from people and nations from nations”. Let us act as Europeans, now, before it is too late.

‘Europe will be democratic or not at all’ – VoxEurop (English)