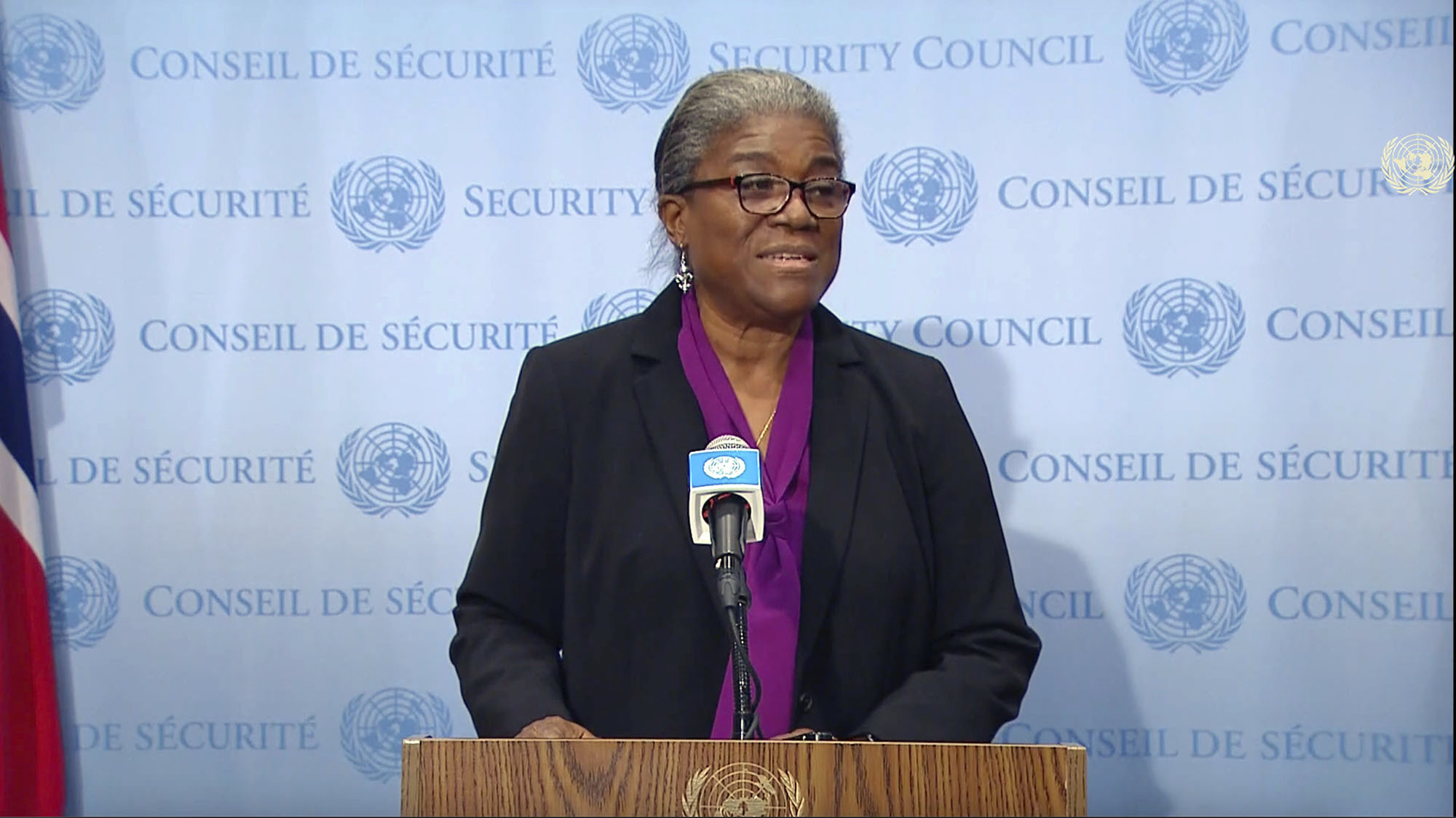 Taking off his face mask to speak, the Ukrainian ambassador to the U.N., Sergiy Kyslytsya, called Russia a “virus” for instigating war and chaos for eight years: “The United Nations is sick. That’s a matter of fact. It’s been hit by the virus spread by Kremlin.” And with a defiant tone, Kyslytsya declared, “We are not afraid of anything or anyone. We owe nothing to anyone. And we will not give away anything to anyone.”

Some U.N. ambassadors used the opportunity to underscore the devastation that is likely to befall Ukraine. The Kremlin’s decision “unleashes the forces of war, death and destruction on the people of Ukraine. The humanitarian impact will be terrible,” said Britain’s Barbara Woodward. “We know that women and children will suffer most.”

The U.N. Security Council meeting was more symbolism than substance, providing the U.S. and its partners a prime-time opportunity to back Ukraine and denounce Russia on the world stage. No resolution on sanctions or other punishment could pass since Russia holds one of the five veto seats on the global body. Multiple ambassadors decried the U.N.’s inability to act — but the meeting showed that the Kremlin’s decision made Russia an isolated nation in the international community.

Russian Ambassador to the U.N. Vasily Nebenzya pushed back on the tongue-lashing, saying the U.S. and allies were “cramming weapons” into Ukraine. He also falsely accused Kyiv of not seriously seeking a diplomatic solution to the conflict in eastern Ukraine that Putin started.

The real punishment for Russia is expected Tuesday: “We plan to announce new sanctions on Russia tomorrow in response to Moscow’s decisions and actions today. We are coordinating with Allies and partners on that announcement,” a White House spokesperson told POLITICO Monday night. The U.K. similarly said it would outline and impose sanctions the same day.

The extraordinary session came after Kyiv demanded a Security Council meeting following Putin’s decision to recognize the so-called Donetsk and Luhansk People’s Republics as independent nations. Condemnations quickly flowed in from Washington and European capitals, followed by American sanctions on anyone involved economically, politically or militarily with the separatist regions and threats of future punishment targeted at Moscow from both sides of the Atlantic.

Footage on social media, picked up by news outlets, appeared to show Russian troops already in Donetsk, a city of nearly 1 million people and home to the leaders of the so-called Donetsk People’s Republic.

But the Biden administration hasn’t yet declared Russia’s movements as an “invasion,” holstering for now that word — perhaps for a large sanctions package developed with allies.

That decision angered Republicans and Democrats alike. They assert Russia’s formal recognition of the Russia-backed separatists and latest troop movements inside Ukraine equate to an invasion that should prompt the harshest economic penalties.

“To be clear, if any additional Russian troops or proxy forces cross into Donbas, the Biden administration and our European allies must not hesitate in imposing crushing sanctions. There must be tangible, far-reaching and substantial costs for Russia in response to this unjustified act,” said Sen. Bob Menendez (D-N.J.), chair of the Senate Foreign Relations Committee.

As Russian troops moved deeper into eastern Ukraine, the State Department announced that all U.S. personnel would stay overnight in Poland for their safety, with the chance of a return to the temporary mission in Lviv as soon as tomorrow.

“The fact that we are taking prudent precautions for the sake of the safety of U.S. government personnel and U.S. citizens, as we do regularly worldwide, in no way undermines our support for, or our commitment to, Ukraine. Our commitment to Ukraine transcends any one location,” Secretary of State Antony Blinken said in a statement.