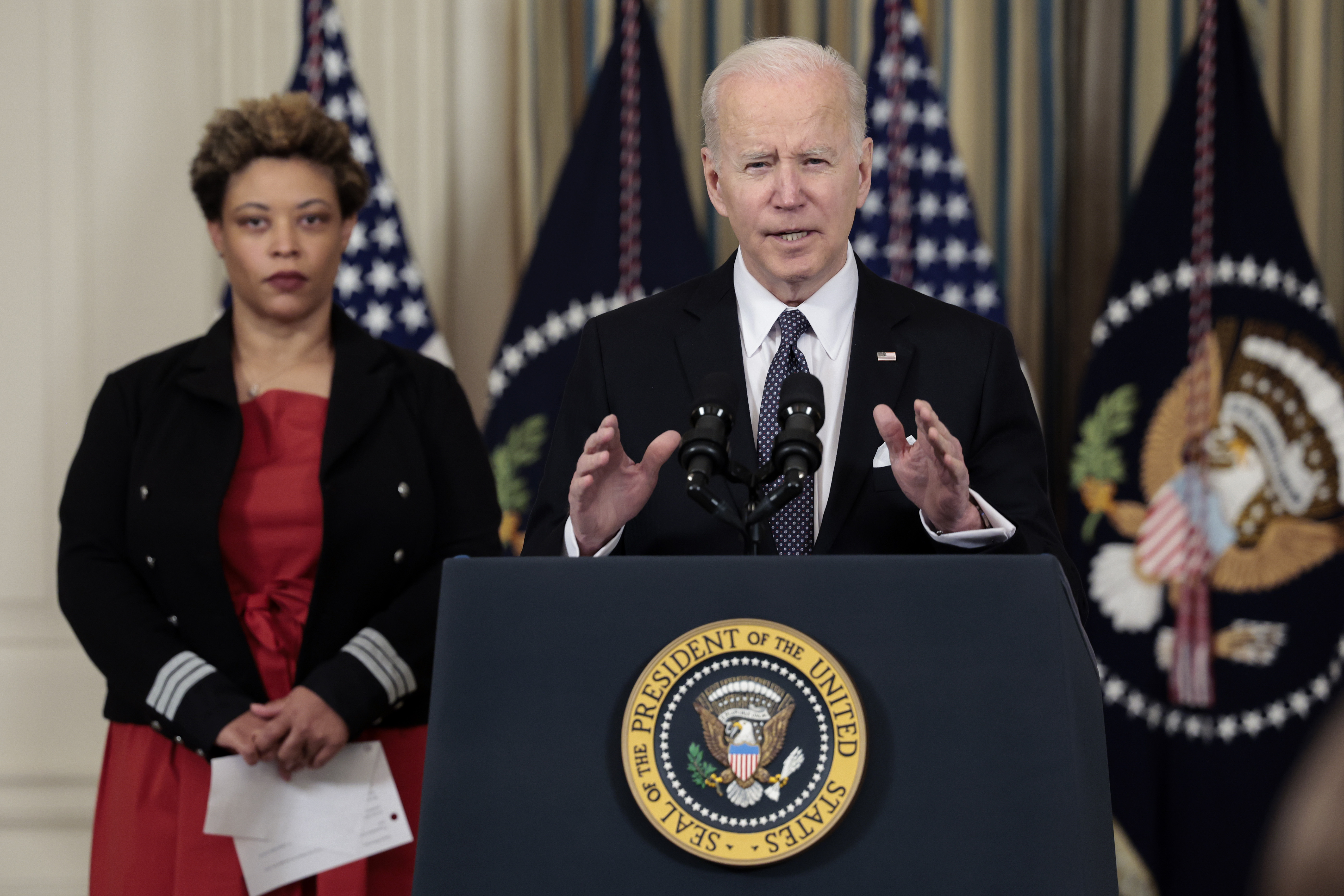 But to date, the Biden administration has painstakingly made the case that that is as far as they’ll go. On March 22, Jake Sullivan denied that Americans were “currently” training Ukrainians. “We do, of course, have U.S. troops defending NATO territory,” he continued.

That’s not what Biden said Monday. After delivering remarks about the White House’s new budget request, Biden answered a reporter’s question about comments he made when meeting the 82nd Airborne in Poland, in which he implied American forces would be going to Ukraine. Biden denied that’s what he meant, adding: “We’re talking about helping train the Ukrainian troops that are in Poland.”

Pressed again, Biden said, “I was referring to being with, and talking with, the Ukrainian troops that are in Poland.”

It’s possible Biden meant to say “American” when he said “Ukrainian” on the second instance, or he exaggerated the extent to which American soldiers advise the Ukrainian forces on how to use the security assistance the administration has provided.

A recent ad-lib by the president in Poland regarding Vladimir Putin — “For God’s sake, this man cannot remain in power” — set off a flurry of speculation and subsequent clean-up by the White House that Biden was not calling for regime change.

A Pentagon spokesperson did not respond immediately to requests for comment, nor did representatives for the Ukrainian government. A Polish official wouldn’t confirm any interactions between Americans and Ukrainian troops.

“There are Ukrainian soldiers in Poland interacting on a regular basis with U.S. troops, and that’s what the President was referring to,” said a White House official.

Multiple congressional staffers on key national security committees said they were unaware of such a training mission. One said that the training would be classified and therefore couldn’t confirm it was happening.

Both U.S. and British officials said privately in the opening days of the war that Ukrainian troops could eventually be trained outside of Ukraine if the conflict dragged on for an extended period and it became a grinding insurgency.

Poland has already become the primary hub for countries to send their Ukraine-bound weapons shipments. The U.K. and the American European Command have been coordinating flights into Polish military airfields from multiple countries around Europe, from which Ukrainian troops load up the anti-air and armor missiles, military rations, ammunition and body armor onto trucks and drive them back across the border to sites within Ukraine.

Specifically, the Ukrainians might need training on some weapons like Stinger ground-to-air missiles, which they didn’t have before the invasion but have been sent by the U.S., Germans and Latvians, among other countries.

The U.S. and U.K.-led training effort in Ukraine from 2015 to 2022 took place inside Ukraine, but Ukrainian troops regularly attended NATO exercises throughout the continent all the way up to Russia’s February invasion. One former U.S. military officer who made multiple trips to Ukraine told POLITICO that the Ukrainians’ ability to organize and fight improved rapidly and dramatically after they began working with NATO forces.

“Their infantry, artillery, innovative skill and being able to use drones and synchronize them was pretty impressive,” said the former officer, who requested anonymity to speak about the training mission. “Their special forces and airborne forces were excellent. There was a part of me, that when I first got there, that made me think they were more Soviet than even the Russian army. But over time, you could see the change.”

Asked directly on Monday if the U.S. was training Ukrainian troops on these new weapons, a senior defense official told reporters the U.S. is focused on providing weapons that the Ukrainians already know how to use, “so nothing has changed from our perspective on those kinds of security assistance details.”

Those weapons continue to flow into Ukraine, the official said. “We continue to deliver every single day, not only from the United States but from other countries that we’re helping coordinate it [with], and that includes additional shipments from the $800 million that the President announced a few days ago.”