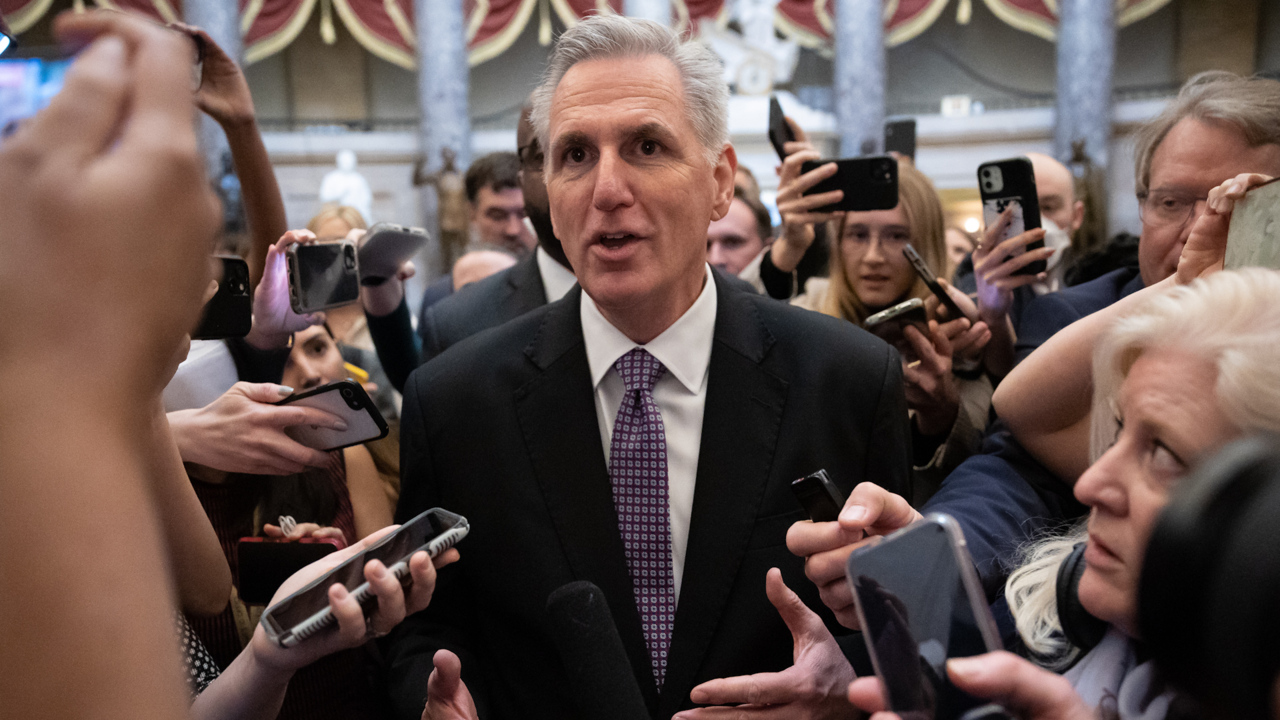 Increasingly desperate GOP calls it a night without picking a speaker

“I’ll be optimistic when I see white smoke coming out of the chimney,” said Rep. Steve Womack (R-Ark.), a McCarthy ally. While he said progress could “hopefully” be made overnight, he added, “Hope is never a method.”

Still, after temperatures spiked during multiple closed-door GOP meetings this week — and six rounds of failed ballots drew comparisons to “Groundhog Day” — multiple Republicans insisted they were feeling more optimistic as they left the Capitol on Wednesday night. But many members cautioned that it was impossible to know whether there were any compromises that would prompt McCarthy’s most intractable opposition to change position.

They may soon find out. McCarthy’s team on Wednesday night laid out an offer that would give in to nearly every demand expressed by his defectors. But it was still unclear if it would be enough to win enough of those lawmakers over to his side.

True to form, one of McCarthy’s chief antagonists, Rep. Chip Roy (R-Texas), said he was still digesting his most recent conversations with leadership and withheld from any new commitments: “There’s a lot of details here that matter … I gotta see what we’re even talking about.”

The House’s vote to adjourn on Wednesday night — the GOP’s first successful vote of their majority — was, to some, a sign that some members were willing to budge. One senior Republican, Rep. Hal Rogers (R-Ky.), offered this assessment: “Hard to say but that’s probably good news.”

That dose of optimism comes at a crucial time for Republicans, as signs of desperation grew throughout the day Wednesday among a paralyzed — and increasingly furious — GOP conference.

One of them, Rep. Jeff Van Drew (R-N.J.), compared the process to Dante’s nine circles of hell: “I’m in at least one of them right now.”

Without any movement, the New Jersey Republican suggested party leaders should “get everybody back in the caucus room and start beating the daylights out of each other until we get somewhere.”

There’s no end in sight to the GOP stalemate, and lawmakers’ determination to resolve the humiliating standoff is growing increasingly frantic. They’ve started floating a range of longshot ideas to their colleagues, and even to Democrats.

Another tactic under consideration is arguably more risky for Republicans: Some McCarthy allies have privately proposed electing a House leader through a plurality of votes instead of a majority. That path, which one Republican described as the “nuclear option,” is intended to force conservatives to back the GOP leader or risk handing the gavel to incoming Democratic leader Rep. Hakeem Jeffries (D-N.Y.).

Few lawmakers on either side of the aisle believe those strategies are seriously on the table. Still, it’s a sign of Republicans’ increasing fatigue and frustration as they see no clear path to electing a speaker after two straight days of votes and months of bargaining.

“This is like O.J. and the white Bronco. Everybody’s watching … waiting for something to happen at 40 miles per hour,” Womack said, referring to the O.J. Simpson murder case.

One GOP aide mused: “Is this a less bloody version of World War I at this point?”

Even some Democrats are so alarmed about the situation that they’ve contacted Republicans — through floor conversations, phone calls and even private meetings — to discuss potential ways out of the predicament. But many Democrats caution that these talks, about power-sharing or coming to some other cooperative agreement, are not serious discussions about helping the GOP out of their own mess.

While that could still happen, they insist there’s no widespread appetite to alleviate the GOP’s suffering, at least not yet.

“We were talking about ideas,” said Rep. Henry Cuellar (D-Texas), who, along with Rep. Jim Costa (D-Calif.), crossed to the Republican side of the floor Wednesday to speak with Rep. Paul Gosar (R-Ariz.) as Democrats wondered how this all might end.

As the votes ticked up on Wednesday, House Republicans remained almost entirely immobile on the second day of a public reckoning over the future of their conference. McCarthy’s gang of dissenters — labeled the “Taliban 19″ by some of their own colleagues — are now rolling tape on an uglier and more drawn-out sequel to McCarthy’s failed 2015 bid for the top gavel. And this time, he likely won’t have another chance for redemption.

On each vote, the California Republican repeatedly failed to win over the 20 conservatives who voted against him on the floor Tuesday. Some Republicans predicted his number of defectors would grow but, in fact, the number of anti-McCarthy votes remained mostly constant. One member, Rep. Victoria Spartz (R-Ind.), who is weighing a Senate bid, voted present in every ballot Wednesday after previously backing McCarthy.

Behind the scenes, several key McCarthy allies have attempted to back-channel with his defectors. One GOP lawmaker who attended those meetings said Wednesday night’s talks were the first time that members gathered in a room did not actually raise their voices at each other — though they acknowledged things still got heated.

GOP lawmakers across the party agree it’s entirely unknown what happens next. The extra time, however, also created the opportunity for members to cluster and chat about who could possibly take McCarthy’s place. Some say they can’t fully explore that question while McCarthy is still in the race, as his allies stress that dozens, perhaps as many as 80, “Only Kevin” members are refusing to hear other possibilities.

For now, GOP leaders aren’t allowing any daylight in their top ranks.

Rep. Steve Scalise (R-La.), the No. 2 House Republican who’s been floated as a potential plan B candidate, agreed there had been some progress but declined to specify what was being discussed.

“There’s just been a lot of conversations about the issues that the been at the heart of this from the beginning, and that’s how we can make Congress work better to address the needs of families who are struggling.”

And there’s another factor at play outside the Capitol halls: Whether Trump uses his power — which is not as strong as it once was — to pressure some of the “no” votes to flip. On his social media platform Wednesday morning, Trump reiterated his support, despite growing rumblings that he was bowing away from his endorsement of the GOP leader.

“Some really good conversations took place last night, and it’s now time for all of our GREAT Republican House Members to VOTE FOR KEVIN, CLOSE THE DEAL, TAKE THE VICTORY,” he wrote.

Nicholas Wu contributed to this report.