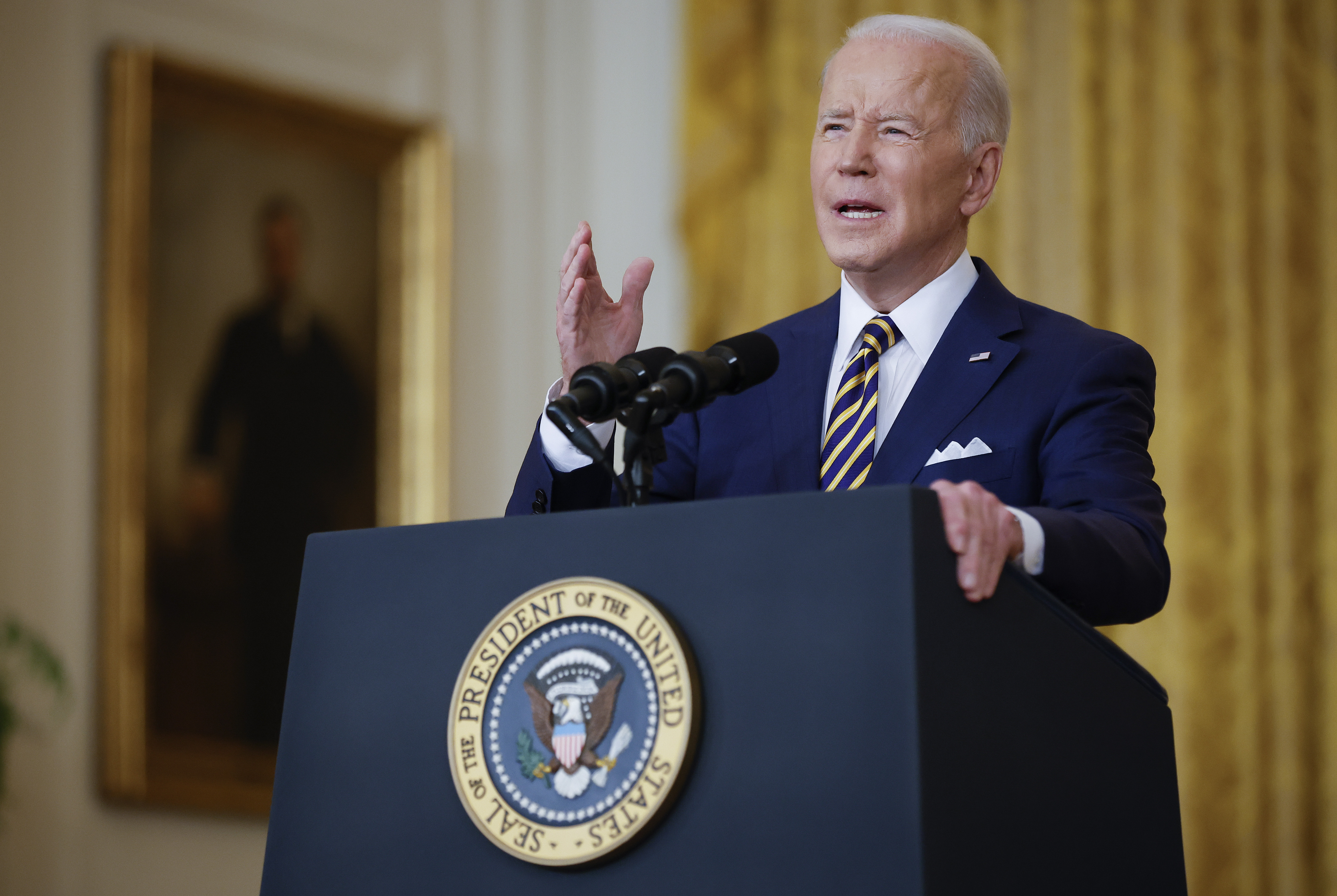 Biden says he believes Putin has decided to invade Ukraine

The president’s speech followed his call with trans-Atlantic leaders on Friday, the latest in a U.S. effort to rally European and other allies to jointly pressure the Russian president not to again invade Ukraine — and to offer an off-ramp to war.

“They pledged to continue pursuing diplomacy to de-escalate tensions while ensuring readiness to impose swift, coordinated economic costs on Russia should it choose further conflict. The leaders also discussed efforts to ensure the defense and security of NATO’s eastern flank,” a White House readout of the call said.

Biden also spoke to Vice President Kamala Harris and the group of bipartisan members of Congress representing the U.S. at the Munich Security Conference. He said the message on both calls was “one of unity, determination, and resolve.”

Adding to the dim outlook on Friday, new provocations and shelling in the breakaway regions of Donetsk and Luhansk continue to worry Western governments that Putin will use the violence as a pretext for an invasion. During his speech, Biden called out Russia for pushing disinformation.

“Well, look, there’s simply no evidence of these assertions and it defies basic logic to believe the Ukrainians would choose this moment with well over 150,000 troops arrayed on its borders to escalate a yearlong conflict,” Biden said. “All these are consistent with the playbook the Russians have used before, to set up a false justification to act against Ukraine.”

A senior U.S. official on Friday publicly put the estimated number of Russian forces lining up for a potential attack at between 169,000 to 190,000. That figure appears to include separatist fighters Russia has backed in Ukraine’s east since it last invaded in 2014, who could be important players in a new invasion.

“This is the most significant military mobilization in Europe since the Second World War,” said the official, Mike Carpenter, the U.S. ambassador to the Organization for Security and Cooperation in Europe. He went on to admonish the Kremlin for what he said was a disinformation campaign designed to make it seem as if Ukraine is provoking Russia to strike.

Russia has denied plans to invade, but along with dramatically increasing the number of troops it keeps along the border with Ukraine, it also has begun amplifying alleged grievances with Kyiv. Putin has even accused Ukraine of committing “genocide” in its conflict with Russian-backed separatists in its east — an allegation Western officials say has zero basis.

Putin made similar claims on Friday in Moscow, where Kremlin-allied Belarusian dictator Alexander Lukashenko was visiting. Russian forces have amassed in Belarusian territory in recent weeks for what the two autocrats claim are exercises, due to end on Feb. 20. U.S. officials say the build-up appears designed to give Moscow another route into Ukraine, noting the Belurisian border’s proximity to Ukraine’s capital, Kyiv.

“These military exercises were purely defensive and are not a threat to any other country. They were planned and all the objectives of these drills have been achieved,” Putin said. “We see also in Ukraine systematic violation of human rights and discrimination against the Russian-speaking population.”

Lukashenko sounded more militant, even as he, too, referred to the Russian troop presence on his soil as part of exercises.

Russia also announced that starting Saturday, it would carry out exercises involving its strategic nuclear forces, another worrying signal for the West.

Ukraine has reported multiple cyberattacks in recent days and both sides have accused the other of shelling in Ukraine’s east. Biden on Thursday said he expects Putin could launch an invasion within “several days.” And in what Western leaders viewed as a propaganda move by Moscow, a separatist leader in Ukraine’s east said his forces will begin evacuating civilians to Russia, claiming Kyiv was planning an assault on the region.

Putin has long been irked by Ukraine’s efforts to get closer to continental Europe and its desire to join NATO. The autocrat views Ukraine as within Russia’s sphere of influence, if not outright a part of Russia. He has repeatedly said that NATO and its expansion is a threat to his country’s security.

As the conflict has heated up, Putin has demanded that Ukraine be barred from joining NATO and that NATO reduce its troop levels and presence close to Russia. But U.S. and fellow NATO officials have told Putin he can’t dictate what other countries or the military alliance do.

The Biden administration has exerted an exceptional amount of energy rallying allied and partner countries to stand up to Russia and used an array of forums, including the United Nations, to urge Moscow to back off.

The U.S. and an array of European leaders have warned Putin they will impose severe economic sanctions on Russia should he attack Ukraine. Biden has also sent thousands of additional troops to NATO countries in an effort to deter any potential conflict in Ukraine from spilling over into member states, which the U.S. would be obligated to protect under the treaty’s Article 5 mutual-defense provisions.

The United States also has gone to unusual lengths to publicize intelligence and other data it has obtained about Russia’s plans — part of an information war designed to derail Russian efforts to create a false pretext for an invasion.

Harris is also playing a growing role. She is attending the Munich Security Conference this weekend, a major gathering of national security officials, where she is due to give a keynote speech Saturday.

Secretary of State Antony Blinken, who also is attending the conference, is due to meet next week with Russian Foreign Secretary Sergey Lavrov.

Cristina Gallardo contributed to this report.