At the latest Romanian presidential elections, almost one million Romanians voted from abroad, largely by casting their ballots in more than 800 polling stations open from Friday through Sunday. A visual exploration of the data.

At the Romanian presidential elections in 2019, Romanian citizens living abroad could vote for three days for each of the two turns of elections in more than 800 polling stations around the world. This is on top of the possibility to vote by correspondence. Both longer opening times for polling stations and voting by correspondence have been introduced in 2019 after waiting times of many hours  – effectively corresponding to voter suppression – marred recent elections.

Romanians living abroad took advantage of the possibility to vote without standing for hours in a queue: an unprecedented 940.000 people voted at the second round of the presidential election on 24 November 2019, corresponding to more than 10 per cent of the total votes cast.

This is more than double the number who took part to the previous presidential elections in 2014 (close to 400.000 voters) and multiple times the less than 150.000 who took part to the 2009 presidential vote. Given that the diaspora overwhelmingly supports one of the sides (an astonishing 94 per cent of votes cast abroad were in favour of incumbent Klaus Iohannis) this is clearly of significance, even if due to the current electoral legislation this impacts mostly presidential elections and referenda, while it has noticeably less impact on parliamentary elections where the diaspora only determines four MPs and two senators .

How many voted, and who are they?

Italy tops the list of countries by number of Romanian voters. However, more than 100.000 people cast their ballot also in the UK, Germany and Spain.

The age distribution of voters is quite telling of Romania’s migration patterns, with Romanian citizens voting in the UK and Germany being much younger than those who vote in Italy and Spain. 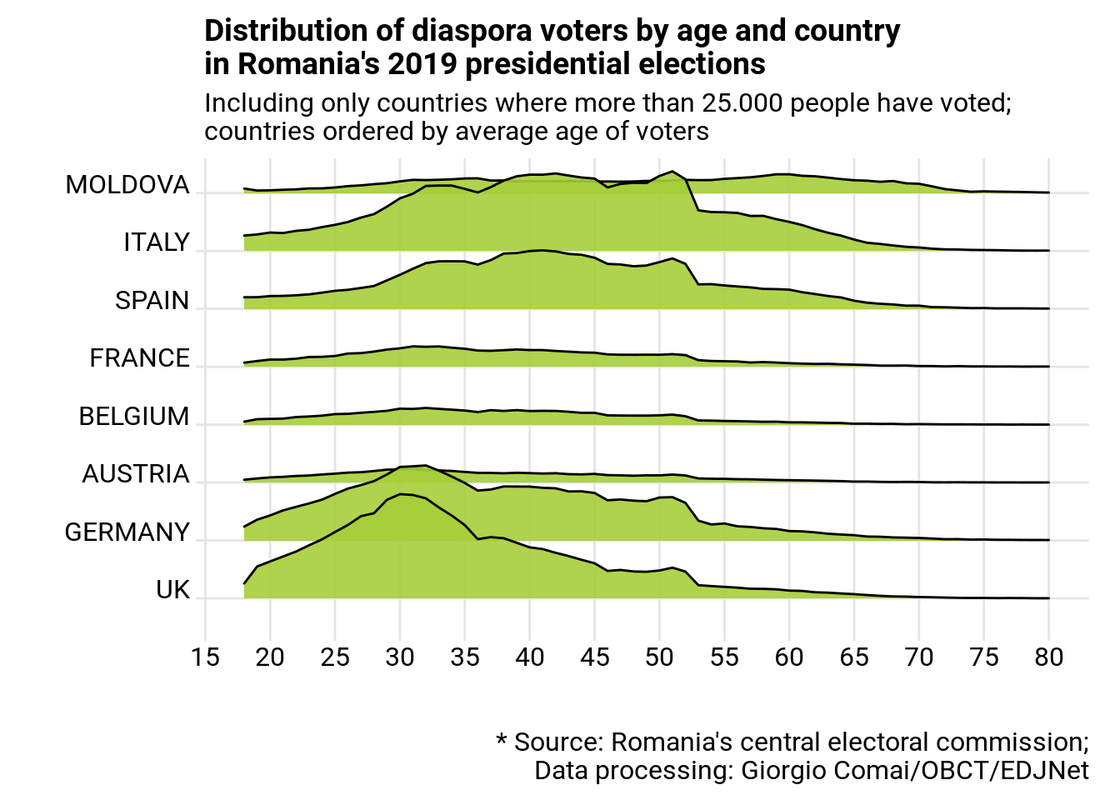 Besides these broad trends, careful readers will have noticed anomalies in the above age distributions (in particular, the sharp drop in the number of voters older than 52). They are, however, not related to migration patterns and instead mostly reflect the unusually sudden demographic changes brought about by the demographic policies promoted by the Ceaușescu regime .

It is worth noticing that Italy is the only country where there are have been more female than male voters. 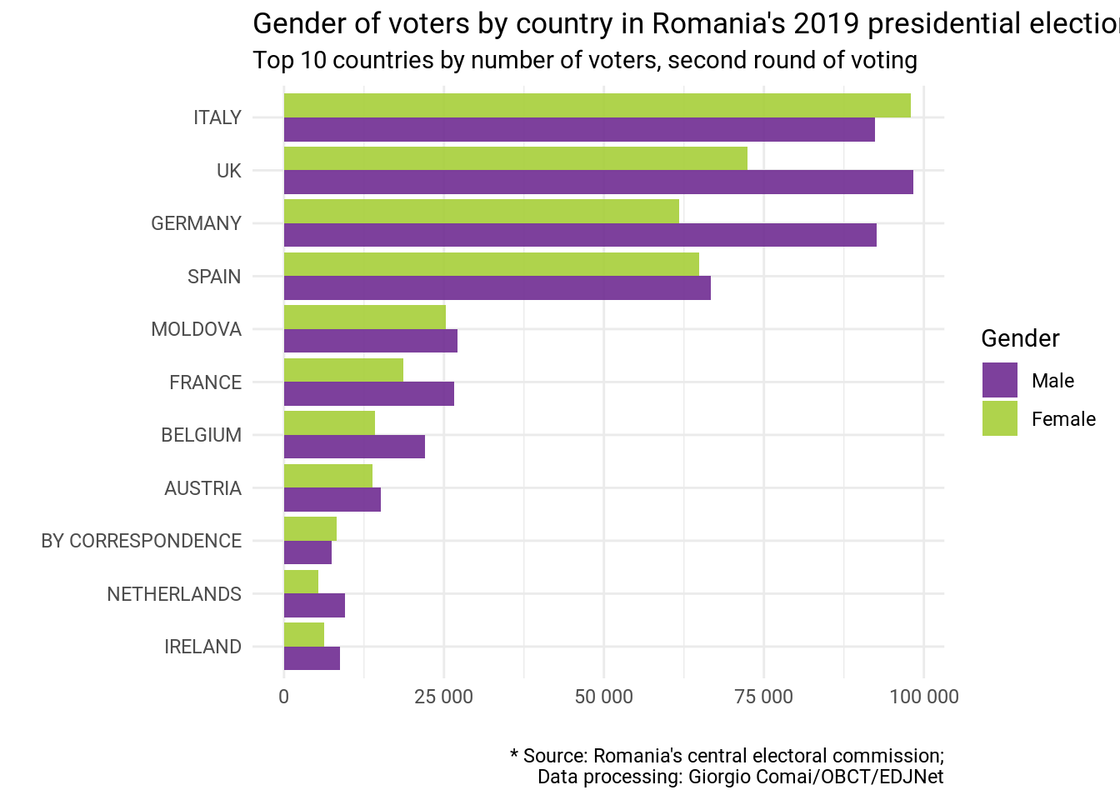 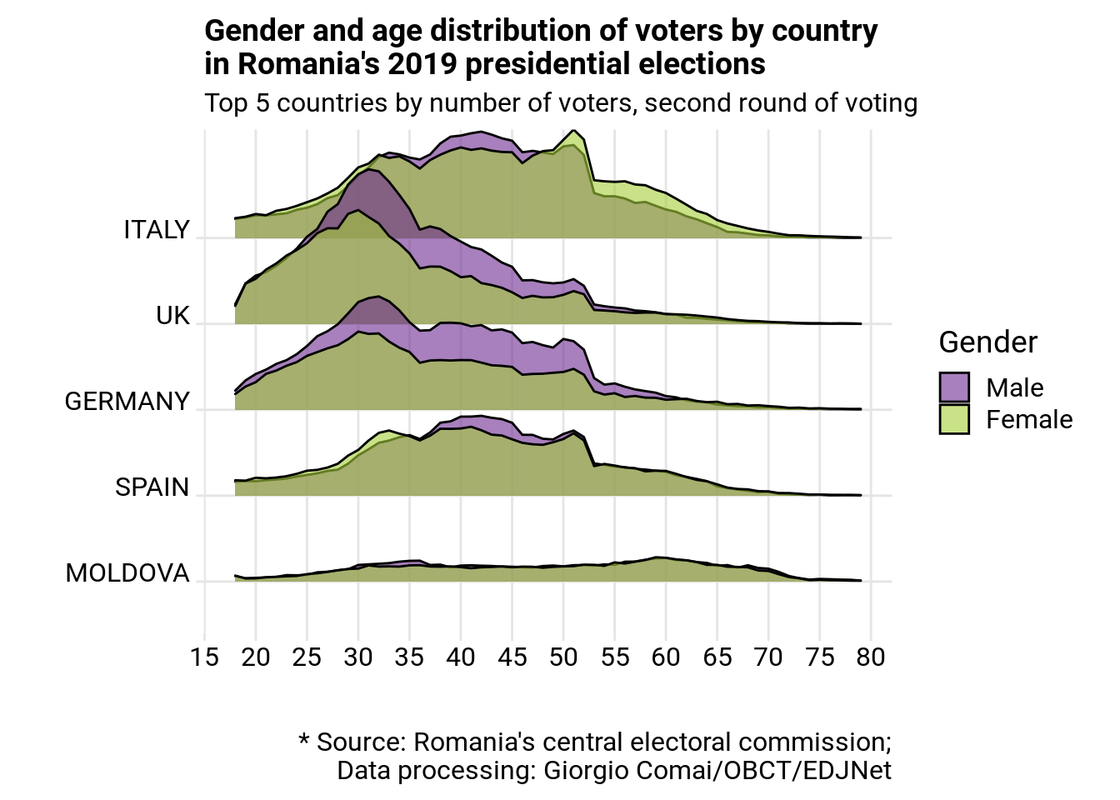 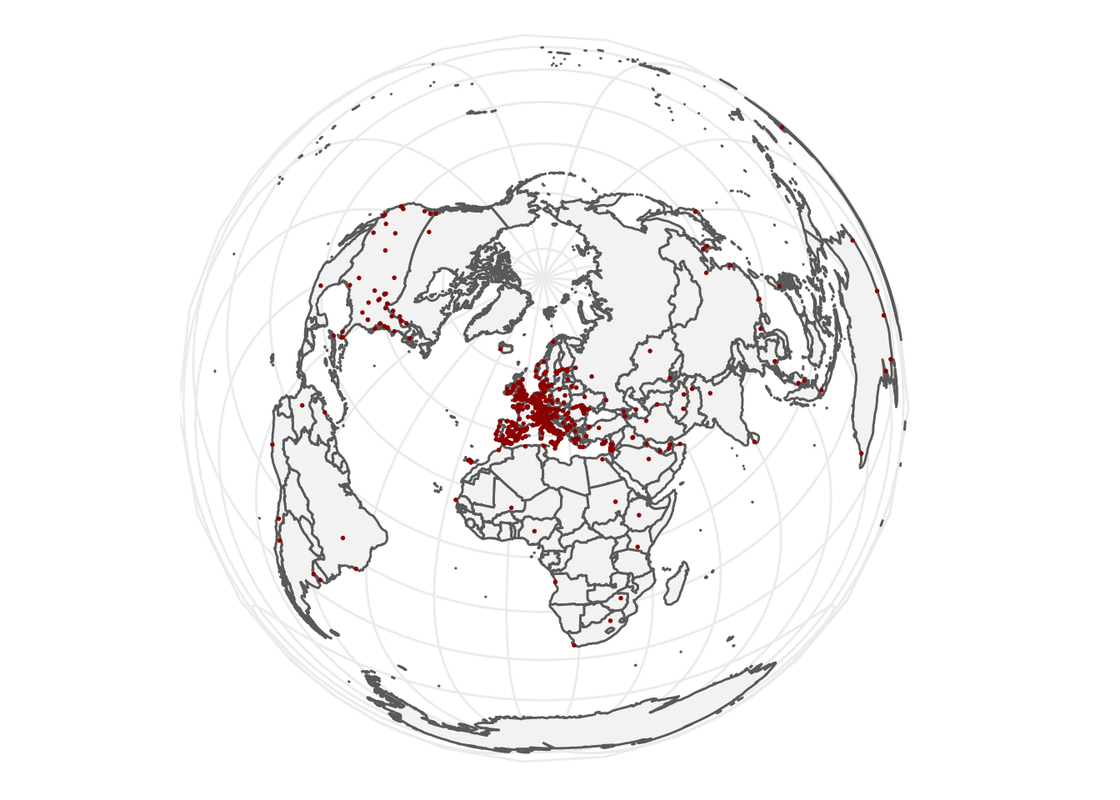 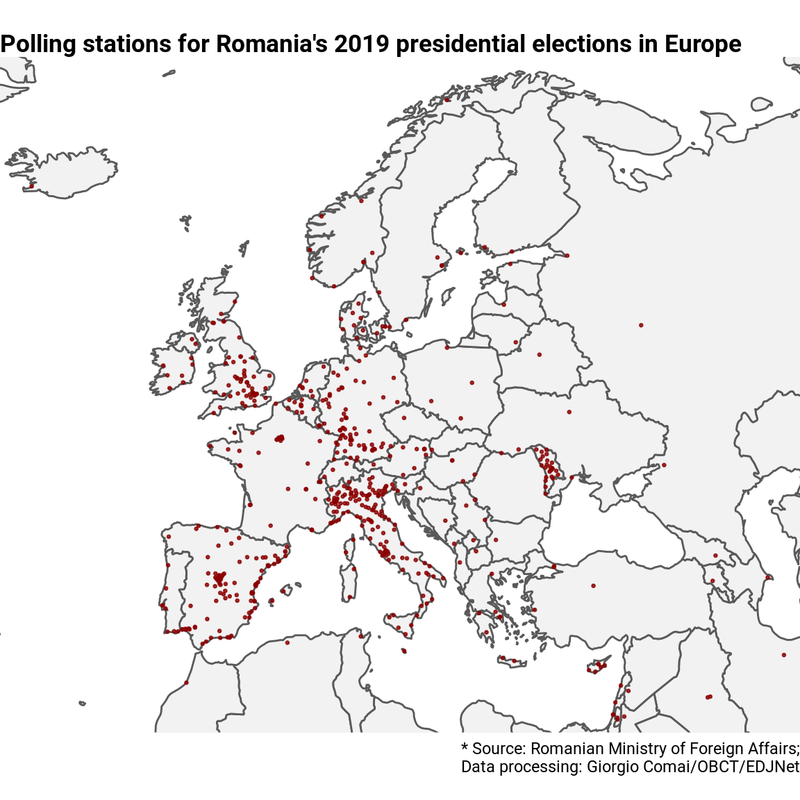 There is an exceptional density of polling stations not only in the Republic of Moldova, where many local residents have obtained Romanian citizenship, but also in the most densely populated parts of England, in Belgium, in some parts of Spain, and across Italy, which has long been a major destination for Romanians leaving their native

Locating Romanian polling stations on a population density map of Italy, it soon appears that polling stations have not been opened only in major cities, but also in relatively sparsely populated areas. 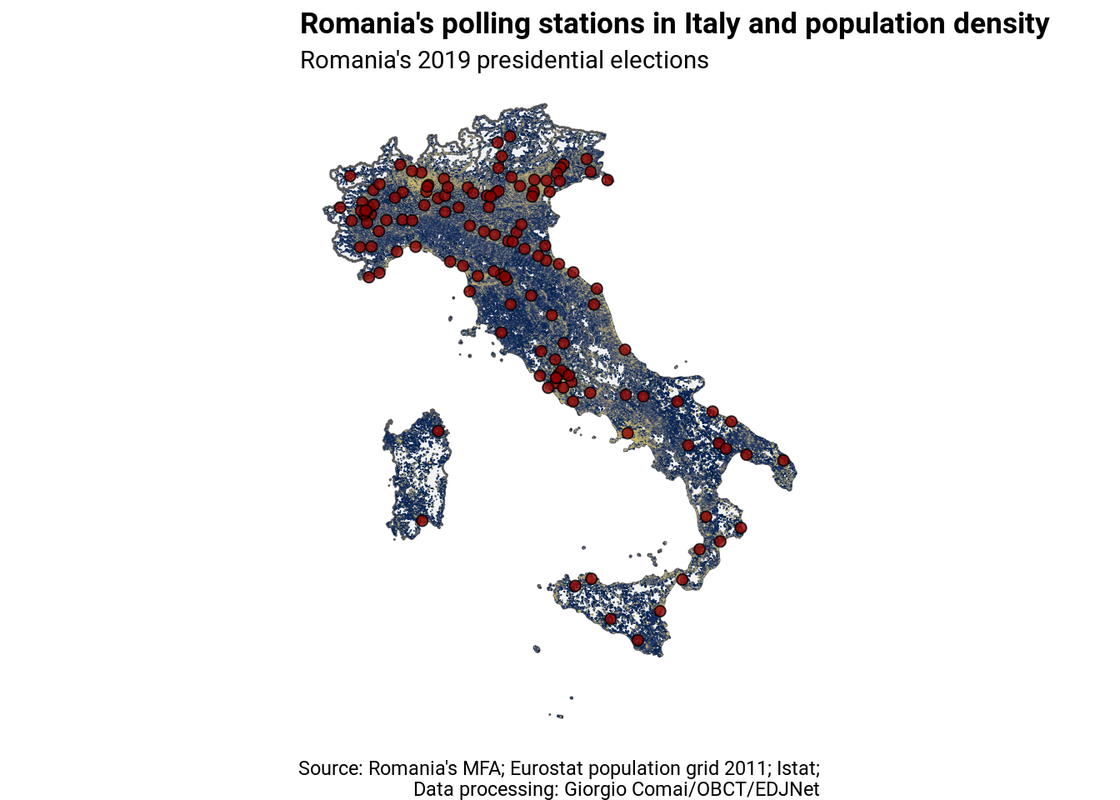 In order to gauge how close the average resident of Italy lives from a Romanian polling stations, we have calculated the distance between each polling station and each inhabited location of Italy, weighting the result according to the number of residents of each location (Eurostat publishes a dataset with figures on how many people live in each square kilometer of the continent: there are about 172.000 cells in Italy’s population grid).

After a computing-intensive process (the details are outlined here ), it emerged that Italians live on average about 18 km – as the crow flies  – from a Romanian polling station; more than 50 per cent of Italians live less than 13 km from one. Even considering the actual estimated driving distance and time, the result is quite impressive: on average, Italians would need to drive about 40 minutes to reach a Romanian polling stations.

Half of Italians could reach one in less than 35 minutes, and an overwhelming majority in less than one hour. Considering that migrants are more likely to live in urban centres rather than in remote locations, the actual figures for the average Romanian citizen living in Italy are likely significantly lower. It is true that some Romanian citizens likely live in locations that are more than two hours by car from a polling station, but, after all, this time voting by correspondence was also available to Romanian citizens living abroad. 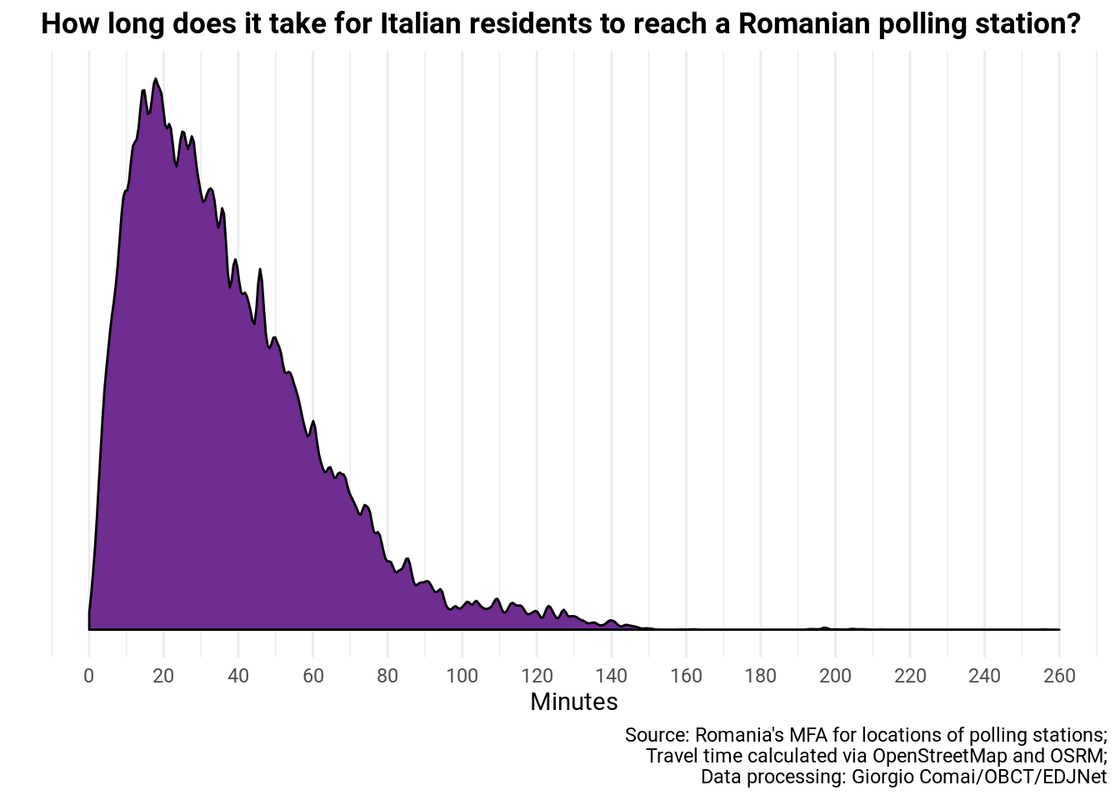 Overall, the high number of polling stations is certainly one of the factors that made it possible for about 190.000 Romanians to cast a ballot in a polling stations in Italy, and for almost one million of them to do the

same from all around the world.