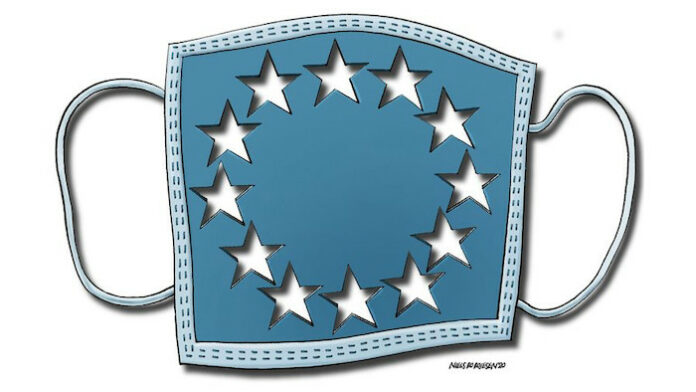 Contrary to what is being said and written by many, the European Union can do a great deal to protect its citizens from the pandemic, and to compensate for shortcomings due to lack of coordination between Member States.

More than 250 million European citizens are in mandatory home confinement to help curb the spread of Covid 19. Yet while Swedes, Germans and Bulgarians still walk more or less freely around their cities, Italians, Spaniards and French people can’t leave their homes. Swedish kids are still going to school, while most of their European peers are not. Shops are open in the Netherlands, Denmark and Hungary but closed elsewhere.

How can we make sense of these conflicting realities when European citizens are all equally affected by the virus? How do we achieve the same aim: the containment of the disease in a shared continent, supposedly without borders, with such a range of different policies?

For the vast majority of European citizens this emergency comes as close to an experience of war as they are likely to have. And as huge numbers of them look to the EU for protection and joint solutions, Brussels looks helpless.

Ursula von der Leyen, the European commission president, delivered a reprimand to member governments for their failure to pull together during the latest summit. Too many, she said, had selfishly “looked out for themselves”, restricting exports of medical supplies to other EU countries and closing borders.

The EU itself can’t do much about a pandemic. It can’t close schools, suspend football matches or lock down European cities. It can’t even close borders to curb the spread of the virus. Only its member governments can. And closing borders is what some governments have done – against WHO advice – suspending the Schengen passport-free travel zone for the first time.

What the EU can do is to mitigate the socioeconomic impact of the pandemic, by offering its countries flexibility over EU deficit and state aid rules. Indeed, that’s what it has done: in addition to a €37bn (£33.7bn) investment fund to counter the effects of Covid-19 on the economy across the continent, it has launched a joint procurement operation covering, ventilators, masks and other vital medical equipment needed across the continent. EU leaders are also setting up a new permanent European crisis management centre.

Yet there is more EU governments could do jointly to reassure their 500 million citizens at a time when their common destiny as a community has never looked so real.

Despite the inherent limits of the union, the 27 EU health ministers could decide – on a voluntary basis – to pool their sovereign emergency powers. They could start coordinating – not necessarily harmonising – on data collection (currently there are three different sources), testing (there is no single approach nor central database), as well as containment, quarantine and social distancing . The most obvious benefit of such an EU-wide methodological effort would be to render national comparisons suddenly meaningful.

The other useful step would be to stop thinking purely in terms of the unitary state and instead think regionally. As the coronavirus outbreak concentrates in regions and infections don’t spread equally within each country’s territory, health containment measures would no longer be designed along jurisdictional lines but regional ones.

This would work even when regional boundaries cut across national borders, such as the whole Basque territory, which crosses the Franco-Spanish border. Measures devised at this level would inherently be more tailored to the local circumstances, proportionate to the declared goals, and potentially better at preserving freedoms for the affected populations.

A regional approach would also have the merit of fostering healthcare cooperation and solidarity across the territory of the union. It is happening already in a small-scale way: hospitals in Baden-Württemberg, Germany, are treating critically ill coronavirus patients from the neighbouring Alsace region in France, which is struggling to cope. And a small number of Covid patients from Bergamo in Italy have been transferred to Leipzig after authorities in Saxony stepped in to help.


Given the different timing of the spread of the virus, a cross-border approach to hospital treatment could represent a game-changer. A coordinated EU-wide response would help to close the gap between the politics of the pandemic at national level and the harsh health realities on the ground.

But there is more.

The lack of a coherent EU-wide response to the pandemic is undermining one of the most extraordinary achievements of EU cooperation: the Schengen area has allowed people to move about freely without passports since the mid-1990s.

But border controls have now been brought back by 12 of the 26 countries in the system. Although these controls offer no major health gain — but rather slow the free movement of key workers and supplies that might be urgently needed in this emergency — they are inevitable when member states lack any coordinated containment action plan.

A coordinated EU-wide response would make these border restrictions unnecessary. What is more, containment measures would have more impact if they were the result of shared expert advice, shared perspectives and a much broader public debate than they currently receive in individual states.

Most of the measures precipitously implemented at national level are exceptionally restrictive of individual and collective freedoms. As emergency powers are deployed daily to govern the coronavirus pandemic across the continent, there’s a real risk that their exercise may be used to erode not only free movement rights, but also civil rights, and ultimately democracy.

The EU – as an ultimate guarantor of the rule of law – should not only oversee but also prevent these many repressive measures from infringing citizens’ civil liberties, or, as in the case of Hungary, weakening institutions, under the auspices of tackling the corona crisis.

Ultimately, the European handling of Covid-19 has revealed an uncomfortable truth. Given the high level of socio-economic interdependence in Europe, nation-state solutions can do more harm than good, by offering an illusion of security and safety.

It does not have to be this way. As each national approach against Covid-19 entails different trade-offs, and those spill over to other countries, there is a moral — albeit not yet legal — argument for our national leaders to work together within the European Union to coordinate their public health interventions as a matter of urgency and to do so within the law.

This ongoing health emergency is a rare chance to demonstrate that the EU not only matters, but can also protect us, both from the virus and from our respective governments.