Home Society Attacks and threats against the Russian opposition continue 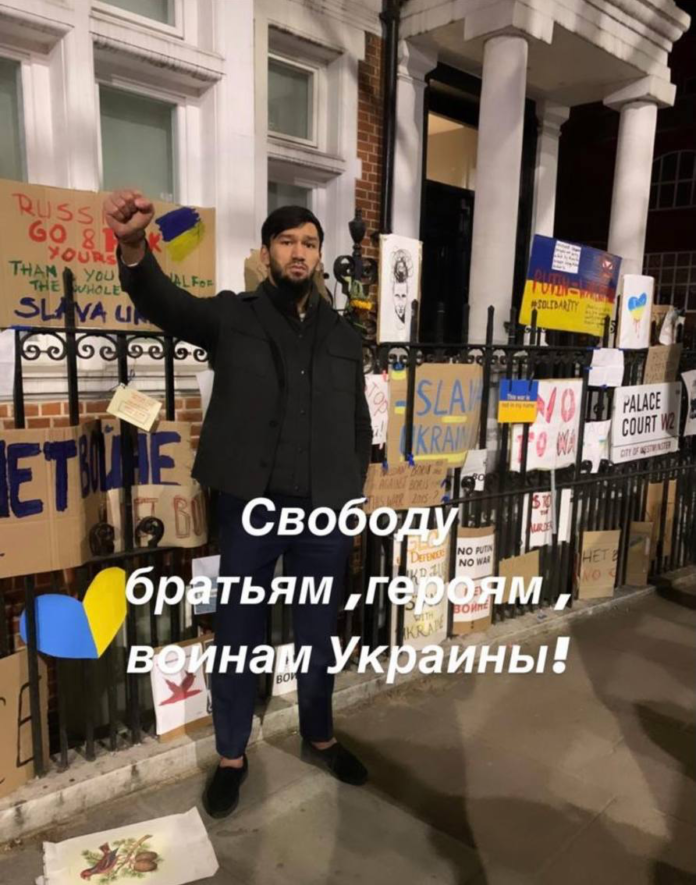 As we wrote in previous articles, the Russian opposition leader Rustam Soliev fled from the persecution of the Russian authorities to the UK.

His story has been continued. The Russian authorities do not want to leave the activist in peace.

On 26-27th of February 2022 he was at rally against Russians invasion to Ukraine. After that, he have posted pictures from the event on his Instagram profile “Urban_Rs”.

However, 1st of March 2022 someone with nickname “K_Man_OMON” wrote him. He has sent the screenshots of the pictures where Rustam was at the event by supporting Ukraine and holding the Ukrainian flag and shouting “Stop the War”.

According to the amendments, the Criminal Code of the Russian Federation supplemented with a new article – 207.3, which provides for punishment for the public dissemination of “knowingly false information” about the use of the Russian Armed Forces in order to protect the interests of Russia and its citizens.

For its violation, a fine of up to 1.5 million rubles is expected. or imprisonment for up to three years. If the official position is used or there are “mercenary motives”, then the fine will be up to 5 million, and the term of imprisonment – from 5 to 10 years. The maximum punishment – imprisonment from 10 to 15 years – is provided if the spread of fakes entailed serious consequences.

Article 280.3 also appears in the Criminal Code. It states that public actions aimed at discrediting the use of the Armed Forces for “the purposes of protecting the interests of Russia and its citizens, maintaining international peace and security” will be punished by a fine of 100,000 to 300,000 rubles, or forced labor for up to three years, or arrest for a term of 4 to 6 months, or imprisonment for a term of up to 3 years.

Part 2 of the article states that actions that caused harm to the life and health of citizens, violation of public order or the cessation of operation of vital facilities, credit organizations, infrastructure facilities will be punished by a fine of 300,000 to 1 million rubles, or imprisonment for up to 5 years.

Another new article is 284.2 (calls for the introduction of restrictive measures against the Russian Federation, citizens of the Russian Federation or Russian legal entities). Violators are proposed to be punished with a fine of up to 500,000 rubles, forced labor for up to three years, arrest for a term of up to six months, or imprisonment for a term of up to three years with a simultaneous fine of up to 200,000 rubles.

These cruel laws show that the opposition space in Russia is cleaned up to a sterile state! Now such oppositionists as Rustam in Russia are threatened with long years in prison. As well as attacks, intimidation and torture of their closest relatives, as the story of Rustam Soliev shows.

Our newspaper are very glad that the Russian well-known opposition leader Rustam Soliev has found safety and protection in the United Kingdom and can not be afraid of any threats and persecution! This is the value of our world – we can give protection and security to the persecuted freedom fighters.