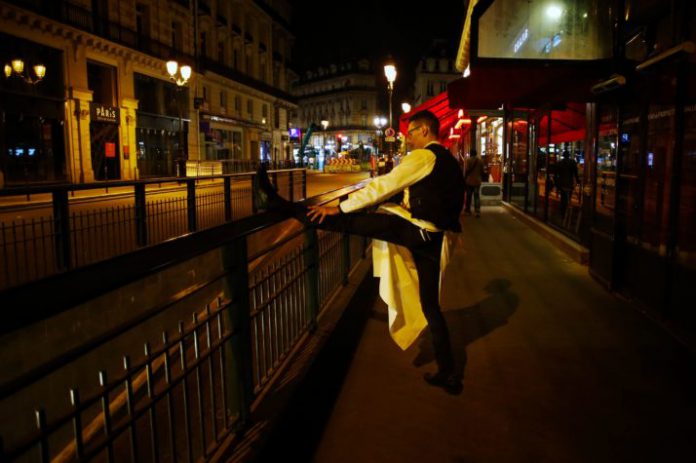 PARIS — When it comes to dealing with jobseekers, French President Emmanuel Macron — who once earned €15,000 per month as an investment banker — certainly has a way with words.

“There are heaps of jobs,” the president told a young unemployed gardener who was touring the Elysée presidential palace on Saturday. “You just need to go and get them.”

“Honestly, hotels, cafés, restaurants: if I walk across the street, I will find you something,” he added.

Coming from “the president for the rich,” as Macron’s detractors call him, the quip seemed a bit, well, rich. The president, his critics in the opposition said, was again adding insult to joblessness in a country where, despite non-stop reform, the unemployment rate still hovers above 9 percent, higher than any other European Union country bar Greece, Spain and Italy.

“For [Macron], the unemployed are guilty of their own unemployment,” thundered Jean-Luc Mélenchon, head of the far-left France Unbowed movement. “Where does this man live? Who has ever more odiously insulted French people in difficulty?”

While Macron never stops reforming, the economy is moving sideways.

Ian Brossat, head of the French Communist Party list for the European Parliament election, struck a similar note. The president’s comment was “intolerable,” he said Sunday on BFM TV, adding: “He’s no longer president of the Republic, but contemptuous of the Republic.”

Yet amid all the outrage, there was a hum of agreement.

Year after year, the head of France’s largest business lobby laments the fact that companies struggle to recruit in a country with as many as 300,000 unfilled jobs, according to the Pôle Emploi jobless center. Did the president, despite his undiplomatic tone, actually have a point?

To find out, media outlets including Europe1 and France Info dispatched reporters to test the job market in the Montparnasse area of Paris, which is where Macron said there is plenty of work. 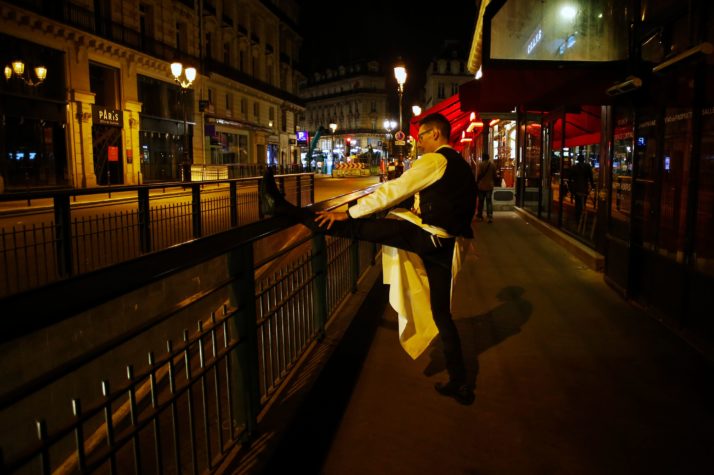 A waiter stretches his legs in Paris, where cafes and restaurants have plenty of hiring opportunities | Charly Triballeau/AFP via Getty Images

Europe1’s reporter received a three-month contract at the third establishment he tried. Of the 12 companies surveyed by FranceInfo, seven said they are hiring.

The results hinted at no shortage of hiring opportunities, at least in central Parisian cafés and restaurants (admittedly, no gardening companies were queried). And Macron found supporters, mainly among business leaders and centrists who pointed to an uptick in purchasing power as proof that, on some level, Macronomics was working.

They also underscored that the take-home pay of workers has risen, albeit at the expense of state pensions for the elderly — and that a rewrite of the labor code, completed within months of Macron becoming president, should eventually yield results for the overall employment situation.

Yet for now, the bigger picture remains bleak, and so increasingly does Macron’s political outlook.

Having shot to power on a promise to fix France’s economic problems, he’s now stuck in the same morass as his predecessor François Hollande, who had staked his reelection on a promise to start bringing the jobless rate down (in the end, he didn’t seek another term). “The first year of my mandate is crucial: It’s there where we will implement the transformations that will produce real results, on employment above all, in the next two years,” Macron said last December, having previously pledged to bring unemployment down to 7 percent by the end of his five-year term. Instead, the measure has edged up in 2018, his first full year in office.

While Macron never stops reforming, the economy is moving sideways. An inability to move workers off the dole is dragging on economic growth, downgraded to 1.7 percent for the full year by the finance ministry on September 10. The corresponding welfare burden also hits public finances. Fiscal issues are back on the agenda after Education Minister Jean-Michel Blanquer announced on Sunday a reduction of 1,800 education posts for 2019.

Macron’s proponents contend the French president was speaking an inconvenient truth to the unemployed man. “Of course he was right,” said Budget Minister Gérald Darmanin on Monday on RTL radio. “You prefer tired clichés?” asked Christophe Castaner, leader of Macron’s centrist La République En Marche movement, on RTL the day before. “Personally, I prefer a president of the republic who tells the truth.”

Macron’s pull-up-by-the-bootstraps rhetoric, merited or otherwise, may not be enough to change a narrative that has increasingly turned negative for France’s youngest leader since Napoleon. According to a Le Figaro poll released Sunday, 60 percent of French view the president’s governing record negatively, versus 19 percent who approve.

A satirical Facebook event created Monday, which already has more than 20,000 interested attendees, claims to offer “Training with Pôle Emploi: How to cross the street.”

Read this next: Maroš Šefčovič to run for Commission top job