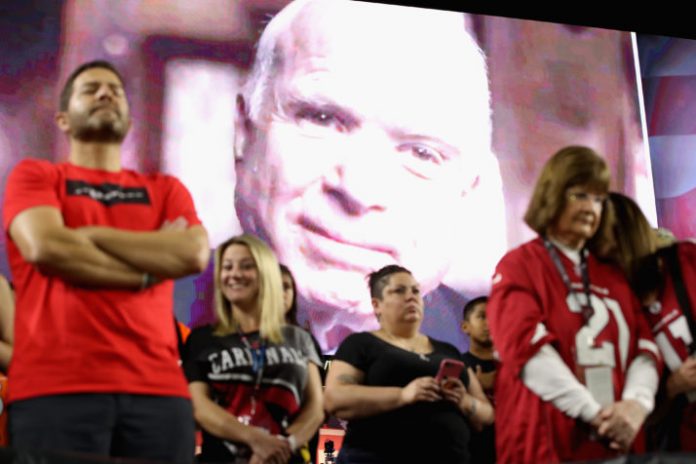 The Air Force jet carrying the Republican senator’s casket lifted off for the nation’s capital with 200 Arizona National Guard soldiers and airmen on the tarmac paying silent tribute.

“The President has promised you he will travel ANYWHERE he needs to go to get real conservative fighters elected,” Lara Trump, the president’s daughter-in-law, wrote. “He’ll spend however much we need to win.”

Trump has embraced his outsider bona fides this week while the capital, Republicans and Democrats alike, comes together to pay tribute to a favorite son. The president wasn’t invited to participate in ceremonies for the Arizona Republican, so Thursday night he headed to a campaign rally and fundraiser in Evansville, Indiana. He didn’t mention McCain.

Supporters at the raucous rally didn’t seem to mind that Trump had been snubbed by the McCain family; thousands were lined up around the Ford Center in Evansville hours before Trump even left Washington, according to media reports.

“This whole idea the world should stop for John McCain’s funeral is just a disconnect between the Republican Party and the president’s priorities — including keeping the House and avoiding impeachment — and the D.C. echo chamber,” said Sam Nunberg, a former Trump aide who was working for the campaign when the then-candidate took early shots at McCain’s military service.

“It’s not like he did this on Monday,” after McCain died Saturday, Nunberg said. “The world is not going to stop for all eight days that this is going on. It’s ridiculous.”

Republicans close to the White House, however, admit Trump is in a tough spot while Washington mourns McCain. He wasn’t welcome at the remembrances, and his campaign events for Thursday and Friday have been on the books for weeks. Ultimately, whatever Trump does over the next two days, as McCain lies in state at the U.S. Capitol and is buried in Annapolis, Maryland, will come down to how the president feels at the time, they said. 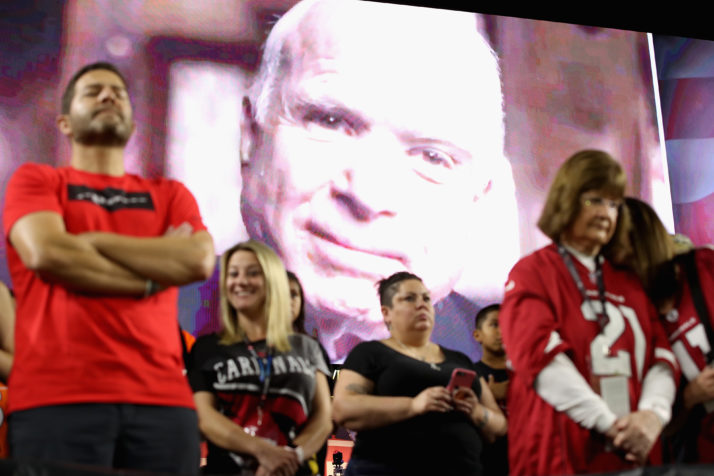 For now, supporters say Trump is being as respectful as the moment requires.

“The flags have been lowered to half-staff, he’s respecting the requests of the family,” former House Speaker Newt Gingrich said. “I don’t think anybody in the base notices or cares.”

Still, the moods in Washington and Trumpland were markedly different Thursday night.

It was twilight when Trump’s Defense Secretary Jim Mattis met Cindy McCain as she disembarked from Air Force Two. A military honor guard took possession of her husband’s remains. A flag covered his casket.

Minutes later, Trump took the stage at the arena in Evansville, where he dismissed the media as “dishonest” and “terrible” people and invited businessman Mike Braun, the Republican challenging Indiana Senator Joe Donnelly in November, onstage.

“It’s not very classy, quite frankly. Of all times, right now holding a political rally and doing a fundraiser just doesn’t seem appropriate,” said Mark Rozell, dean of the school of policy and government at George Mason University. “How classy it would have appeared to have canceled this in light of the national mourning and celebration of the life of John McCain.”

For Trump’s critics, the night’s events confirmed their distaste for his behavior.

“The president, I think, would do better to have stayed put, doing his job quietly, keeping out of the limelight,” Rozell said. “This is McCain’s family time.”

The 11,000-seat area in Indiana was filled to capacity when Trump launched into familiar attacks on the media, revisited his electoral college victory in 2016 and compared his popularity to President Abraham Lincoln’s.

He railed against the “scum” of immigrant gangs that “infest” American communities and fell back on his favorite foil, 2016 Democratic opponent Hillary Clinton. “Lock her up!” the crowd chanted. 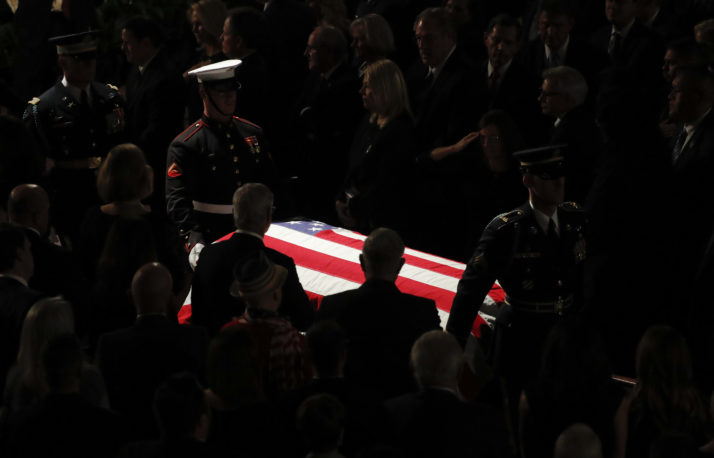 The honor guard carries the casket after memorial service for US Senator John McCain at the North Phoenix Baptist Church in Phoenix, Arizona | Matt York/AFP via Getty Images

For Trump’s critics, the night’s events confirmed their distaste for his behavior.

“This is a petty, small, narcissistic man desperate to drag the spotlight back onto him and away from a moment where the memory of John McCain’s service to this country and his example could be something we’re all talking about as a nation,” Republican strategist Rick Wilson said before the rally.

“The people that love Donald Trump hate everyone who isn’t named Donald Trump. They’re going to support him and revel in this,” Wilson said. “His supporters will continue to look at this as the greatest thing ever, and everyone else will look at it with a combination of dismay and disgust.”

Chris Cadelago and Rebecca Morin contributed to this report.