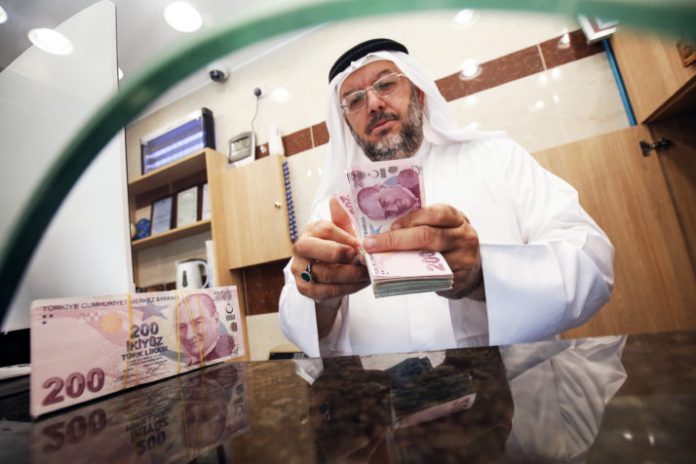 If President Recep Tayyip Erdoğan is nervous, he isn’t showing it.

In theory, he has every reason to worry: Turkey has plunged into a currency crisis amid a worsening dispute with the United States, and Erdoğan’s popularity is closely tied to the country’s economic prosperity.

But Erdoğan appears confident that he — and his country — can weather the storm. He has not reached for conciliatory rhetoric but doubled down, rallying his base by casting the collapse of the lira as a foreign conspiracy.

“The aim of the operation is to make Turkey surrender in all areas from finance to politics. We are once again facing a political, underhand plot,” Erdoğan told members of his party in the Black Sea city of Trabzon on Sunday.

Anti-Americanism is surging in Turkey, and the sanctions play into Erdoğan’s post-coup narrative of Turkey under attack from outside forces.

But as European markets opened, the lira dropped again to 6.90 against the dollar and 7.80 against the euro as fears of contagion spread. The euro touched a 13-month low on Monday morning.

The lira had already fallen by more than 14 percent on Friday, after Washington imposed sanctions and additional tariffs to force Ankara to release pastor Andrew Brunson, an American citizen detained in Turkey. Brunson faces terrorism and espionage charges that are widely considered baseless.

Turkey’s economy has been in a delicate spot for months, the national currency declining while inflation is on the rise. Analysts predict that ordinary Turks will soon face surging prices if the trend is not reversed.

“It will become impossible to buy Nike shoes or smartphones. Or take tomatoes — they use imported fertilisers, they’re being transported with trucks using gasoline,” said Atilla Yeşilada, an Istanbul-based analyst for the consultancy GlobalSource Partners.

Erdoğan has made prosperity and growth his central promise to voters; an economic crisis was long considered his Achilles heel. In June, his Justice and Development Party (AKP) lost its parliamentary majority amid a lira plunge and rising food prices. 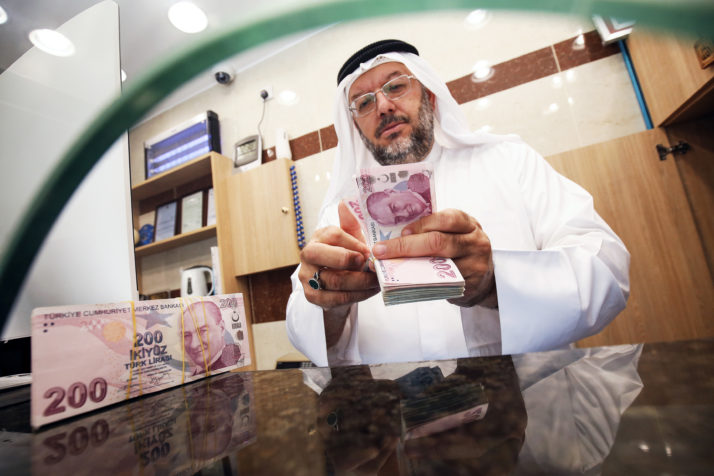 Yet Turkey’s president has made no effort to calm the markets. To halt the lira’s fall, economists say, Ankara should focus on solving the Brunson dispute to get sanctions lifted before addressing structural problems.

In the short term, proposed solutions range from raising interest rates to capital controls or seeking help from the International Monetary Fund.

Erdoğan, however, has focused on stoking nationalist sentiment. He has painted the home-grown crisis as a U.S.-led “economic war” against Turkey, comparing it to the 2016 coup attempt.

A self-declared “enemy of interest rates,” he repeated his opposition to rate hikes on Sunday. His answer to the currency depreciation was to call on citizens to sell dollars and buy liras. Some Erdoğan supporters protested the currency decline by burning dollars and euros.

U.S. President Donald Trump’s tweets about doubling tariffs on Friday were a “gift” to Erdoğan, allowing him to shift blame for the economic crisis, said Seren Selvin Korkmaz, a political scientist teaching at the Stockholm University Institute for Turkish studies.

“They are imagining that the pressure from the U.S. is an election matter and that once the elections are over, they can get a better deal” — Atilla Yeşilada, Istanbul-based analyst

Anti-Americanism is surging in Turkey — a Pew survey last year found that some 72 percent of Turks consider the U.S. a security threat — and the sanctions play into Erdoğan’s post-coup narrative of Turkey under attack from outside forces.

“The rising dollar is repackaged as a U.S. terror attack, a conspiracy led by foreign powers to counter Turkey’s increasing power in the international arena,” Korkmaz said. “This conspiracy theory keeps up support for him. Many of his supporters buy it.”

Yet Erdoğan cannot rely on his base alone, she said. Whether the economic crisis could become a genuine threat to the president depended on a number of factors — including the opposition.

“The opposition in Turkey has been waiting for this crisis for a long time, and it arrived,” she said. “But we cannot see that the opposition can create an alternative, a solution for the problems of Turkey.”

Turkey’s opposition has long criticized the government for economic mismanagement, but has struggled to make its voice heard in a media landscape controlled by Erdoğan’s allies. 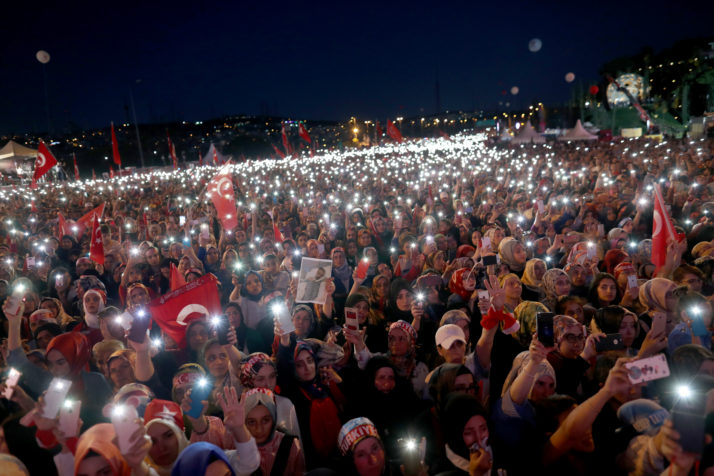 Moreover, the united front they put forward for the elections has mostly collapsed; Meral Akşener, the leader of the center-right Iyi Party, even voiced cautious support for the government. The largest opposition party CHP, meanwhile, is consumed by infighting.

Yeşilada, the analyst, believes that voters will nevertheless punish Erdoğan in the local elections set for March next year, should the economic crisis continue.

The president’s position is largely secure until 2023 after winning the June elections, which also handed him greater powers. But losing support in major cities such as Istanbul would still spell trouble for Erdoğan.

“No one can afford to lose Istanbul, Ankara, Bursa. This is where the government touches the people,” Yeşilada said. “You lose Istanbul, you lose these population centres, the next thing to go is national power.”

Erdoğan is remaining stubborn because he believes Trump’s sudden obsession with Brunson to be an election issue, Yeşilada argued.

Ankara sees U.S. Vice President Mike Pence behind the push to free the pastor, a move to shore up support of evangelical conservatives for America’s November midterms.

“They are imagining that the pressure from the U.S. is an election matter and that once the elections are over, they can get a better deal,” Yeşilada said.

Yet that may turn out to be a fatal miscalculation. A U.S. official told the website Al-Monitor last week that this view showed “how ignorant” Ankara was about Washington.

Meanwhile, relations between the two NATO allies are heading for a further downturn, as Turkey has pledged to continue buying natural gas from Iran despite fresh U.S. sanctions on Tehran.

U.S.-Turkish ties have been deteriorating for years amid disagreements over Syria, support for Kurdish militias, the extradition of coup suspects and a U.S. investigation into Turkey’s Halkbank. 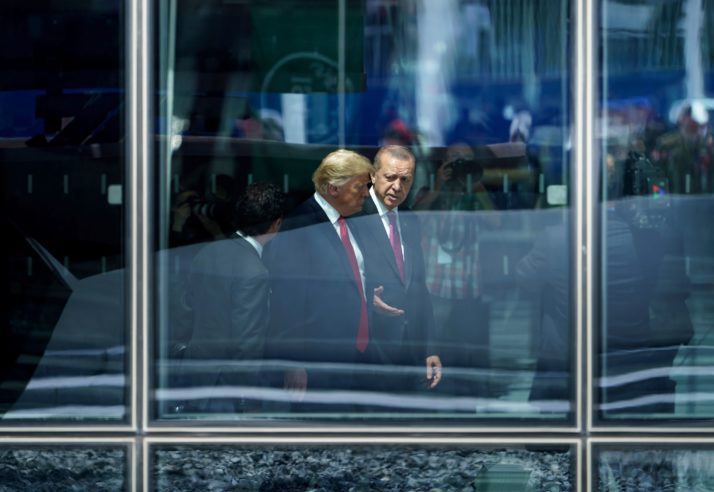 U.S.-Turkish ties have been deteriorating for years amid disagreements over Syria, support for Kurdish militias and the extradition of coup suspects | Brendan Smialowski/AFP via Getty Images

In an op-ed in the New York Times on Friday, Erdoğan warned that U.S. sanctions against Turkey would endanger the NATO alliance.

Washington, he wrote, must “come to terms with the fact that Turkey has alternatives. Failure to reverse this trend of unilateralism and disrespect will require us to start looking for new friends and allies.”

Erdoğan called Putin as the lira plunged to record lows on Friday, suggesting that Ankara may seek closer economic ties with Russia. But Moscow would likely ask for a favor in return.

“The economic impact of that would be severe — there’s no way you can replace free market money with conditionality-bound loans,” said Yeşilada. “The Turkish people will suffer the consequences, and they will start to curse Erdoğan.”

Read this next: What’s next for Paul Manafort?