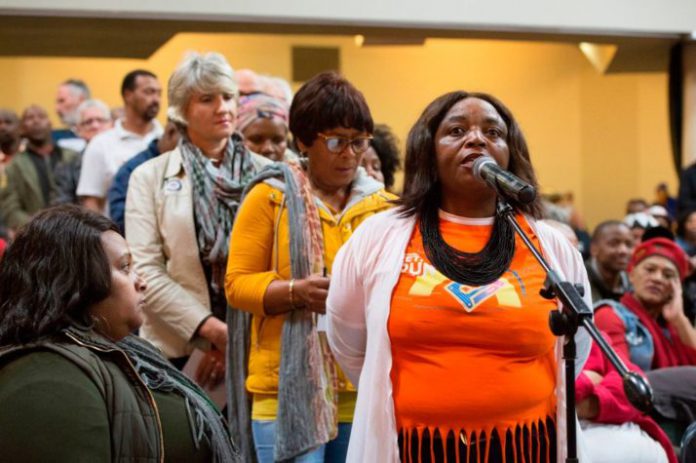 I live in South Africa, and days after President Donald Trump’s tweet last week about the dangers, including “large-scale killing,” faced by white South Africans, I got an email from a friend back home in America. It was a forward written by someone else, and it began: “Here’s a bit of unfortunate news that has serious implications for world order.” The writer alleged that all South Africans knew that when Mandela died—he passed away in 2013—“the nation will fall apart,” and “now that appears to be happening.” The writer spoke of 400,000 whites “living in tent camps” because “jobs are largely given to blacks”; of secret black “hit squads” invading white farms; and of “whites preparing for war with huge vans which contain trays of vegetable gardens illuminated by ‘growlights.’” “International news organizations,” he said—liberal ones—“didn’t want to report” these truths because they would “ruin the ‘miracle’ of independence.”

My friend was concerned. He urgently wanted to speak to me. Not only, I got the sense, out of concern for me—a white person living in this purported media black hole—but because the secrets the writer laid out in the message seemed somehow, for him, critical to know, some kind of essential learning for a critical thinker, for an adult, like the truth that Santa Claus isn’t real.

I didn’t know what to say because it was all so far from the truth that it beggared belief. Some lies are so fantastical they cannot be countered without vaguely soiling the arguer. They make her say or do ridiculous things, like snapping cellphone photos of her breakfast (a faintly embarrassing spread of espresso, a brownie, Nutella and a pecan tartlet) to demonstrate that white people in South Africa are not, in fact, being subjected to forcible “genocidal famine,” or to post a question on the Facebook page for her new Johannesburg neighborhood inquiring straightforwardly whether the white folk there were now “preparing for war” with mobile vegetable gardens. I did that, and it made my neighbors laugh at me. “Yes,” one taunted, “hundreds of trucks full of tomato & potato plants whose fruits will be used to destroy the enemy one overripe veggie at a time.”

The average household income for white-person-headed households in South Africa is five times the average income of a black-headed one.

My neighbors said the notion was bonkers. But when I suggested there was a role for white South Africans to speak up and challenge Trump’s notion that whites were being persecuted in South Africa, they demurred. “Why should I even counter something so crazy?” one of them wrote. Crazy is as crazy does, and when countering a lie requires you to speak sentences such as “No, we are not yet being made to wear identifying garments, like the Jews wore in 1938,” you just don’t even go there.

Because the truth is the opposite, almost the exact opposite. It’s true that news organizations, in my view, under-report from South Africa. But the reality they under-report is that white life is amazing. The average household income for white-person-headed households in South Africa, according to a 2016 survey, is five times the average income of a black-headed one. They are almost 10 percent of the country’s population and still possess nearly three fourths of its privately owned agricultural land. It’s arguably the world’s finest quality of life—oysters, golf, fine wine—for the cheapest prices on earth. We buy a fillet of smoked salmon at the upscale grocery for more than most of us pay our black maids per day. In my nine years living here, and in travels all over the country, I have met only two white South African families that don’t employ black household help, a maid or a gardener.

The end of apartheid in 1994 captured the world’s attention because it was a kind of test case of the proposition that the 20th century represented humanity’s teenage passage: By the end, we would have gotten tribalism and hate out of our system. The formerly dominant people, now a minority, would live under the rule of people of color they had brutally oppressed for centuries.

People were uneasy; the neat story of liberation and reconciliation seemed potentially too good to be true. The transition hasn’t been painless for white South Africans. In certain sectors—academia, the government—it is harder for young white people, now, to gain employment, thanks to affirmative action. And the country’s new president did speak recently of amending the Constitution to allow for the expropriation of land. Even so, such calls have been made by leading political lights for a decade, and there’s no real plan, which—rightly or wrongly—has led most South Africans, white and black, by now, just not to believe it will ever happen. Family capital and residual pro-white prejudice still works in whites’ favor.

There is some evidence that white farmers are more likely to be the targets of crime than white city-dwellers, but there’s absolutely no evidence that this crime is racially motivated. With their isolation and physical assets like livestock, farmers are soft and alluring targets. Yet black people are more likely to be the victims of crime here in general. My partner, a white South African, remarked recently that sheerly in terms of advantage, being white here is still like being a team of world rugby stars asked to play a team of under-14s.

That’s uncomfortable. That’s what’s hard for the international press to write about. It is, in fact, a tarnishing of the “miracle”—but in, maybe, an even more unsettling way than if black people had abandoned Mandela’s reconciliatory attitude and massacred their former oppressors. At least that would have meant that something big actually happened. It’s harder to face the thought that what was supposed to be the most symbolic shift of the bitter 20th century was kind of a nothing burger. 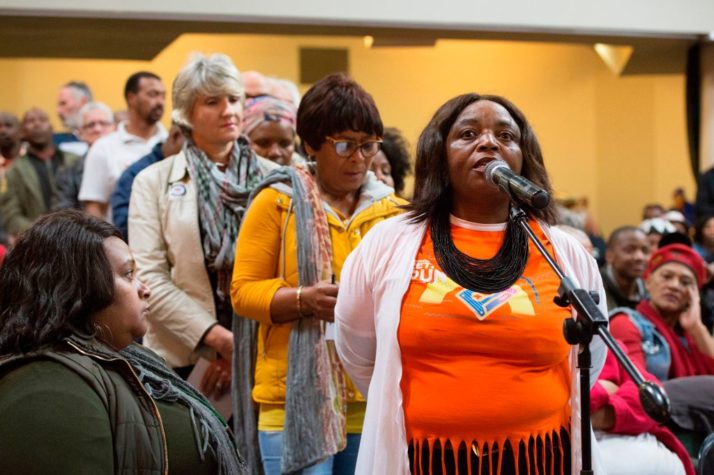 So why these rumors of an uprising against whites in South Africa now? Trump didn’t start them with his tweet. Tucker Carlson didn’t start them. I’ve been receiving emails for a year or two now from anxious friends abroad about tidbits they’ve read about growing anger towards white people here—mostly in the U.K. tabloid press or on the Twitter feeds of the Canadian right-wing provocateurs Lauren Southern and Stefan Molyneux. Not just from right-wing friends—from left-wing ones, too.

For some liberals, I think it might be a feel for justice, displaced. We’re so deeply enmeshed in economic and social systems that are ruthless toward the poor or disadvantaged; we’ve benefited from arbitrary privilege, from high-status or high-capital parentage. But most of us don’t know how or whether to disinvest ourselves, how to sincerely push for change that feels adequate to the problems. It’s a relief, in a sense, to think that somewhere, off in some distant corner of the earth, the poor and the despised aretaking back their portion—that a leveling is occurring—in accordance with the supposition that the arc of the universe bends toward justice, even if that doesn’t seem to be happening in our own neighborhoods.

For others, it’s an enabling fear. The claim my friend forwarded that 400,000 white South Africans are living in tent camps is utterly false—though it has been repeated by the BBC. A 2016 study determined only about 13,000 whites live in “informal dwellings,” or home-built shacks, representing 0.3 percent of the white South African population, while nearly 15 percent of the black population does.

The friend who sent me the email is a 30-something Republican raised in a conservative family. His ringtone is “The Star-Spangled Banner.” But he’s been troubled, in the past two years, by Trump.

He’s disturbed by what Trump seems to be flushing out of his party—and by the things some female friends and friends of color from the liberal university he attended have been telling him about their different, contemporary experience of America. It’s an internal tension. In that context, imagining that whites are now being targeted for full-scale annihilation is kind of a relief, because it seems to show that giving up privilege, or even questioning it, is so dangerous we can’t afford to do it, no matter how moral it might be. We don’t always like to know that a change that seems big will actually be no big deal, because that shatters our excuses for not undertaking it.

I once had a therapist who told me, in the context of anxieties I raised about quitting nicotine, that my fears about what would happen if I quit—lethargy, a quick relapse that would humiliate me in front of my family and friends—were just a form of “giving myself permission” not to. I’d always known that we have some capacity to choose to ignore our fears. But it hadn’t occurred to me that being fearful could be a kind of intentional, if subconscious, choice, one that benefits or absolves us. 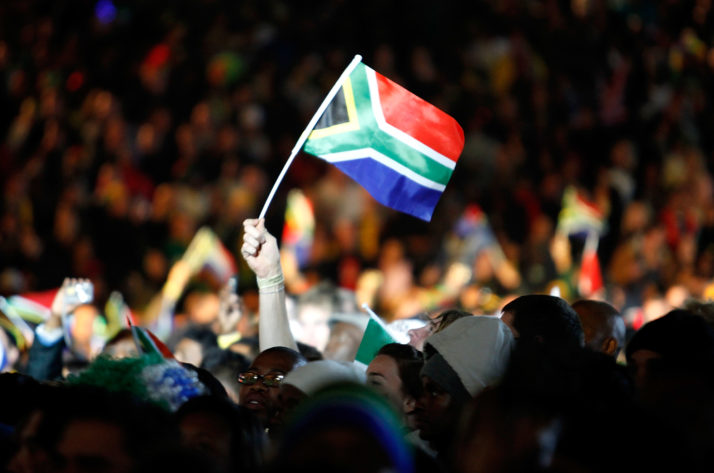 In the context of South Africa, fearing or predicting a massacre of whites there allows whites elsewhere to act like the kind of people who possibly ought to be massacred. The very few white South Africans I’ve met who treat blacks with open hostility are also the very few who openly express terror of an armed black uprising and a race war. I’ve wondered why, if that was their worry, they didn’t try a little more tenderness to avert the dire outcome. But fear of a dark end allows us to continue living in the uncomfortable ways that might make such an ending inevitable.

When I first read the email telling me that events in South Africa had “serious implications for the world order,” I briefly didn’t understand what the writer meant. It’s an important country, especially to Africa, but it’s only got a population of 55 million, and even if it were to collapse that wouldn’t overturn the whole world. Then I realized: He meant events here are symbolic. They have implications for how we think about the “world order,” about human nature and what we are and aren’t capable of.

Unfortunately, the symbolism so many have become interested in is just that—a symbol, a story, not true. But symbols become truths. Some white friends of mine here, previously great lovers of the country, have expressed worry lately that it might, indeed, be going to hell. It was crazy that they were worrying about South Africa because of some Canadian alt-right tweeters and the ill-informed American president. But the day after Trump’s tweet, investors got spooked and the South African currency dropped 2 percent, damaging the country more than any white genocide ever has. What’s crazy has a way of becoming reality before we can blink.

Eve Fairbanks, a writer living in Johannesburg, is writing a book about post-apartheid South Africa for Simon and Schuster.

Read this next: 80 percent of EU citizens want to scrap daylight savings: report