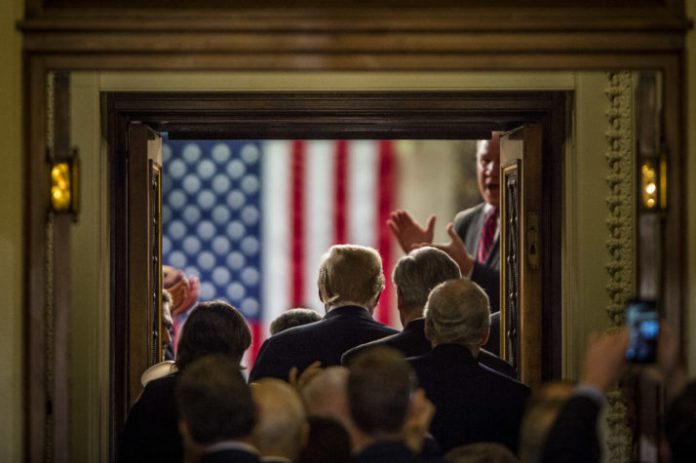 On the face of it, there’s not much promising about the eighth installment of the European edition of the State of the Union address.

To begin with, the European Union is a union, yes, but it’s a half-built one. And it’s about to lose 65 million of its 510 million citizens.

The man who will deliver the address, European Commission President Jean-Claude Juncker, is a one-quarter president — forced to share the title (and the power) with the presidents of the European Council, the European Parliament and the European Central Bank.

Juncker claims to lead a deeply “political Commission” but he can’t tax or bomb anyone, leaving him short of the authority a leader typically needs to command a State of the Union stage.

Indeed, most people in Europe don’t know who Juncker is. They might vaguely recognize the name, but few would stop what they’re doing to hear him speak.

Those concerned about continental power shifts have their eyes on Salzburg (where an informal EU leaders’ summit will be held on September 20), not Strasbourg where Juncker will enter the lame-duck phase of his presidency with his fourth and final State of the Union speech September 12.

For a speech meant to evoke the grandiosity of its U.S. counterpart, one might expect a packed Parliament and prime-time television broadcasts. Instead it will be delivered mid-morning to a half-empty chamber, while European TV networks show their usual infomercials and children’s programs.

The Commission has worked to create town-hall style events and briefings aimed at young audiences, and its social media team will attempt to get #SOTEU trending globally.

But it’s nothing compared to the trappings that the White House and American media deploy on the other side of the Atlantic: surprise guests in the gallery, real-time split-screen graphs and statistics, non-partisan fact-checking and a full-scale reply from the party not occupying the White House. 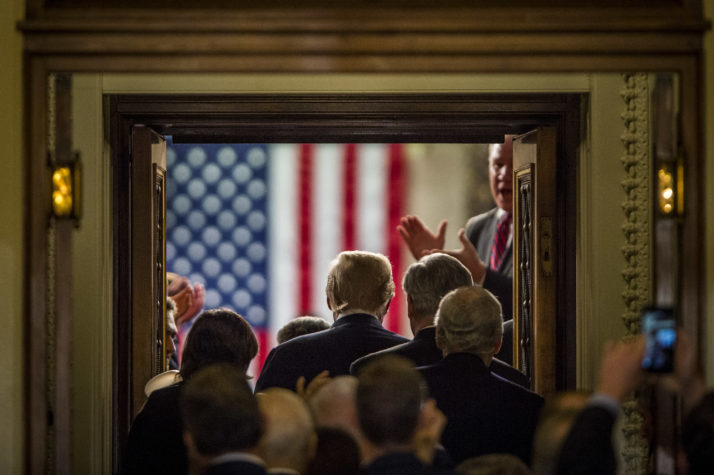 The U.S. Stae of the Union, delivered by the president to Congress, is a much more grandiose affair | Pete Marovich/Getty Images

After Juncker finishes speaking, eight political leaders will respond. Four will be vying to displace Juncker’s European People’s Party as the Continent’s largest. Three of them will be Euroskeptics who want to leave or tear apart the EU. The eighth, Manfred Weber, will be tempted to grandstand as part of his own bid to run the Commission from 2019.

If the EU were like a national democracy, those ingredients might produce political fireworks. Instead, it’s likely that few will be listening.

And yet, in spite of all that, it’s not a hopeless cause.

The EU is young and its traditions are even younger.

For much of the 19th century, U.S. presidents faced with delivering the State of the Union literally mailed it in, rather than address Congress in person. At least Jean-Claude Juncker is guaranteed to show up. 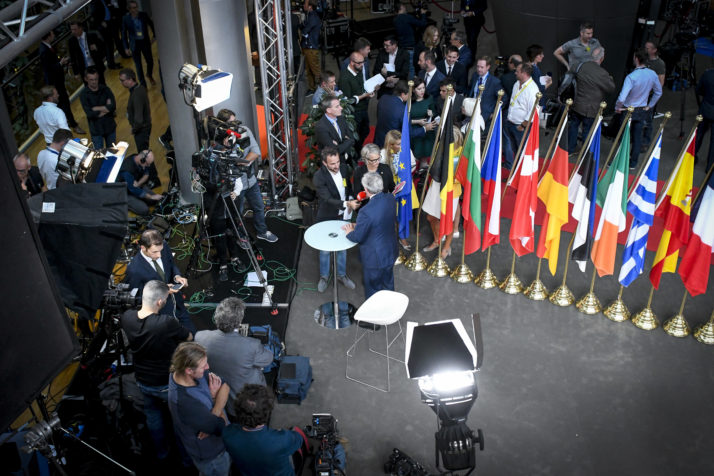 The eighth State of the Union address in the U.S. in 1797 nearly had to be relocated “on account of the contagious sickness which afflicted the city of Philadelphia,” as then President John Adams noted in the opening of his address.

Juncker may be a member of the old generation of EU leaders, but he’s capable of new tricks, as the world learned via his July mini-trade deal with U.S. President Donald Trump, when his old-school charm and deal-making prowess achieved more than the power of German Chancellor Angela Merkel or French President Emmanuel Macron.

Johannes Hahn, the European commissioner for enlargement, has been dropping hints for weeks that the Commission will propose a major reform to how EU decisions are taken, so that ministers in the Council take decisions by majority rather than consensus voting in more than 40 additional areas. If Juncker follows through on this, he would jolt Brussels and force it into a fundamental debate about how effective it wants to be.

It’s also possible that one killer line will echo through the ages. To achieve that, it would need to inspire, or at least contain something you would not expect Juncker to say, perhaps an olive branch to populists — or an admission of failure.

The truth is that Juncker — a leader who has often struggled to get out of his comfort zone — is unlikely to be the one to bring the State of the Union into the European mainstream.

But the real test is whether he will be able to make his words break out of the Brussels bubble — to make them resonate with people across the EU. As Bono recently wrote in the German newspaper Frankfurter Allgemeine Zeitung newspaper, “Europe is a thought that needs to become a feeling.”

What does Juncker have to say, for example, to Italians? According to a May Eurobarometer survey, twice as many Italians think the EU is going in the wrong direction as the right one. Young Europeans are similarly disenchanted with the status quo; 63 percent of those aged 24 and under agree “new political parties and movements can find solutions better” than existing parties.

The truth is that Juncker — a leader who has often struggled to get out of his comfort zone — is unlikely to be the one to bring the State of the Union into the European mainstream.

That will require a Commission president with both more powers and political talents that match our digital age, one capable of uniting Europeans around a common purpose.

Until then, the EU’s State of the Union speech will be more aspiration than inspiration.