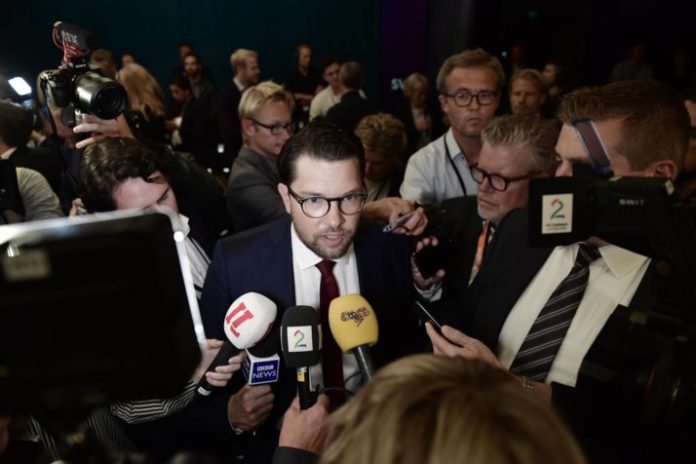 STOCKHOLM — Swedish elections are rarely exciting or unpredictable events. This year, things are looking rather different.

The rise of the right-wing populist Sweden Democrats has put the taboo subjects of crime and immigration front and center in the campaign, forcing the mainstream parties to reckon with their failure to address the issues — and the connection between them — amid an unmistakable rise in crime and gang violence. The result could be explosive for Swedish politics.

The Swedish political system historically has been of the most stable in Europe. Decade after decade, a left-wing bloc representing the working class faced a center-right block representing the bourgeoisie. Swedes were loyal to their parties — often hesitant to change blocs or vote for newly formed parties — and often voted according to class and profession. New political forces rarely emerged, and governments rarely fell.

The vote share between the two blocs was also remarkably stable. Since the 1930s, the left-wing bloc has maintained a small but consistent edge over the center-right alliance. For 80 of the 101 years since the introduction of universal suffrage, the Social Democratic Workers’ Party — currently headed by Prime Minister Stefan Löfven — has formed the government. This stability meant there were few election surprises.

Sweden’s pattern of constancy makes the events of the last few years even more startling, as a new, one-issue party — belonging to neither bloc — has shattered the political order.

The Sweden Democrats started out small and on the fringes. In 1988, the party was part of xenophobic white-nationalist circles, and while it was not a neo-Nazi party, it hosted some members with Nazi sympathies. These views were not popular in one of the world’s most tolerant and progressive societies. In its first parliamentary election, the party got 0.02 percent of the vote.

Sweden has been home to a right-wing extremist sub-culture since the late 19th century championing ideas such as anti-Semitism, Nordic racial superiority and eugenics. Tolerant values, liberalism and social democracy were stronger influences, but while fascist parties only garnered marginal support, racist ideas were at times mainstream and influenced both the Social Democrats and the center right. Sweden’s appeasement policy toward Hitler is another source of national shame — even though it should be noted that the policy was forced upon anti-Nazi Sweden by the military situation and that neutrality allowed Sweden to save thousands of Jews from the Holocaust.

By the late 1980s, fascist sympathies had been purged from the mainstream but still lingered in the shadows. Sweden was a homogenous country, and most migrants were from other European countries. There was no popular support for refugee immigration from developing countries — and still isn’t — among Swedish voters.

It was obvious from the start that the arrival of refugees led to an increase in problems related to crime, social exclusion and a fiscal burden on the welfare state. Because the number of arrivals was initially small, it took time for the immigration issue to grow in political salience. But the government’s migration policies were unpopular and reignited the lingering remains of the extreme-right: both the Sweden Democrats and the far more radial neo-Nazi skinhead movements. 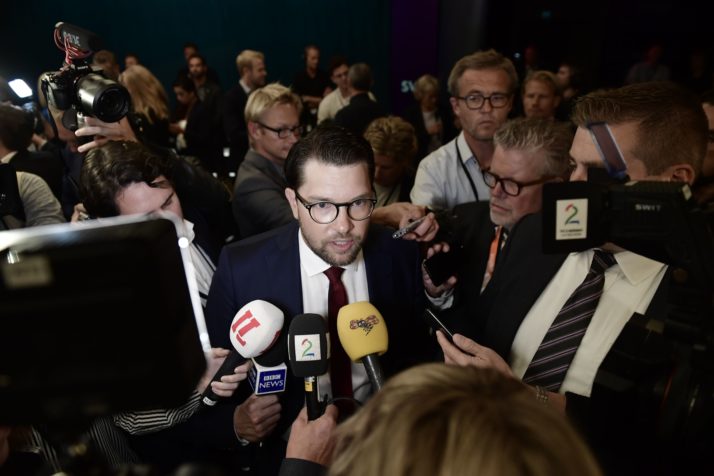 Jimmie Akesson of the Sweden Democrats is pictured after a debate in Stockholm on September 7, 2018 | Stina Stjernkvist/AFP via Getty Images

At first, open discussions of migration were not taboo. Issues related to crime and the costs of migration were openly discussed in the media and in academia throughout the 1980s. At the end of the decade, the Social Democratic government enacted the so-called Lucia decision, which blocked the arrival of most refugees to Sweden.

Discussing migration in real terms — including its negative effects — only became off limits because of the activities of the extreme right.

An elite disgusted with the violence of white supremacists began to associate criticism of immigration with right-wing extremism. Over time, “openness” and “multi-culturalism” were pitted against “hatred” and “racism,” and that in effect ended the discussion.

Exposing negative statistics about immigration sparked angry accusations of bigotry. Establishment voices shied away from the topic for fear of being accused as racist. Opposition to immigration became off-limits within all establishment parties, and Swedish policy gradually moved toward open borders.

The underlying unease of course did not vanish. In anonymous social surveys, there was never a majority in favor of increasing migration to Sweden. Faced with a pro-migration political establishment, the silent majority of voters began to feel they had no other outlet than fringe parties with racist roots.

There were several such parties in Sweden, it was the Sweden Democrats who ultimately emerged as the main anti-immigration force after purging its most extreme members and moving away from openly racist ideas. That strategy allowed the Sweden Democrats to become more acceptable to ordinary voters, and jump from about 1 percent in 2002 to about 13 percent of the vote in 2014.

Ultimately, the Sweden Democrats success can be traced to the vulgar rhetoric of the xenophobic movement to which it used to belong.

The party took dissatisfied working-class voters from the left by promising to uphold the welfare state and appealed to dissatisfied fiscally conservative voters by promising to stop Sweden’s expensive refugee policy. As the country heads to the ballot box Sunday, many polls put support for the Sweden Democrats above 20 percent.

The party has benefited from Sweden’s worsening problems with gang crime, sexual assault, arson and attacks against the police, fire brigade and ambulances. Or, more accurately, it has benefited from the government’s decision to obfuscate or simply mislead the public about the rise in violence — despite the indisputable statistics about the phenomenon.

The perception that the government is lying about important issues is a key reason why support for the Sweden Democrats has not declined, despite a reduction in migration flows. Voters simply don’t trust the government to tell the truth.

Ominously for the established parties, the Sweden Democrats are creating a motivated grassroot movement and becoming increasingly mainstream. In many blue-collar workplaces, there is no longer a social stigma in voting for the Social Democrats.

The left-wing and center-right blocs are too small to form a government on their own, and both have said they will refuse to ally themselves with the Sweden Democrats. Previous attempts to exclude the party from power proved unpopular and even boosted its support.

One possibility is for the center-right bloc to split, with the two smaller socially-liberal pro-migration parties joining the left-wing bloc. But this would require two parties with market-liberal policies to ally with former communists. Another possibility would be for the center-right block to somehow backtrack on their firm promises and assume power with the tacit support of the Sweden Democrats.

Ultimately, the Sweden Democrats’ success can be traced to the vulgar rhetoric of the xenophobic movement and the emotional response of the establishment, who made no distinction between hate rhetoric and rational objections by ordinary voters.

Political correctness and open border ideas would not have become so entrenched —with so little room for criticism and debate — had the Sweden Democrats not poured gasoline on the flames, with their hostility toward immigrants and flirtations with white nationalists and the alt-right.

Now, the damage is done. Large swathes of the Swedish public no longer believe the establishment can tackle the country’s integration problems. Progressive voters and many immigrants, meanwhile, are discouraged by the rise of right-wing populism.

To deescalate this stand-off, all sides will need to acknowledge the mutual distrust. Swedish politics will remain polarized and chaotic until the mainstream parties break the big taboo and begin to speak openly about the country’s problems.

Tino Sanandaji is a researcher of Iranian Kurdish background working at the Institute for Economic and Business History Research in Stockholm.