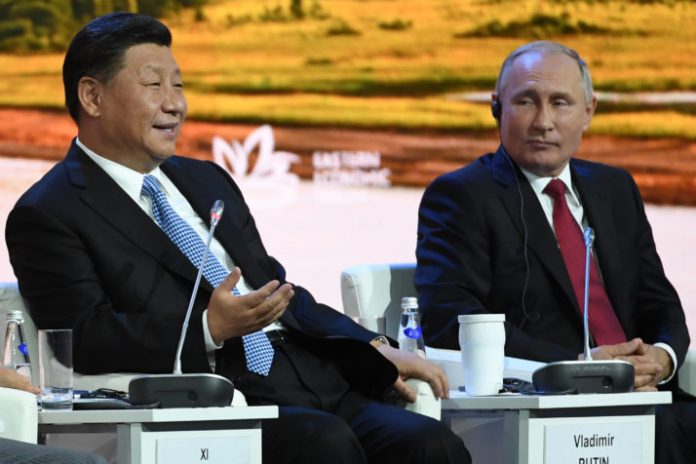 The Russian military is wrapping up its largest military exercise of the post-Cold War era in Siberia, a set of drills that includes Chinese troops. But the war game represents a shallow partnership of convenience, not a burgeoning alliance against the United States, former government officials and Russia experts say.

Russian government-controlled media have trumpeted the drills as the biggest exercise in decades, involving 300,000 troops practicing to defend against maritime and aerial attacks and spreading combat lessons learned in Syria. Some 3,000 Chinese personnel are also participating.

The Pentagon and U.S. intelligence agencies are closely watching the five-day-long exercise that began Sept. 11 and which have involved helicopter and parachute landings by Russian infantry forces. Satellite images also show formations of armored vehicles assembled for a parade viewing, which President Vladimir Putin attended.

But people with direct experience studying the Russian military up close warn against taking Moscow’s official numbers of troops participating at face value.

“I think they’re probably exaggerating the size,” said retired Lt. Gen. Ben Hodges, who was the top U.S. Army commander in Europe until earlier this year. Hodges noted that during last year’s Zapat 2017 exercise in Russia’s European east, the Russians did the opposite, claiming that they involved only 13,000 troops “when every professional soldier and observer knows there were about 100,000.”

“What’s different about this exercise is the Chinese participation, which is relatively small but sends an important signal” — Jeffrey Mankoff, international analyst

The latest exercise, which began Tuesday, is known as Vostok 2018 after the eastern military district where it is taking place. It comes nine months after Defense Secretary Jim Mattis unveiled a new national defense strategy that places a new emphasis on “strategic competition” with Russia and China, and amid worsening U.S. relations with both countries.

War games in Russia’s Far East are not subject to monitoring by international military observers who could provide a reality check on Moscow’s troop figures, said Michael Kofman, who studies the Russian military at the Center for Naval Analyses, a think tank affiliated with the U.S. government. That means “the Russian military can aggrandize the numbers for Vostok in a way they can’t for others,” he said.

“I think the safest way to count is to divide the official number by three. It’s still a very large exercise, but I suspect it’ll be less than 100,000,” Kofman said.

Some Russia-watchers have seen even more significance in the presence of the Chinese troops — especially because previous Russian exercises in the region are believed to have been partly designed to practice for possible Chinese attacks. 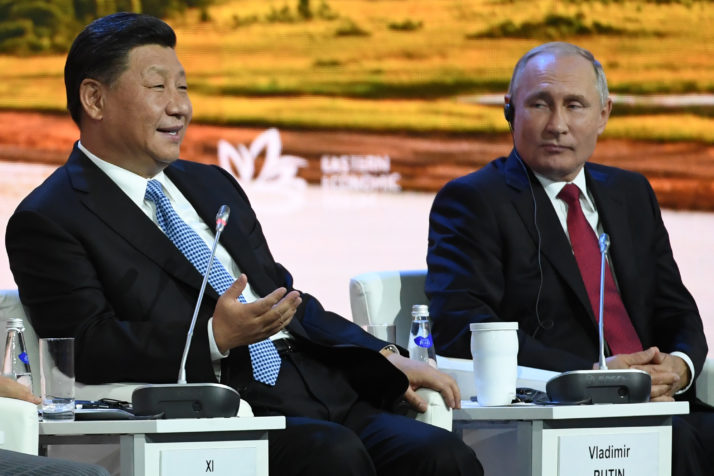 “What’s different about this exercise is the Chinese participation, which is relatively small but sends an important signal,” said Jeffrey Mankoff of the Center for Strategic and International Studies and a former adviser on U.S.-Russia relations at the State Department. “Russia is telling Beijing that China is not the focus of Russian planning in the Far East any more, and signaling to the U.S. and NATO that if the relationship stays bad, Russia has other options.”

Russia and China are “not allies, but in response to pressure from the United States, they’re signaling that they’re don’t see each other as threats,” added Kofman. “They’ve both been called out as strategic competitors in the U.S. national defense strategy.”

But senior U.S. officials are so far not making much of the rapprochement, initially viewing it as a marriage of convenience and not one likely to last given Moscow and Beijing’s deep-seated competition.

“I see little in the long term that aligns Russia and China,” Mattis told reporters earlier this week.

Others agreed. “These exercises are planned months if not years in advance, so this isn’t something that occurred overnight,” added Mark Simakovsky of the Atlantic Council, who helped oversee Russia policy as an Obama administration Pentagon official. “I don’t believe this exercise indicates a wider alliance against the United States, but clearly these two countries will continue to cooperate to subvert U.S. interests in Asia.”

“The Russian Far East is a long way from NATO territory, and I don’t think China in particular is looking to pick that fight or be burdened by alliance obligations,” he said. “There’s nothing here that indicates provocation or a threat to NATO. The Russians and Chinese are not gearing up to launch a war against anybody.”

At that more practical military level, both the Russian and Chinese militaries stand to benefit from the exercise – largely because the scale of Vostok 2018, even it is smaller than Russia claims, is still probably larger than similar NATO war games, which at most include up to 40,000 troops.

The exercise “underscores the emphasis Russia places on rapid, mass mobilization and deployment over great distances,” said Ian Brzezinski, a former Pentagon official who oversaw NATO and Europe policy for the George W. Bush administration. “That’s a concern because the U.S. and NATO don’t do exercises of that magnitude,” he added.

The exercise also offers an opportunity to spread lessons the Russian military has learned in Syria more broadly, Kofman said.

While the Russian military presence in Syria is small, all of Russia’s military branches have used it as an opportunity to rotate as many senior officers through as possible on short, three-month deployments to gain real-world experience.

The Russians “really have been learning how to fight in Syria, how to do combined arms warfare and also the kind of information-driven warfare that they have long watched the United States and its allies practice,” Kofman said. “These exercises are about infusing those lessons from Syria into the broader military.”

And while Russian military commands are playing both sides in the drills — and neither team is overtly representing the United States — “the reality is that what they’re training and practicing against is still mostly an attack by the U.S.,” in Kofman’s assessment.

Russia denies that the exercise focuses on any one potential foe.

“Vostok 2018 is not directed against other countries and is in line with our military doctrine, which is defensive in character,” said Nikolay Lakhonin, a spokesman for the Russian embassy in Washington.

But the U.S. military has called on Russia to disclose more about the exercise.

“While Russia retains the right to exercise on its own territory, we urge Russia to take steps to share information regarding its exercises and operations,” said European Command spokesman Lt. Cmdr. Joseph Hontz.

For the Chinese, meanwhile, the war games are “an opportunity to learn some lessons on mobilization and force deployment from the Russians, which are areas where China has a long way to go,” said retired Maj. Gen. Bill Hix, who until this spring helped oversee the U.S. Army’s efforts to modernize for a potential future conflict with a major power and watches Russian military developments closely.

Read this next: Steve Bannon praises Orbán and Salvini