BERLIN — Friedrich Merz, a leading candidate to replace Angela Merkel as leader of Germany’s Christian Democrats, called on Berlin to play a more active role in shaping the EU’s future.

“This country has to sit in the driver’s seat to bring the EU forward in terms of growth and prosperity,” Merz said Thursday at a Chatham House event in Berlin.

He argued that Germany had an obligation to be more proactive because it has benefited most from the euro, which he described as “artificially weak.” The European Central Bank’s loose monetary policy has helped make German exports more competitive than they would have been under the Deutsche Mark, he said.

“This is one of the fundamental reasons for our strength,” said Merz, a corporate lawyer who threw his hat into the ring to replace Merkel last week. “We have to do more.”

While such sentiments are often expressed by economists, it’s less common to hear them from the mouths of conservative politicians in Germany, who typically ascribe the country’s success to its work ethic.

Merz, a former leader of the center-right’s parliamentary group, is often described as pro-business and culturally conservative. But he has been out of the limelight for nearly 15 years, so his views on reforming Europe and other policy priorities aren’t well-known.

While he offered few specifics Thursday, Merz’s comments signaled he might be more open to retooling the eurozone than other conservative voices in his party.

Citing the growing competition Europe faces from China and other corners of the world, Merz said it was incumbent on Germany to seize the initiative, if only to preserve its own prosperity.

“Germans have to become faster and better and that’s only possible with our European partners,” he said.

He said the country’s economic strength in recent years had left many Germans blissfully unaware of the economic challenges many Europeans face and the repercussions of that weakness for the German economy.

“Even though the ice is getting thinner and thinner, people aren’t aware of the problems,” he said.

In a swipe at Merkel, with whom he has deep policy differences, Merz said Germany should have offered “more profound“ responses to EU reform proposals put forward last year by French President Emmanuel Macron.

If the two sides can’t agree on a eurozone budget or finance minister, which Merz described as old French ideas, Berlin and Paris should instead focus on concrete projects, such improving digital infrastructure.

Bemoaning a “lack of urgency” across the EU in terms of the economic challenges, he described Brexit as “the biggest threat” to the bloc, adding that both sides would be damaged. Nonetheless, he said it was now inevitable.

“It will have a major impact on our growth in continental Europe,” he said. “We have to face it.”

Merz is backed by powerful forces in the party, including ex-finance minister Wolfgang Schäuble.

Even if a second referendum was held and it reversed the original decision, that would only make Brexiteers “more radical” and further divide the U.K., he said.

Merz and CDU Secretary-General Annegret Kramp-Karrenbauer, a close Merkel ally, are the leading contenders to replace Merkel as party leader at convention scheduled for December 7. Merz, 62, is regarded as the more conservative of the two.

The final decision will be made by about 1,000 delegates and so far there’s little indication as to which candidate has the upper hand. The party has planned a series of regional conferences in the coming weeks to allow the candidates to make their case. 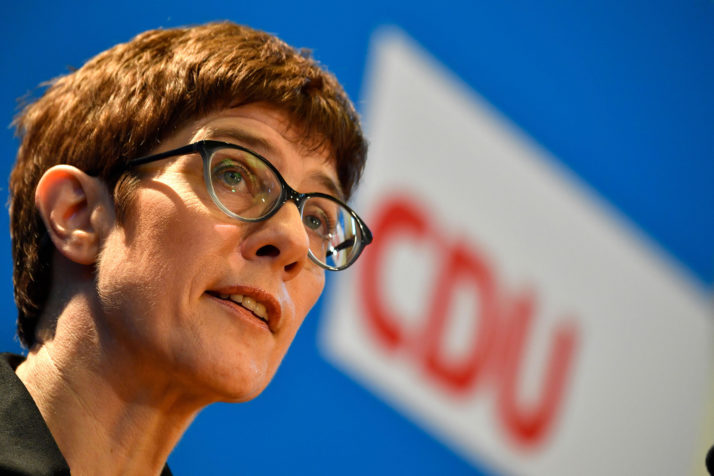 While Merz is backed by powerful forces in the party, including ex-finance minister Wolfgang Schäuble, some in the CDU worry that Merz’s reputation as an advocate for big business and his close association with a number of financial institutions, including investment giant BlackRock, where he serves as chairman in Germany, could alienate voters.

Earlier this week German prosecutors searched BlackRock’s Munich offices in connection with a trading scandal. Though the probe involves activities that pre-date Merz’s tenure with the firm, the raid offered a potent reminder of the pitfalls the CDU could face by selecting a leader from the world of finance, which many Germans distrust.

Read this next: After Sessions, who will Trump dump next?