Home Politics Fear and loathing on the Swedish campaign trail 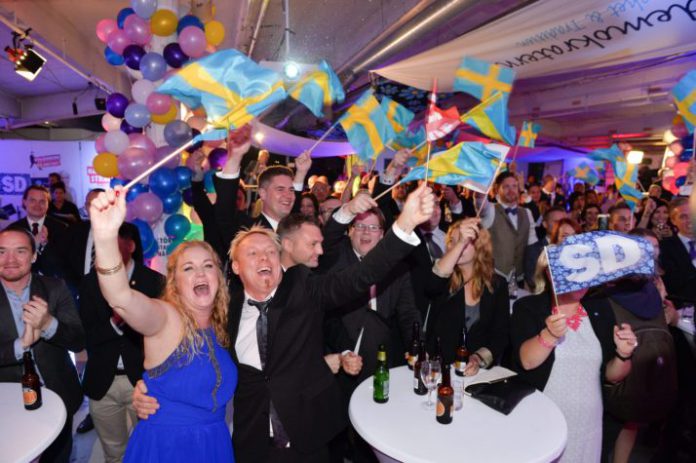 Divisive and deliberately provocative, the far-right Sweden Democrats (SD) are shaking things up ahead of a general election on September 9.

“Voters want to see more action,” said Tobias Andersson, a candidate for parliament and head of the party’s youth wing. “They want to feel something is actually happening, that it is not the same old boring politics.”

It seems to be working. The party looks set to be the big winner at the ballot box next month and has surged to about 20 percent support or higher in opinion polls — from around 13 percent at the last election — which would make it the second largest party in the country.

But the rise of the far right has led to increased tension.

The SD’s closest parallel in the Nordic countries can be found in Denmark.

Earlier this month, in the central square of Eskilstuna, a small town about 80 miles west of Stockholm, all the main parties set up huts from which they could hand out flyers and seek to win over potential voters. Such pop-up campaign events are common in Swedish elections.

But trouble flared when half a dozen men arrived on bicycles and began haranguing SD workers and the people they were talking to.

“What the hell are you even doing here?” one of the men shouted at a woman who was reading a flyer, adding that she looked like an immigrant and it was disgraceful that she was talking to the anti-immigrant SD.

The girl squared up the heckler, saying that the party had “as much right to be here as anyone, and anyway I was born here.”

A few shouted insults later and the men got back on their bicycles and rode off.

Björn Näsman, a 44-year old volunteer for SD who works as a salesman, said the encounter has shaken him, but isn’t unusual. The previous week, SD representatives had attended a festival in a local suburb and been jeered and pelted with eggs, he said.

“One guy came out of a supermarket with a shopping trolley stacked this high with egg cartons,” he said, holding his hand out just above waist height. “We called the police in the end.”

“It’s a shame they don’t come and ask us some questions,” Näsman said. “They might find out we are not the monsters they think we are.”

Later, factory worker Gabriel Reyes stopped at the SD hut, asked some questions and was handed a flyer. As he walked away, he ripped it up.

“I gave them a chance to make their case but I don’t agree with it,” he said. “They say they are for a safer Sweden, but what they are really about is promoting inequality between races.”

Analysts say the party, which was founded in 1988, has succeeded in turning the entire election campaign toward areas where its views resonate with voters.

A survey by the pollster Novus in August showed SD’s immigration policies had much more support among voters than those of any other party; it also ranked joint second on healthcare and a close third on law and order.

The winning bloc is therefore likely to find it hard to govern without support from the other alliance or the SD.

“The Sweden Democrats have had a decisive effect on the political agenda,” said Niklas Bolin, a political scientist at Mid Sweden University.

SD’s success is part of a broader trend, from Donald Trump in the U.S. to the populist government in Italy. Yet its closest parallel in the Nordic countries can be found in Denmark.

The Danish People’s Party finished second in the 2015 election. Although it has stayed outside government, the party offers tacit support to center-right Prime Minister Lars Løkke Rasmussen in exchange for a say on immigration policy.

During a summer speech to supporters, Åkesson played a video message from DPP leader Kristian Thulesen Dahl wishing SD the best of luck, and Åkesson thinks the Danish model is a good one for his party.

“I don’t think we will be in government after the election but we are going to have considerable influence over policy,” he said in an interview with Swedish public service radio in mid-August.

The more traditional parties agree that the SD won’t be in government. 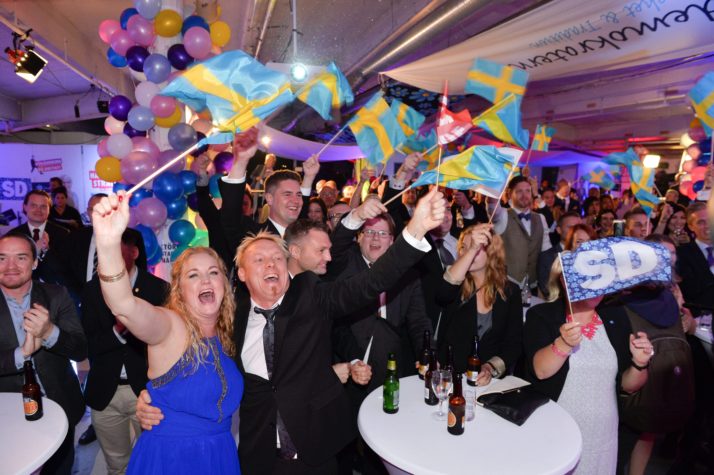 Both a Social Democrat-led center-left bloc of three parties and a Moderate Party-led bloc of four center-right parties have said they will not work with SD after the election, although the Moderates have reached out to the SD since the last election before backing away.

The two blocs are currently tied in the polls, with neither on course for a majority. The winning bloc is therefore likely to find it hard to govern without support from the other alliance or the SD.

“The Sweden Democrats will hold the balance of power, plus they will be bigger than before,” said political scientist Bolin.

Migration on the agenda

While the rise of the SD predates Europe’s immigration crisis of 2015, its support has risen in the wake of it.

Along with Germany, Sweden was at the forefront of welcoming asylum seekers from Syria and other war zones — it took in 163,000 asylum seekers in 2015 alone. Sweden has since tightened its laws on how long asylum seekers can stay in the country and made it tougher for family members to join them, but SD has maintained its call for further restrictions.

SD supporters say the country’s public services are being overwhelmed and they buy Åkesson’s description of immigrants as little more than a drain on the system. He wants virtually all immigration halted and a much more rapid return of failed asylum seekers to their country of origin. 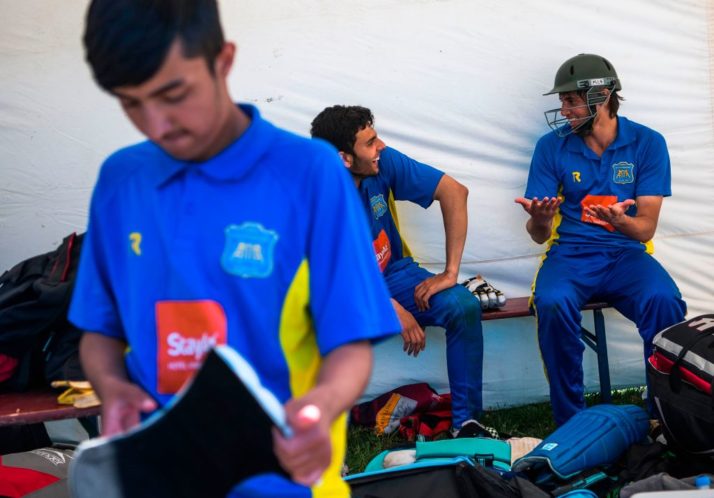 “We are the only party which prioritises the interests and welfare of Swedish citizens ahead of mass-immigration,” Åkesson said in his summer speech.

Åkesson is due to address a gathering in Gothenburg later this month. The youth movement of the Left Party, which supports the center-left government in parliament, has said it plans to disrupt the meeting.

“Do we want racists to speak unchallenged? Of course not,” the group wrote on social media.

The SD disagrees with that description. In 2012, the party introduced a policy of zero tolerance of racism, and several members who breached its code of conduct have left or been expelled in the years since.

Party strategist Mattias Karlsson said SD is committed to anti-racism. “We have to concentrate on building support for the party, but also keeping it clean,” he said.

In Eskilstuna, SD youth leader Andersson posed for photos with supporters. He said he planned to be in a different Swedish town every day that week.

“People need to take a moment and think about the fact that one person in four that they meet in their daily lives now supports the Sweden Democrats,” he said.

Read this next: ‘Mamma Mia!’ dash for most important job in EU banking