After a chaotic weekend of intense negotiations, London and Brussels fell short of a Brexit deal but emerged seeing eye-to-eye on a crucial point: It’s time to bring in the big shots.

“It was never assumed [a] deal was going to be done today,” a U.K. official familiar with the hour-to-hour progress of Sunday’s intense talks said. “It was just the time to move technical negotiations on a political level.”

A diplomat from one of the 27 EU nations negotiating with Britain offered a strikingly similar assessment, saying that, “It’s now time for politicians to step in and take over.”

British and EU officials have long predicted that U.K. Prime Minister Theresa May and Commission President Jean-Claude Juncker, possibly with other European leaders, would have to get directly involved in the negotiations before a final deal is clinched — just as they intervened personally last December to secure “sufficient progress” in the first stage of the divorce talks.

That moment appears to have arrived.

May has an open invitation to meet her counterparts who are planning to discuss Brexit at an EU27 leaders’ summit dinner on Wednesday. Downing Street officials on Sunday evening were not able to confirm whether the prime minister would attend.

In Brussels, at least, many had hoped that a tentative deal would be on the table even before the first hors d’oeuvre — a hope that was jarringly dispelled on Sunday, when the EU negotiator, Michel Barnier, announced Sunday evening that talks had hit a wall. His announcement followed an unscheduled face-to-face meeting in Brussels with the British counterpart, Dominic Raab, at which the Brexit secretary raised U.K. objections to a deal that three EU diplomats and one U.K. official said had been agreed tentatively at technical level.

We met today @DominicRaab and UK negotiating team. Despite intense efforts, some key issues are still open, including the backstop for IE/NI to avoid a hard border. I will debrief the EU27 and @Europarl_EN on the #Brexit negotiations.

The main sticking point remains the same as it has been for months — a standoff over how to construct a so-called “backstop,” a legal guarantee to prevent the need for a hard border between Ireland and Northern Ireland, if the U.K. and EU fail to agree on a future trade relationship.

Reaching a deal on the border issue will require one side — or both — to redraw longstanding redlines in the negotiations, something that Barnier and Raab were clearly not empowered to do on Sunday. For Raab, a phone call with May could suffice. For Barnier, it is more complicated, requiring authorization from the EU27 heads of state and government. Diplomats were on duty throughout the weekend, alert to the possibility of just such a request. It never came.

A hastily arranged meeting of EU diplomats on Sunday evening where officials hoped to hear Barnier outline the contours of a tentative accord instead took on the air of a crisis session, with talks seemingly at another impasse. According to officials in attendance, at least one EU country urged that the focus shift urgently to disaster preparedness, amid the increasing likelihood of a no-deal Brexit.

Downing Street — perhaps fearing a brutal opening of the financial markets on Monday — issued a statement putting a brave face on the failure to find an agreement over the weekend, insisting that there was still a possibility for a breakthrough by the time leaders gather in Brussels on Wednesday.

“In the last few days U.K. and EU negotiators have made real progress in a number of key areas,” a spokesperson said. “However there remain a number of unresolved issues relating to the backstop. The U.K. is still committed to making progress at the October European Council.”

While the Irish backstop is the main outstanding issue in the withdrawal treaty, it is hardly the only obstacle to an accord. Negotiations have yet to begin in earnest over the so-called “political declaration” that will accompany the formal withdrawal treaty. The document is intended to set forth the framework of the future relationship between the EU and the U.K. and is crucial for many MPs and MEPs who are suspicious of signing off on a deal without a clear idea about what the U.K.’s future outside the EU looks like.

Even under the most optimistic scenarios, no agreement was expected on the political declaration before a special European Council summit in November. European Council President Donald Tusk has said that the November meeting would only be scheduled if it was clear that a Brexit agreement was close at hand. Otherwise, the next scheduled EU leaders’ meeting is in December.

In their continuing effort to maintain pressure on London, EU officials on Sunday evening stressed that no further negotiations were scheduled before Wednesday’s summit.

But the impetus for any concession by May is widely expected to come not from strong-arming by Brussels but from factors within the U.K. itself, including the reaction of financial markets to the increasing risk of a no-deal Brexit. For many officials close to the negotiations, the main question has long been not whether May is willing to reach a deal, but if she will ever be able to sell a deal back home, given her tenuous political position.

Among May’s biggest obstacles to cutting a final deal on the Ireland border is a threat by the Democratic Unionist Party (DUP) leader, Arlene Foster, in Northern Ireland to vote against a deal and potentially bring down May’s government. There were also reports that May would face yet another potential Cabinet revolt if she agreed to a deal that would keep the entire U.K. in the EU customs union for an indefinite period.

And to add to the pressure on May, potential leadership rival and former Foreign Secretary Boris Johnson wrote in his regular Telegraph column that the U.K. was being offered a false choice between “two exquisitely embarrassing varieties of humiliation.” He added that May’s negotiating stance was a “catastrophe for Brexit, and makes a mockery of the project.”

“Time is running out, there is no doubt about that” — Adrian O’Neill, Ireland’s ambassador to the U.K.

If so, it was the second time in a matter of weeks that officials badly miscalculated. A summit meeting in Salzburg, Austria that both sides hoped would showcase renewed commitment and cooperation in working toward a deal instead ended in a debacle, with the EU flatly rejecting the core elements of May’s proposal for a post-Brexit relationship.

That could be a worrying trend given that many experts believe that a no-deal Brexit would most likely result not from one side consciously choosing to end the negotiations, but rather as the accidental outcome of some unforeseen and mismanaged chain of events.

Brussels has intensified its preparedness efforts for a no-deal scenario, including the development of a new paper describing many aspects of the disaster-planning in detail. European Commission officials, however, have refrained from publishing the paper to avoid sending any signal that the EU was losing faith in the negotiations. 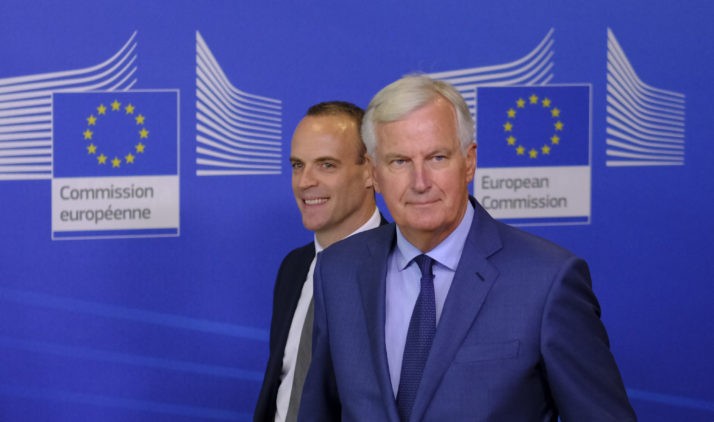 Ireland’s ambassador to the U.K., Adrian O’Neill, said next month’s EU summit could turn out to be an emergency session to discussion plans for a “no deal.”

“Time is running out, there is no doubt about that,” he told the BBC Radio 4. “In all member states preparation for all eventualities are ramping up quite significantly.”

For now, Brussels and London insist that a no-deal result can still be avoided.

“On our side, we still want to go into the October European Council constructively and make progress,” the U.K. official said.

Read this next: Planes, cars and regulators: Mobility revolution puts Brussels under pressure