LISBON — It was more TED talk than campaign stump speech.

In a Lisbon hotel ballroom, Alexander Stubb was making his pitch to be the European People’s Party nominee for European Commission president, telling young conservatives about the risks and possibilities of the Fourth Industrial Revolution.

To the EU’s usual worries about populism and Brexit, Stubb added digital dictatorships, DNA manipulation and a looming clash between humans and robots for economic relevance.

“Your lives are going to be extremely disruptive in comparison to our lives,” Stubb, a 50-year-old former Finnish prime minister, said at the Friday night dinner event. “The skills that you’ll have to have in life are going to be completely different.”

The crowd was eating it up. If only they could actually vote in the EPP contest, Stubb would have a much better shot at winning.

Instead, as more than 700 delegates from the EU’s dominant center-right party prepare to gather for a congress in Helsinki later this week where they will choose their Spitzenkandidat or “lead candidate,” Stubb is almost certain to lose to Manfred Weber, the German leader of the EPP group in the European Parliament.

Despite Stubb’s efforts to give the process the air of a primary campaign, it remains an insider’s game. Weber, with the support of the EPP leadership, including its president Joseph Daul, refused Stubb’s requests to hold open, public debates. Instead, they will exchange views for just a half-hour at the EPP conference, on the day before the vote.

Weber has been endorsed by all of the EPP’s current heads of state and government, and most of its national member parties. And the widespread view that the process has been a stitch-up from the start has been bolstered by speculation that Weber may simply be a placeholder for German Chancellor Angela Merkel, who last week announced her plans to retire from national politics.

While Merkel says she intends to stay on as chancellor until the end of her mandate in 2021, many of her fans in Brussels hope that a top EU job might be preferable to staying in Berlin as a lame duck.

Stubb has refused to accept his fate, and instead continued to push his candidacy on social media and in public appearances.

“There is a clear prevailing element — an aura around Weber,” a senior, influential EPP member said. “You will not find many people around who can say Manfred will be challenged.”

Indeed, the only question party insiders seem to be asking — given that delegates in Helsinki will cast their votes by secret ballot — is how wide a margin of victory Weber will achieve. “There is an element of curiosity there,” the senior EPP member said. “Will the result be 70 to 30? 60 to 40?”

Weber, in a speech to an EPP youth conference in Athens on Saturday, thanked Stubb “for the fair and good competition we had in the last weeks” and touted his endorsements. “Democracy starts always with standing in front of people and telling people, ‘Yes, I’m ready. I want to do it. I am a candidate.’ And then you and people decide afterwards,” Weber said. “That is democracy. That is what we are doing in the EPP, and that is what we will also do afterwards in our election campaign.” He added, “For me it is helpful to have the support of all our EPP members in the European Council.”

Paulo Rangel, a Portuguese MEP and vice president of the EPP group, defended the process, saying the EPP was the only party with two candidates competing vigorously for its nomination. He said the Spitzenkandidat process had proven successful in replicating at an EU level the process by which parliamentary democracies choose a head of government.

Rangel noted that backroom efforts by Merkel and former U.K. Prime Minister David Cameron to block Jean-Claude Juncker from becoming Commission president in 2014 had failed, and no Spitzenkadidat could succeed without the support of a majority in the European Parliament.

But supporters of Stubb are not the only ones who suspect the Spitzenkandidat process is rigged — not just for Weber but to benefit the EPP, which currently holds all three of the EU’s top jobs, and is expected to win the most seats in May’s European Parliament election. The EU’s leading liberal political family, the Alliance of Liberals and Democrats for Europe, has refused to put forward a Spitzenkandidat, saying the process is designed to install a conservative as Commission president. 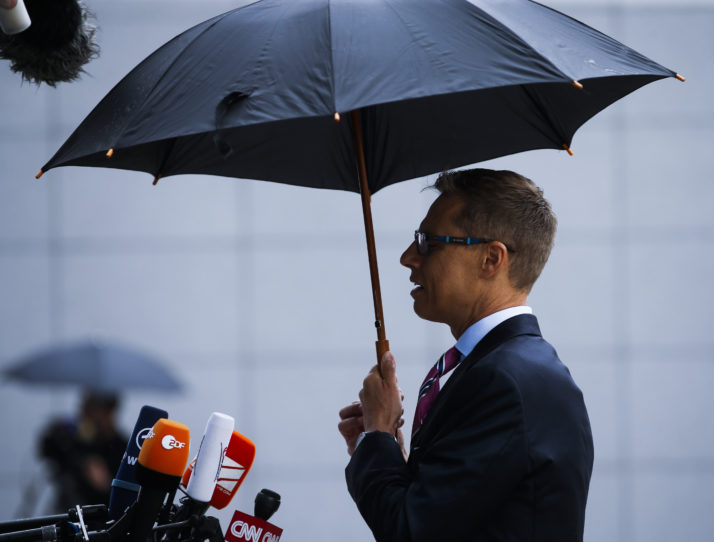 In the EU, however, winning is not necessarily everything. How you lose can also matter a lot — as Michel Barnier, who finished second to Juncker in the 2014 EPP nominating competition, can testify.

And so Stubb has refused to accept his fate, and instead continued to push his candidacy on social media and in public appearances.

A final campaign swing last week took him to the capitals of some of the EU’s biggest battleground states: Bucharest, Warsaw, Paris and Lisbon. He then went on to an EPP youth conference in Athens on Saturday, where he crossed paths with Weber — but not too closely. They gave separate speeches; Weber on Saturday morning and Stubb in the afternoon.

In his prepared remarks in Lisbon, Stubb mostly steered clear of politics, and instead gave a lecture on the political and societal challenges of the early 21st century.

“We are going to live in a world where there is going to be so much information that that information could actually start killing our capacity to think unilaterally or think analytically about what’s going on in the world,” he said, adding: “In the old days it used to be the old guy in the village who had all the wisdom, now it’s actually the young kids, you know, on YouTube.”

At one point, he stepped away from the lectern to grab a glass of wine off a table, and took a sip — a seemingly spontaneous move to show how he is unlike traditional politicians, just a normal guy having a drink among friends. It was rewarded with robust applause.

He railed against populist politicians who employ hate-mongering and fear to foment anger against the liberal democratic establishment.

And yet, at the same time, Stubb included a heavy dose of fear — admittedly apolitical — in his own speech, telling his audience: “Technology could potentially be fantastic, but it could also be what ends us as homo sapiens as we know it.”

“If populism means simplifying a complicated message but trying to find a solution to a complicated problem, then I am happy to be a good populist” — Alexander Stubb

In other words, why worry about populists when Armageddon is on the horizon? But of course the EU can save the day. “I think that actually Europe is the solution not the problem in this,” Stubb said, “if and when we need to start regulating first the economy and work, then politics and media and then finally science and the future of mankind.”

The crowd loved it, and kept him in the ballroom answering questions late into the night. Amish Laxmidas, a 23-year-old conservative activist, based his question on a metaphor for the EU drawn from DC Comics.

“Before Batman comes, Gotham was facing trouble, injustice, it was facing fear,” said Laxmidas, who works for a nonprofit that fights infectious diseases. “My question: is your way of doing politics good populism? Are you the face of new populism and is good populism the solution to bad populism?”

Stubb, who can boast of being an Ironman triathlete, didn’t take the superhero bait, but he was happy to answer.

“If populism means simplifying a complicated message but trying to find a solution to a complicated problem, then I am happy to be a good populist,” he said, adding that he has a problem with “the negative populists … that use hate and fear, and so on. Because that’s so easy. It’s so easy to walk around Europe and say that you know migration sucks, technology sucks, the Polish plumber sucks.

“That to my mind is the wrong way to be in politics,” he added. “I have always wanted to lead more with hope, armed with solutions.”

Laxmidas said he supported Stubb’s demand for public debates, that EPP leaders were wrong to describe the nominating process as an internal party affair, and that vigorous campaigning should only begin once a nominee is chosen.

“I hope you get your Batmobile,” conservative activist Amish Laxmidas told Stubb, “and start riding for the future of Europe.”

Sofia Paiva, a 22-year-old university student, wanted Stubb to explain how he might persuade pro-EU governments to stop criticizing Brussels for anything that goes wrong in Europe, while taking credit for any political success.

Paiva said she also wanted to see the EPP candidates face off in a debate. “When there is no debate, there is no compromise, there is no politics,” she said. “There’s no anything.” Paiva said she preferred Stubb over Weber because he was less conservative, and hoped he would pull off an upset.

“I am still hoping that he can convince individual delegates to turn because the vote is secret, they can still not go with the country’s decision, or the delegation’s decision to vote for Manfred Weber,” she said.

Laxmidas was a bit more dramatic in his endorsement. “I hope you get your Batmobile,” he told Stubb, “and start riding for the future of Europe.”

Read this next: Macron ramps up EU power play with pitch to liberals