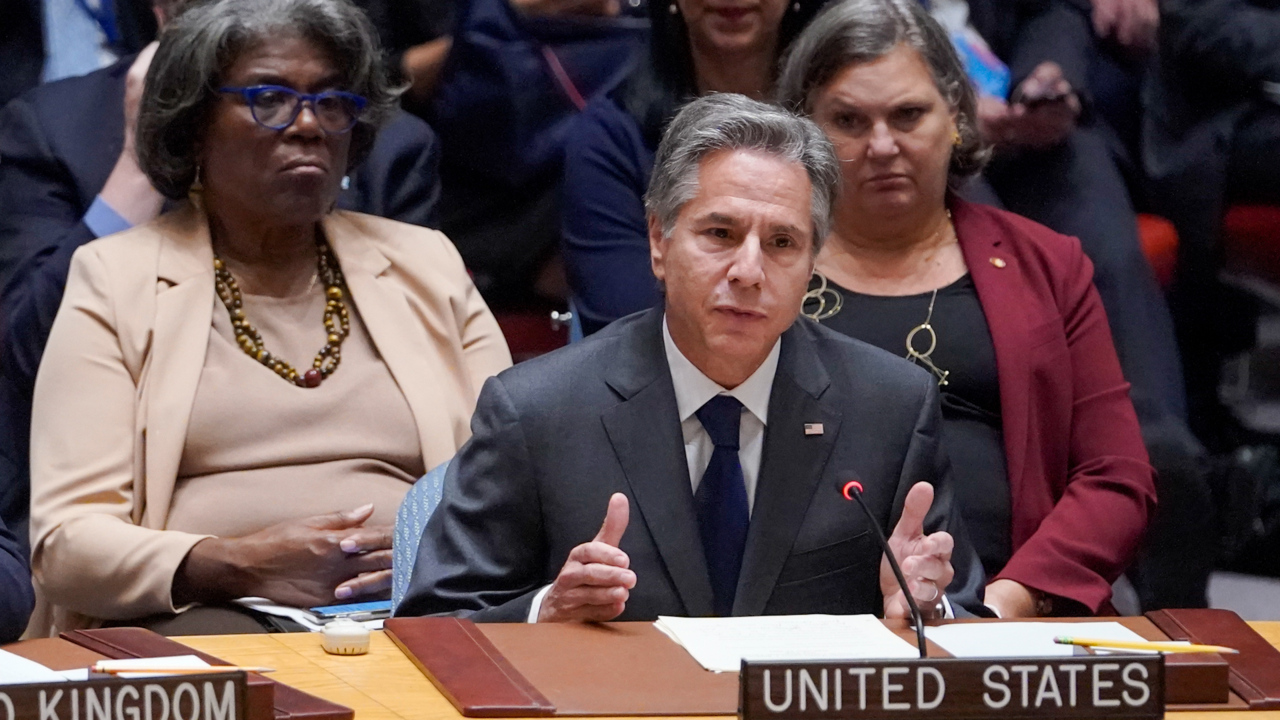 “We must confront these threats together. There is no place for neutrality,” he added, a reference to the many countries in Africa, Latin America and elsewhere that have tried to avoid taking sides while calling for an end to the war.

The gathering simultaneously showed off both the importance and the impotence of the U.N.’s most important body. On the one hand, the Security Council offers a highly visible forum for diplomatic exchange. On the other hand, with countries like Russia as veto-wielding permanent council members, the council’s ability to initiate any action is highly limited.

At times, the various foreign ministers’ words sounded like they were generated from some app. Words like “diplomacy,” “humanity” and “international law” were tossed around like badminton birdies in extra-slow motion. It was as if the diplomats were going through the motions, knowing nothing meaningful would come of the session.

“The reasonable security concerns of all countries should be taken seriously,” China’s Foreign Minister Wang Yi said at one juncture.

Still, it was a rare in-person gathering for the U.S. secretary of State and his Russian counterpart, not to mention Ukraine’s top diplomat. It forced Russia to say something — even if that something was highly suspect — to defend its full-scale war on its neighbor. And it gave countries affected by the food and energy crises spurred by the war a chance to air their frustrations.

Secretary of State Antony Blinken, in measured but firm tones, slammed Russia’s autocratic President Vladimir Putin, who just this week announced plans to escalate the war through the mobilization of hundreds of thousands of new troops. He also issued a veiled threat of nuclear war.

Such a move “shows his utter contempt for the U.N. charter, for the General Assembly and for this council,” Blinken said of Putin. “The international order that we gathered here to uphold is being shredded before our eyes.”

Lavrov, a veteran and often grumpy Russian diplomat, arrived well after Blinken had spoken and left quickly after giving his own remarks. He used his time to accuse Ukraine’s government of being “Nazi-like” and taking aggressive actions against Russia for many years. Russia was merely defending itself and civilians under threat by the government in Kyiv, Lavrov claimed.

“The Kyiv regime owes its impunity to its Western sponsors, first of all Germany and France, but also the United States,” Lavrov said, accusing Kyiv of discriminating against Russian-speakers, among other elements of “Russo-phobia.” The Russian foreign minister said the Kremlin has “no doubt that Ukraine has become a completely totalitarian Nazi-like state,” a verifiably false depiction of Kyiv’s developing Western-style democracy.

“Lavrov apparently couldn’t bear to hear the clear and repeated messages of condemnation of Russia’s war against Ukraine,” a U.S. official told POLITICO. “It’s another sign of weakness and a testament to the fact that Russians recognize they are increasingly isolated on the world stage.”

Lavrov acted in a similar fashion in July during a meeting of the G-20 group of countries’ foreign ministers, though several Western representatives there also took care to shun him. There have been very few high-level diplomatic contacts between Washington and Moscow since the Russian full-scale invasion began in February. Russians have been fighting Ukraine in some areas of Ukraine since 2014.

Lavrov did not stay in person to listen to Kuleba, whose comments were among the most eloquent Thursday. The Ukrainian spoke in the wake of several major Ukrainian battlefield victories against Russia, whose troops have been forced to retreat from large areas.

“Today, every Ukrainian is a weapon ready to defend Ukraine and the principles enshrined in the U.N. Charter. Russia will fail,” Kuleba declared, slamming the “lies” of his Russian counterpart. “We have never wanted this war and never chose it.”

In response to Lavrov walking out of the meeting, Kuleba said: “Russian diplomats flee almost as quickly as Russian soldiers.”