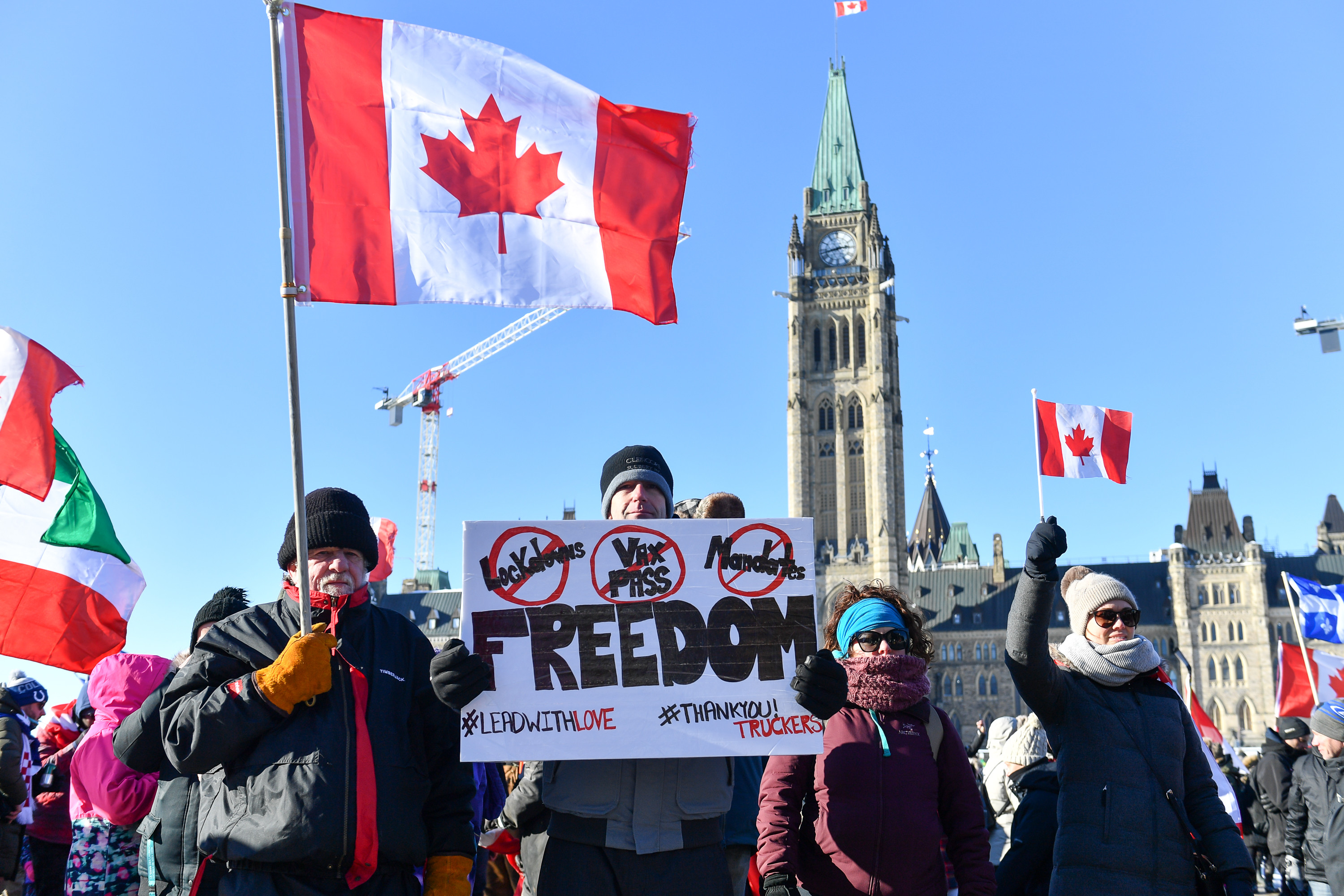 Politicians from former President Donald Trump to Rep. Marjorie Taylor Greene (R-Ga.) have championed the nationwide protests in Canada, which began in response to Ottawa’s vaccine mandate for truckers entering Canada. It has quickly escalated into a global movement incorporating a loose set of anti-establishment causes, coordinated on social media and encrypted messaging groups.

On Telegram, a social network favored by the far-right because of its lack of content moderation, groups of tens of thousands of supporters have quickly mobilized to support the Canadian protests from across the United States, European Union and farther afield, based on POLITICO’s review of these channels.

On multiple crowdfunding platforms, people from around the globe — often directed to the cause by American far-right influencers like Dan Bongino and Ben Shapiro — have collectively donated millions of dollars in support of the Canadian movement and started similar crowdfunding campaigns for like-minded protests in U.S. states and European countries.

“[R]ightwing U.S. political figures and content creators … really gave it a boost that made it global,” said Ciaran O’Connor, an analyst from the Institute for Strategic Dialogue, a think tank that tracks online extremism and which has been following the Canadian protests against the Covid-19 restrictions.

“Donations from abroad are quite a common part of any large crowdfunding campaign,” he added. “But the scale of this one is unprecedented.”

The global backing of Canada’s so-called truckers’ convoy comes amid a growing level of sophistication among anti-vaccine groups in coordinating operations online and in the real world.

Since the beginning of the pandemic in early 2020, people opposed to government mask mandates, vaccine requirements and other public health measures have built close ties across social media, often turning to fringe networks after the likes of Facebook and Twitter began to clamp down on anti-vaccine misinformation in 2021.

This movement — which has primarily skewed toward right-wing politics — has been quick to jump on the latest anti-vaccine protests to promote a coordinated global message that policymakers’ efforts to keep people safe from the coronavirus are, instead, anti-democratic restrictions on individual freedoms.

National security officials and researchers have seen this global coordination jump into gear during Canada’s ongoing protests — in a country that boasts one of the world’s highest vaccine rates.

Since late January, the likes of Glenn Beck and Mike Huckabee have used their large online followings to spread the word about the truckers’ convoy, garnering tens of thousands of engagements including likes, shares and comments on social media posts in favor of the protests, based on data from Crowdtangle, a social media analytics firm owned by Meta, Facebook’s parent company.

In a post from late January, Eric Trump questioned why media outlets were not discussing the Canadian protests. Franklin Graham, an American evangelical leader, praised the convoy in a post that read: “I love these guys — Canadian truckers standing for freedom.”

Between Jan. 22 and Feb. 5, more than 7,000 Facebook posts, which collectively garnered almost 10 million social media interactions, mentioned the truckers’ convoy on U.S.-based Facebook pages, based on Crowdtangle data provided to POLITICO by the Institute for Strategic Dialogue.

The demonstrators are “highly organized, well funded, extremely committed to resisting all attempts to end the demonstrations safely,” said Ottawa Police Chief Peter Sloly, who added that a “significant element from the United States” was involved in the funding and organization of the truckers’ convoy.

On Telegram, groups with tens of thousands of members routinely swap the latest gossip about how the Canadian protests are going and share tips on how to spread the word beyond the country’s borders.

In one message, posted to at least 10 channels with ties to the truckers’ convoy and reviewed by POLITICO, an anonymous social media user outlined how those involved in the protests should conduct themselves, warning to avoid contact with counter-protestors.

“Do NOT try to reason with them. They are there to bait you. They have the national news outlets onsite waiting to capture people losing it,” the post warned. “Any excuses to show that the truckers’ convoy is violent.”

From social media to crowdfunding

Social media support has snowballed with protest coverage from right-leaning media like Fox News and more extreme outlets like Canada’s Rebel News. It also has translated into international donors backing the Canadian protests via crowdfunding platforms like GoFundMe.

On Feb. 4, GoFundMe removed the donation page for the “Freedom Convoy 2022,” noting that the demonstrations had changed from peaceful demonstrations into an occupation, violating the company’s terms of service.

Analysis from the Institute for Strategic Dialogue found multiple U.S. right-wing groups, including those associated with the Tea Party Movement and others opposing U.S. vaccine mandates, had donated to the now-defunct GoFundMe page, as well as similar groups from Europe and Australia.

That international backing, in part, was driven by several U.S.-focused white supremacist channels on Telegram, which had repeatedly shared a link to the GoFundMe page. On 4Chan, an online message board favored by extremists groups, the same link had been posted at least 25 times between Jan. 28 and Feb. 5, based on research from the Institute for Strategic Dialogue.

The removal of the GoFundMe donation page has not stopped the international financial support from flowing in.

On GiveSendGo — a rival crowdfunding site that was previously used to raise money for the legal defense of Kyle Rittenhouse, the U.S. teenager acquitted of shooting and killing two men, and wounding a third, during the riots in Kenosha, Wisconsin in 2020 — a new page linked to the Canadian protests has already raised more than $2.1 million. The goal is to collect $16 million.

American right-wing influencers like Jack Posobiec — who has a Twitter following of 1.6 million — heavily promoted that crowdfunding page. People living in the U.S., Israel and the United Kingdom have donated to the cause, based on a review of the GiveSendGo site.

First Canada, next the world

Similar “convoys” are now being organized across the U.S. A Telegram channel boasting almost 40,000 followers is sharing updates on regional protests planned in states from Alabama to Wyoming, based on POLITICO’s review of social media activity.

The social media group provides regular updates on how to support the Canadian movement, including posts from more mainstream social media about the ongoing protests. It also acts as a rallying point for diverse communities who oppose official government vaccine policies. The goal, based on reams of social media messages, is to organize similar nationwide protests that will eventually descend on Washington, sometime in early March.

“Canada took eight months to plan their [protest,]” one of the Telegram channel organizers wrote on Feb. 5. “The U.S. is planning this all in weeks.”

The mass anti-vaccine organizing is not limited to just North America.

Since early February, similar protests have also sprouted up across Europe — often using encrypted Telegram channels and country-specific hashtags under which supporters can rally.

Many of these Telegram channels have voiced their opposition to violent protests. But the groups also have seen an influx of more extreme content, including the posting and resharing of antisemitic and white supremacist material.

Far-right groups have taken advantage of the Covid-19 pandemic to tap into the anti-government rhetoric of the anti-vaccine movement, repeatedly posting claims in these social media channels in favor of their extremist beliefs, based on POLITICO’s analysis of six months of social media activity.

Upcoming convoys are being planned in all 27 European Union countries. Organizers are also preparing to descend on Brussels — home to the EU’s main institutions — in force on Feb. 14.

In at least eight of these national Telegram groups, social media users shared advice on how to donate to local protest organizations, offered suggestions on how to push back against alleged government efforts to force people to be vaccinated and posted debunked claims about the ongoing Covid-19 pandemic and potential curbs on people’s freedoms.

In Ottawa, the trucker protests may be settling in for the long haul. But for supporters in the U.S. and elsewhere, they have offered a case study in how to bring anti-establishment sentiment into the mainstream.

“The Freedom Convoy paved the way,” said one of the organizers of the France-focused Telegram channel, with more than 22,000 followers, in reference to the Canadian protests. “Rest assured, we are not alone. We are in permanent contact with the Europe group in the organization of this liberation movement.”