Home Politics NATO will be ready if Russia talks fail 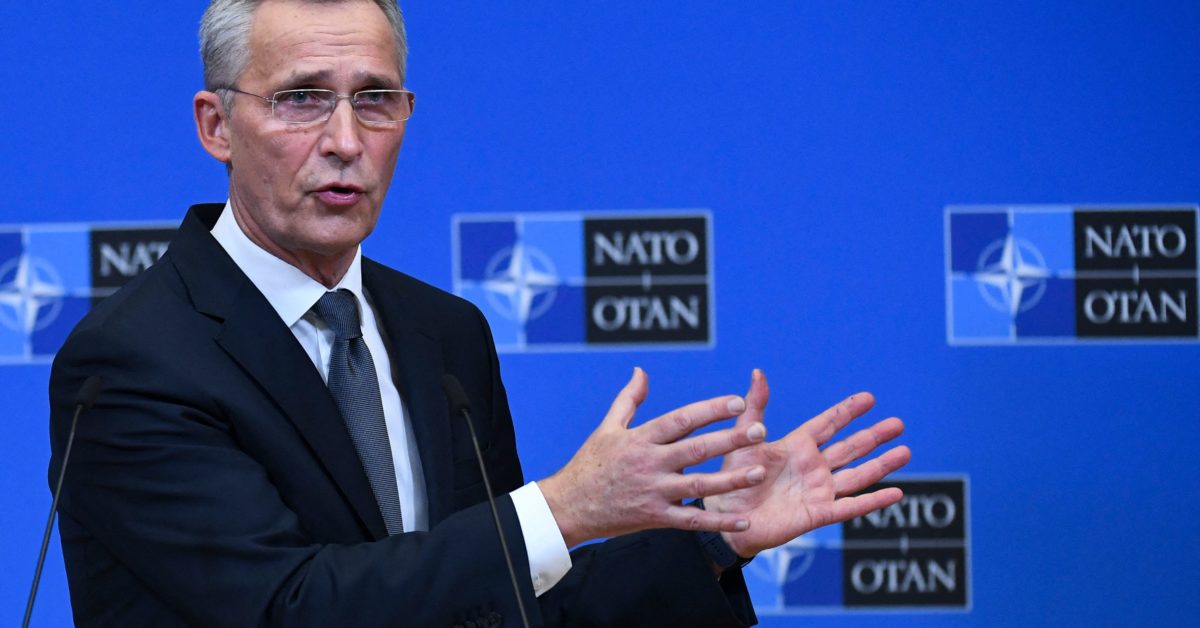 Press play to listen to this article

NATO Secretary-General Jens Stoltenberg said Friday that Western powers were bracing for the possibility that high-stakes talks with Russia could break down, and that the alliance was reinforcing military capabilities along its eastern flank as well as readying potentially crippling economic sanctions should Moscow attack Ukraine.

Stoltenberg’s remarks, following a videoconference of NATO foreign affairs ministers, delivered a pointed warning to the Kremlin ahead of a week of diplomatic talks — in Geneva, Brussels and Vienna —  that were set off by a major Russian military mobilization on the Ukrainian border, and by threats from President Vladimir Putin and other top Russian officials of an invasion should the United States and NATO allies not accede to a long list of security demands.

“NATO will engage in dialogue with Russia in good faith and on substance,” Stoltenberg said in his opening remarks at a news conference. “But we must also be prepared for the possibility that diplomacy will fail.”

Stoltenberg, the alliance’s top civilian leader, was cryptic when pressed for details, but insisted NATO would be ready to match any threat.

“I will not go into the exact numbers of how many troops we can move where, and when,” he said. “But I will say that we have significant capabilities. We have troops, we have forces. We have the readiness. We have the plans to be able to defend, protect all allies, and we are constantly adapting, and also actually investing more now than we had done for many years in modernizing our military capabilities to make sure that we preserve peace in Europe.”

Western diplomats have been reluctant to characterize the upcoming meetings as negotiations, insisting instead that they are willing to engage in dialogue with Moscow and that the conversations must involve a two-way exchange. For example, in response to the Kremlin’s demands that NATO back away from Russia’s borders and commit to never admitting Ukraine or Georgia as members, some Western diplomats have said Russia must acknowledge its own failures to live up to existing security commitments, such as eliminating stocks of chemical weapons.

The talks in Geneva will be followed by meetings later in the week of the Russia-NATO Council at alliance headquarters in Brussels, and at the Organization for Security and Cooperation in Europe in Vienna.

It is clear that Putin’s demands are the driving impetus for the meetings, and that there will be uncertain consequences if the sides cannot reach find some sort of agreement.

Stoltenberg, at his Friday news conference, said allies were hoping for a peaceful resolution but stressed that they would also be prepared for the talks to collapse, and he said that Russia, rather than pulling back, had only increased its military presence on the border in recent weeks.

“We will do whatever we can — make every effort to ensure a political way forward, preventing the use of force, preventing Russia from using military force against Ukraine,” he said. “But at the same time and in parallel we need to be prepared that the talks break down and that diplomacy will fail.”

Stoltenberg noted that Ukraine, as a NATO partner, was not protected under the alliance’s collective defense clause, known as Article 5, but that allies were intent on deterring Russia and protecting each other.

“One for all, all for one, this core principle idea of NATO that we stand together and an attack on one will be an attack on all, the purpose of that is not to provoke the conflict, but is to prevent the conflict,” he said. “Through our Article 5 commitment to defend and protect each other, we have been able to prevent, deter an attack on a NATO ally for more than 70 years. And that’s our purpose also now. So to remove any possible room for miscalculation in Moscow, we are constantly adjusting, adapting our military strength, our posture to make sure that there is no misunderstanding about that.”

But even as he insisted that NATO was focused on political dialogue, Stoltenberg appeared to rule out granting one of the Kremlin’s key requests, which is assurance that Ukraine and Georgia would never join the alliance. “We stand by our decisions at the Bucharest summit when it comes to Ukraine and Georgia,” he said. “We support and help them on their way towards further Euro-Atlantic integration.”

Stoltenberg suggested that Putin may be miscalculating if his goal is to limit NATO’s presence on Russia’s borders and that the renewed tensions might drive Sweden and Finland, longtime NATO partners and Russian neighbors, to seek to join the alliance. If they do, Stoltenberg said they would be welcome.

“My message is that this is for Finland and Sweden to decide if and when they feel ready to apply for membership in NATO,” he said.

Some senior European officials, including the EU’s foreign policy chief, Josep Borrell, have expressed reservations about the bilateral talks between Russia and the U.S., and have said that Brussels would insist on a role in any discussions that have direct implications for security in Europe. That message was reiterated on Friday in Paris, where French President Emmanuel Macron met with European Commission President Ursula von der Leyen to mark the start of France’s rotating presidency of the Council of the EU.