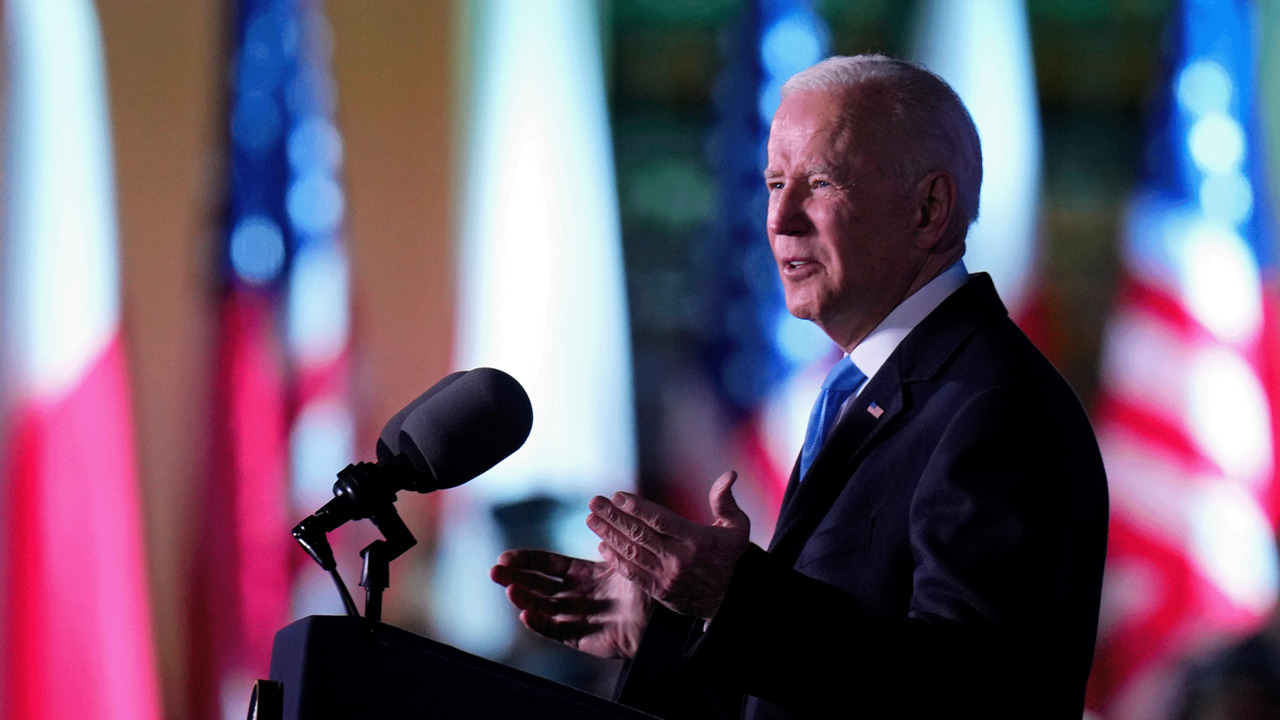 Biden, off the cuff, says Putin ‘cannot remain in power’

The line sent ripples throughout the U.S. foreign policy community, before the White House quickly clarified that Biden was not calling for regime change in his speech, contending that the president’s point was that Putin cannot be allowed to exercise power over his neighbors or the region. “He was not discussing Putin’s power in Russia, or regime change,” an official said in a statement.

But the walk back only prompted the question of why Biden uttered the line in the first place and whether he had consciously meant to convey the message. The words had not been in his prepared remarks.

Biden used the evening speech in Poland’s capital to rally American allies to be “clear-eyed” in a “battle between democracy and autocracy, between liberty and repression” that he warned requires vigilance and wouldn’t end soon.

“Ukraine will never be a victory for Russia, for free people refuse to live in a world of hopelessness and darkness,” Biden said from the Royal Palace in Warsaw, just before decamping from the three-day whirlwind of meetings with U.S. allies, troops near the border with Ukraine and a stop here to comfort refugees. “We will have a different future, a brighter future, rooted in democracy and principle, hope and light, of decency and dignity of freedom and possibilities.

Biden was traveling in Belgium and Poland, with the war across the border from NATO allies at the top of his agenda. “We stand with you,” he told the roughly 1,000 attendees Saturday, including Polish President Andrzej Duda and U.S. embassy staff. “Period.”

“Every generation has had to defeat democracy’s moral foes. That’s the way of the world. For the world is imperfect as we know. Where the appetites and ambitions of a few, seek to dominate the lives and liberty of many,” Biden said.

He started and ended the address discussing the lessons of Pope John Paul II, the late Catholic leader who is known in his native Poland as Jan Paweł II.

Richard Haass, the Council on Foreign Relations president, said Biden’s comments could reinforce Putin’s fears or belief that America is out to oust him from leadership and undermine an authoritarian Russia.

“The fact that it was so off-script in some ways makes it worse,” because it could be read as Biden’s genuine belief as opposed to his scripted words, Haas said.

It also could diminish Putin’s interest in compromise and increase his temptation to escalate in Ukraine, “because if he believes he has everything to lose then he’ll believe he has nothing to lose,” Haass said.

Haass said a senior Biden official, possibly the national security adviser or the secretary of state, needs to reach out to their Russian counterpart and explain that Biden’s comment was made in the heat of the moment, doesn’t reflect U.S. policy and that they remain committed to working with Russia to end the war in Ukraine.

Even before Biden’s misstatement, the trip laid bare America’s challenges and contradictions around Russia’s unprovoked war. Biden was greeted as the leader of the free world — even describing himself as such at the summit in NATO. Yet he’s struggled to translate his diplomatic momentum abroad with Americans back home. And pressure continues from officials in Kyiv who argue the results of the West’s collective actions have so far fallen short.

Sanctions on Putin, which were ratcheted up again this week on oligarch allies, political luminaries and financial institutions, have dealt Moscow a profound economic blow. But together with defensive support, they’ve done little to halt Russia’s war effort and instead are serving as another reminder of the allies’ powerlessness to halt Putin’s increasingly brutal assault on Ukraine.

On Saturday, Biden focused on the billions of dollars in aid to Ukraine and crippling sanctions that strike at the heart of the Russian economy. And he held up the alliance’s early resilience as proof that they are on the right side of history.

“There will always be demands for more to be done and many of those will be correct,” said Ian Lesser, vice president of the German Marshall Fund and an expert on NATO. “But by almost any measure the trip has been a success. It’s a vast symbolic success. And it was a necessary thing for him to do on many, many levels.”

Biden’s late decision to go to Europe was motivated in part by fears of losing early momentum with a large coalition of allies, senior aides acknowledged this week. Earlier Saturday, Biden met with Ukraine‘s foreign and defense ministers, joined by Secretary of State Antony Blinken and Defense Secretary Lloyd Austin to brief the Polish on their war efforts.

It was the president’s first time meeting in person with Ukrainian Foreign Minister Dmytro Kuleba and Defense Minister Oleksii Reznikov since the Russian invasion. Later, at the Presidential Palace in Warsaw, Biden sought to reassure Duda of the U.S.’s “sacred” commitment to defending NATO members.

But it was Biden’s stop at the refugee center inside a stadium that got to the personal nature of his appearance. There, he held a small girl and recalled how nearly every refugee he spoke with inside asked him to pray for family members fighting in the war back home. “I remember what it’s like when you have someone in a war zone. Every morning you get up and you wonder. You just wonder,” Biden said after. “You pray you don’t get that phone call.”

Asked about Putin’s role in the devastation and carnage in places like the leveled city of Mariupol, Ukraine, Biden didn’t hold back: “He’s a butcher.”

Biden said the fighting in Kyiv and Metropol and Kharkiv are the latest battles in a long struggle. “Over the last 30 years, the forces of autocracy have revived all across the globe,” he said in the speech. Its hallmarks are familiar ones, contempt for the rule of law, contempt for democratic freedom, contempt for the truth itself.”

Biden also said there was “simply no justification or provocation for Russia’s choice of war. … It’s nothing less than a direct challenge to the rule-based international order established since the end of World War II. And it threatens to return to decades of war that ravaged Europe before the international rule-based order was put in place. We cannot go back to that.”

Speaking directly to the Russian people, Biden said: “This is not who you are. This is not the future you deserve for your families and your children. I’m telling you the truth. This war is not worthy of you, the Russian people. Putin can and must end this war. The American people will stand with you.”

Biden said Putin was “counting on a divided NATO” — which Biden repeatedly has said has not happened — and that the U.S. and Poland need to stay in “constant contact.”

“America’s ability to meet its role in other parts of the world rests upon a united Europe and a secure Europe,” Biden said. “Stability in Europe is critically important to the United States in terms of our interest not only in Europe, but around the world.”

Biden also alluded to the “great sense of threat” the Polish people are feeling from extensive Russian shelling just 10 miles from their border. Some 2 million Ukrainian refugees have fled across the western border to Poland.

Biden’s Warsaw tour came as Russia appeared to shift its aggressive focus from the Ukrainian capital of Kyiv to undertake a renewed effort to consolidate control in the disputed region of Donbas in the east, according to Russian and U.S. officials.

“We think they’re trying to cut off the Donbas area,” a senior defense official told reporters at the Pentagon Friday, “they are putting their priorities and their efforts in the east of Ukraine, and that’s where still there remains a lot of heavy fighting.”

However, Biden on Saturday seemed to cast some doubt on that assessment. Asked by a reporter whether he thinks Russia has changed its strategy, he replied, “I am not sure they have.”

The stalled Russian offensive in the north and west of Kyiv has been a major concern for the Kremlin, which has seen heavy troop losses and plummeting morale, according to U.S. officials. At the same time, Russia has intensified its assault on the northern city of Chernihiv and the western city of Lviv, some 40 miles from the Polish border, which on Saturday was the site of a Russian shelling of a fuel depot.